It’s a good time to be a Batman fan. After years of suffering through horrible films like Batman Forever and Batman and Robin, Bat-fans were finally rewarded when Christopher Nolan single-handedly saved the franchise with Batman Begins and this summer’s juggernaut The Dark Knight.

And while The Dark Knight may go down in history as the best Batman film ever made (and Heath Ledger’s haunting portrayal of The Joker will undoubtedly be remembered for years to come), there is one problem with the film – it’s not really for kids.

Older fans like myself love Nolan’s dark, brooding version of Batman. While having a grown man dressed like a giant bat battling criminals still seems quite improbable, Nolan has worked hard to make his version of Gotham City as grounded in reality and plausible as possible. If Batman did actually exist, he would probably live in Nolan’s universe.

And while I could watch The Dark Knight over and over again without ever getting tired of it, I still wouldn’t show it to a seven-year-old. Something tells me little kids just won’t appreciate the dark humor of The Joker’s memorable disappearing pencil trick.

So how can a savvy network capitalize on the popularity of The Dark Knight by launching their own animated Batman series without making a show that would be unsuitable for children? The Cartoon Network has a solution. They decided to go in the opposite direction and create Batman: The Brave and The Bold, a lighthearted, child-friendly cartoon that is more reminiscent of Adam West’s version of Batman than Christian Bale’s.

Batman: The Brave and The Bold debuts this Friday night, but the nice people over at The Cartoon Network were kind enough to send me the first episode in advance (I’m kind of a big deal). So, this week I’m bringing you a very special One Shot column where I am reviewing a show that hasn’t actually aired yet … 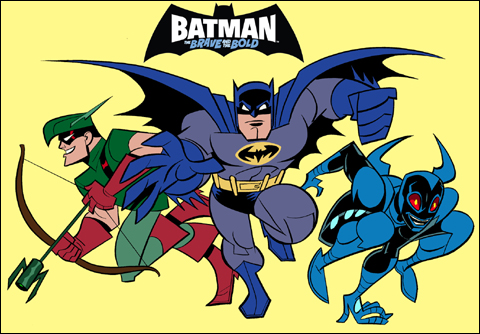 Batman: The Brave and The Bold – “The Rise of the Blue Beetle!”
(Cartoon Network – Premieres this Friday at 8 p.m.)

The Brave and The Bold is a popular DC Comic that features different superheroes teaming up to battle a common foe (i.e. Aquaman and Wonder Woman team up to make a merman tell the truth). This new animated series has stayed true to that original concept, but has made Batman the focal point of the show – meaning that Batman will appear in every episode, but he will get a different superhero to work with each week.

The opening of this Friday’s episode appears to be an homage to the live-action 1960s Batman TV series. The episode begins with Batman and the Green Arrow tied to a giant grandfather clock positioned above a pool of acid. Standing over top of them is the Clock King and his two henchman – Tick and Tock. The Clock King explains that when the clock strikes midnight, Batman and Green Arrow will be dropped into the acid and killed. Unfortunately, Clock King is on a tight schedule and can’t stay until midnight – so he leaves, assuming that his plan will go off without a hitch. Of course, Batman and Green Arrow waste no time escaping once he is gone.

The Batman/Green Arrow scene is just a brief vignette to open the show. The actual episode centers around the Blue Beetle – a Batman fanboy named Jaime Reyes who has become the Blue Beetle thanks to an alien suit he inadvertently discovered. Batman knows Jaime’s secret identity, even though his friends don’t. The Blue Beetle seems to be the show’s version of Robin – a teenaged superhero who works with Batman that young fans will hopefully relate to. Luckily, The Blue Beetle is much less annoying than Robin – so his presence in the show is actually tolerable.

Batman is hoping to test Jaime to see how he responds under pressure and to see if he will make a good superhero someday. So Batman and the Beetle team up to take out an asteroid headed for Earth, but they inadvertently stumble into a wormhole and end up on an alien planet (a wormhole undoubtedly created by the Large Hadron Collider). The inhabitants of the planet – a group of gelatinous beings that look a bit like Kirby from the old Nintendo games – are living in fear of an evil dictator named Kanjar Ro, who uses the Kirbys for fuel. The Kirbys have seen the Blue Beetle before (although Jaime is unfamiliar with them – meaning that someone else in the Blue Beetle suit was there before) and they think he has returned to save them. They also think that Batman is the Blue Beetle’s sidekick.

Batman decides to play along and act as the sidekick to see how Jaime handles himself. The power and adulation immediately go to Jaime’s head and he begins to believe that he doesn’t need Batman’s help to defeat Kanjar Ro. Since the episode hasn’t aired yet, I won’t give any more detail about the actual plot than that, but let me assure you that from there hijinks ensue.

Final Thoughts: Being a sucker for Batman and a big fan of The Cartoon Network, I assumed that I would like this show, but I ended up enjoying it even more than I thought I would. The animation on the show is very slick – it’s almost as if Batman: The Animated Series, the opening animated sequence on 1960s Batman series and The Venture Bros. all had a crazy, drunken three-way and Batman: The Brave and the Bold was the resulting love child.

Diedrich Bader (from The Drew Carey Show and Office Space) does an outstanding job as the voice of Batman. While I am normally skeptical any time anyone besides Kevin Conroy gets to voice Batman, I have to admit that Bader knocks it out of the park. The writers also give him a lot to work with – Batman toys around with the Blue Beetle a bit when the aliens think he is their savior, which suggests that Batman has a sly sense of humor (which they will hopefully reveal more of in future episodes).

The show is really great. It’s clearly aimed at kids, but has enough jokes to keep adults happy. It’s the kind of show that parents can sit and watch with their kids without rolling their eyes and dorky Batman fans like me can watch alone in their boxer shorts without feeling sad and pathetic afterward.

I’ll definitely be watching this show every week and I suggest that you give it a try as well. With any luck, it will become a huge hit and Diedrich Bader will make a million dollars from the show so that he can finally live out his dream of doing two chicks at the same time.