Whether you loved or hated this past Sunday’s Lost finale (for the record, I loved it), there is no denying that Damon Lindelof and Carlton Cuse gave us a definitive ending to the series. The evil smoke monster was defeated once and for all, Hurley and Ben took over as island protectors and the majority of the surviving cast members made it off the island to start the next chapter of their lives.

While we know that ultimately these characters were all eventually reunited in a flash sideways “purgatory” upon death, we don’t know what their lives post-Lost entailed. So while Chris Kirkman will be around later today to share his insights and thoughts on every other aspect of Lost’s final episode, I thought I would take the time this week to speculate on how the surviving castaways spent their remaining years on this earth before ending up in Christian Shepard’s non-denominational ghost church …

Kate Austen, the only member of the famed Oceanic Six to make it back to civilization, uses her Oceanic settlement and her celebrity status to open a chain of self-defense schools teaching women how to avoid being captured by armed assailants. She has a brief fling with Sawyer, which fizzles out after they both find themselves thinking of someone else during sex (oddly enough, they both think about Juliet). With Sawyer out of the picture and Aaron returned to Claire, Kate decides to follow in the footsteps of countless other celebrities and adopts a child from overseas – Ji Yeon. After a week of being with Ji Yeon, she finds herself pining for Aaron once again.

James “Sawyer” Ford and Miles Straume become celebrities in their own right after writing and starring in a series of buddy cop films. The franchise goes downhill when Brett Ratner signs on to direct the fourth movie. Fifteen years later, Sawyer and Miles have brief cameos in an awful reboot of the series that features Justin Bieber in the Sawyer role.

After being reunited with Aaron, Claire Littleton discovers that raising a real child is much more difficult than raising squirrel baby. Aaron’s constant questions about his “real” mom Kate and sweet Uncle Jack do little to help Claire’s ever-worsening mental state. Things continue to go downhill when Aaron starts elementary school and is embarrassed every day when she picks him up sporting unkempt hair and a tattered flannel shirt. Eventually, she snaps and ends up doing something like this.

Desmond Hume uses the ship left behind on Hydra Island to return to his beloved Penny and their son Charlie. His attempts to explain how he heroically saved the entire world by pulling the drain out of a giant golden shower are met with blank stares.

Richard Alpert discovers aging isn’t all it’s cracked up to be as he begins to lose the trademark good looks he’s become accustom to after all these years. His vanity causes him to undergo a series of plastic surgeries that leave his face so tight and unnatural that even Mickey Rourke and Sylvester Stallone pity him. Alpert dies tragically while under the knife of the only plastic surgeon left in Tijuana willing to operate on him.

Walt Lloyd lives a quiet life in New York with his grandmother. They both continue to wait in vain for someone to tell them what happened to Michael after he smuggled himself aboard the freighter. Walt occasionally impresses his friends at parties by appearing as a backward-talking taller ghost version of himself, although no one can explain why.

Hugo “Hurley” Reyes and Benjamin Linus get off to a rough start as island protectors as Ben quickly tires of Hurley’s constant Star Wars references and the incessant giggling that ensues every time he refers to Ben as his “number two.” Eventually, once they realize that they are the only two people left on the island besides Rose and Bernard, they begin to form an Odd Couple-like bond. Except for the fact that every time Hurley leaves a glass of water lying around, Ben drinks it in hopes of gaining his powers, things work out swimmingly.

Rose and Bernard Nadler spend their twilight years eating Dharma food and taking care of Vincent. They remain, until the very end, incredibly adorable together.

Vincent the dog gets a stern talking to from the Nadlers after attempting to play fetch with the bones of “Adam and Eve.”

And finally, “Chesty” Frank Lapidus retires from the airline business after realizing that one way or another every single aircraft he flies ends up on the island. He grows back his glorious facial hair and spends his days sipping beer on his front porch with his shirt unbuttoned all the way down to his navel. While his neighbors all think of him as loveable, happy-go-lucky Lapidus, deep down he secretly remains resentful that in spite of the fact that he managed to save the day by flying survivors off of the island on two separate occasions, none of the other castaways were even remotely concerned about his whereabouts when he seemingly didn’t make it off the exploding sub with them and no one bothered to invite him to their flash sideways purgatory, even though both Keamy, who tried to kill them all, and Charlotte, who was far less relevant and useful (and, well, chesty) than Frank, were. 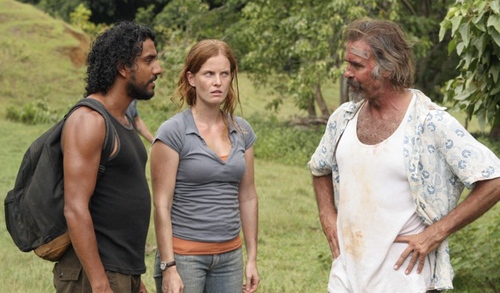