He’s creepy. He’s hateful. He induces the kind of rage that causes people to set puppies on fire. He causes the kind of ire that makes my eye twitch like Mr. DeMartino from Daria. And he’s apparently really fucking good at it.

For over four years now, we’ve been inundated with the flesh-colored bearded visage of this terrifying human being and his Frankenstein’s monster girlfriend. And for four years, we’ve laughed as they pretended they were famous and that people cared about them. Haha, we thought, they’re such fools. No one cares. No one.

Apparently, the joke’s been on us.

You know that famous line asshole’s use a lot, “There’s no such thing as bad publicity”? They embody this. And while we laugh at them and hate them and get annoyed by them, it’s worked. IT’S FUCKING WORKED.

This past week, TMZ has stood for “They Made a motherfucking sex tape ew icknast gross Ziggy” (I did not fully think this out). The site took a break from showing photographs of a plastic surgeon’s death scene (real classy, TMZ) and has displayed nothing but minute-by-minute updates of Spencer’s alleged sex tape blackmail. Which is obviously not real because a) it’s Spencer, b) I think we’re all pretty hip to the fact that no celebrity sex tape is remotely ever released without the knowledge or signature of both parties featured in said tape and c) because fucking duh.

The story: Spencer is blackmailing Heidi’s paralyzed face and immobile boobybags with footage of them bumping boobybags all night long. When interest was only minimal, Spencer upped the ante and paid off a nameless Playboy bunny to say there’s a lesbian tape, too. One he “found” while cleaning out their house. Meaning they’re filming that one right now. Hot silicon-on-silicon action.

I hate that these two are still happening. Even Paris Hilton is pretty much over. But these two still exist. People are still talking about them. No one has ever liked them or genuinely cared about them, but they exist. They matter in some weird fucked up way.

AND I AM WRITING ABOUT THEM. I hate writing about them. It fills me with a Snapped-esque rage that leaves a wake of blood and no memory of what I’ve done, but I keep doing it. I just keep playing into their hand. They are like Aryan evil super geniuses and I keep being bested by them and I hate it. I HATE IT.

The good news is that the sex tape is often the last desperate act of the famewhore. The bad news: the one after that is usually a baby. Please lord, do protect that poor fake child from being conceived by these two. There is no worse fate.

Here’s the thing: I keep waiting for this era of famewhore-dom to end. I’ve been waiting since 2002. And. It. Just. Won’t. At some point, I’ll have to just accept our plastic overlords as a part of lives. I’ll have to stop complaining and learn to deal.

But all dreams must die sometime.

I’d make some impassioned final paragraph about banding together to fight the stupid, but it’s inevitable, people. Yea, like the final survivors in a zombie film, we can try our hardest and fight the good fight, but we will be taken over, we will be consumed, we will be changed. 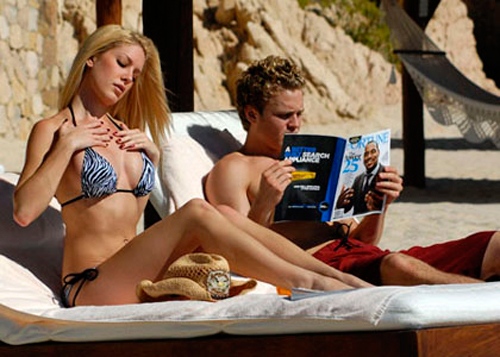