If you’ve been reading my stuff at Pajiba, you know I’ve been spending a lot of time talking about chick flicks lately. Yes, friends, my mind has been particularly estro-festy lately. I love good chick flicks, and hate the bad ones (a.k.a., most of them) to the point of physical violence against a plastic DVD. I feel that movies geared towards women should be celebrated, but only if they’re good. I’m not going to high-five Twilight just because people happen to like it. Wrong people, at that.

Weeks of lauding the good in chick flickery and celebrating the world of femme film has been leading to this one moment: the moment in which I discuss the most hateful character in the whole genre, perhaps even in film history.

I am talking, of course, about Julianne Potter, as portrayed by Julia Roberts, in the film My Best Friend’s Wedding.

In the film, Julia Roberts portrays a restaurant critic (aren’t they all?) who hasn’t spoken to her supposed best friend in some time. We’ll consider this Point #1 when the time comes. Wait for it.

Her best friend, the infinitely tappable Dermot Mulroney (#2). He tells her that he is about to marry 20-year-old Cameron Diaz (#3) and she immediately goes into relationship-murder mode. She spends her time as maid-of-honor (#4) engaging in lame sabotage involving karaoke (#5) and faux homo fiancéism (#6). Finally, she just macks on the guy (#7).

Remember. She is intended to be the hero of this tale …

#1 – Look, I have two wonderful best friends, both of whom live far away from me. I’ve never gone longer than a few weeks without talking to them. If I had, well, then they wouldn’t be my best friends anymore, would they? Erroneous titleage.

#2 – When you’re friends with Dermot Mulroney, you hit that so hard bones break. If you fail to do this, then that is your fault.

#4 – And really don’t become the chick’s maid-of-honor. Why don’t people ever just say no in movies? You can say no, you know. I mean, it’s a big responsibility and involves a great deal of money and time.

#5 – Ignoring the cruelty of attempting to humiliate a poor sad 20-year-old and the ignorance of assuming hearing her sing poorly will end their relationship, I’m most bothered by this scene’s responsibility for all the various film scenes of Cameron Diaz singing and/or dancing that have occurred in the last 13 years.

What bothers me most is that this character really swung the pendulum of romantic comedy female leads from neurotic and interesting in a positive way to shrill and beastly in the worst way. This film and this character really started the trend of annoying-as-endearing that seems so prevalent in the genre today. And there is nothing I hate more than the Type A Evil Bitch You’re Supposed to Root For.

I hate the fact that romantic comedy heroines are all awful terrible people, in theory struggling with the notion of work-vs.-relationship, which no one in real life actually struggles with all that much, and if they do, it’s usually an excuse for the real reason they can’t hold one down. I hate the fact that men in romantic comedies are either laid back and completely fine with everything in their life, or irritated by the irritating female lead, and we’re supposed to disagree and root for the two to get together. Ridiculous.

Stay tuned next time when I address other current and timely topics such as the Wings series finale and Monica Lewinsky’s taste in haberdashery. 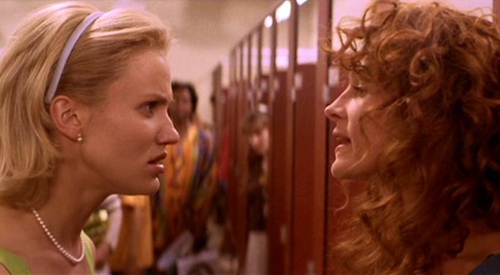