It’s a tradition in this country that we like to blow our holiday wads early so we can start thinking about the next one. If you’ve been in a store in the last four months, you know that it’s, um, “nearly” Christmas here in the middle of November. So with that kind of pacing in mind, I’m going to start being thankful a week early this year, so I can get all of my Thanksgiving hoo-hah out of the way now and get to worrying about not being able to get anyone for Christmas the way America’s corporations want me to.

This year, I’m thankful for the following things:

The Avatar Special Edition DVD. Because if there’s one thing a wooden, boring, hackneyed movie needs to be, it’s even longer.

Snuggie commercials. Now I have something to gauge my dorky white guy-ness against. Yes, I may be a dork, but I’m not so much of a dork that I’m wearing a Snuggie while juggling and spinning a hula hoop in my living room.

Having acid reflux. Because I feel cheated by a meal when I’m not burping it back into my mouth for hours afterward. Plus, the excitement of nearly puking all day long adds that extra kick of adrenaline to my daily routine.

The Office becoming unbearably awful. There’s another free 30 minutes in my week to … well, I’ve got nothing going on, but it’s still free time.

The Big Top Cupcake. For showing the most gluttonous country on Earth that you don’t have to be guilty about eating an entire cake at once if you just shape it like a muffin and call it a cupcake. I think Pizza Hut should start make a Fiat-sized calzone and call it a Deluxe Pizza Bite. It’s the same principle.

My apartment leasing office. Sure, they won’t get us the security doors we need so that our apartments won’t get broken into and robbed (which happened in my own building, two floors down, this week), but at least they’re understanding about rent. They let me pay late this month for only a $100 late fee because the power company just isn’t physically able to accept sixty-five bucks a single day later without collapsing into bankruptcy.

The upcoming ABC Family Original Movie The Dog That Saved Christmas, featuring the voices of lifeless dummies Mario Lopez and Paris Hilton. Because what else would the weekend’s ABC Family Harry Potter marathon have been interrupted with commercials for every six minutes? Something less irritating? Screw that; I say go for the gusto and shove the most annoying thing you possibly can into everyone’s faces eight times an hour. They could’ve put blinking lights and car alarm noises all over this thing and it still wouldn’t have been any more aggravating that it already is. It is the apotheosis of D-list celebutard annoyance. And somehow it drives me even crazier that this movie is the herald of ABC Family’s “Countdown to 25 Days of Christmas.” Yes, they need a countdown to their countdown to Christmas. Why don’t they just go even further with this thing and show Christmas movies for the last six months of every year?

The State of Illinois. Thanks to a massive deficit and constant teacher layoffs, it’s never been harder for me to find work. So now I have all day long to surf the web, play video games, watch movies and find other ways to fill my time while waiting for the sweet release of death. Sure, I can’t buy food, but maybe it’ll get me there quicker.

That Hallmark commercial where the little girl counts down to Christmas. Hallmark really does me a solid every year and reminds me that, as much as I sometimes think I’d love to have kids, I really don’t have the patience for it.

My slowly dying computer. The surprising bluescreen errors make attempting to do anything on my computer more exciting. Who needs the tired predictability of a computer in normal working order when the mere act of using Word can be sprinkled with the excitement of suddenly losing everything I’ve been working on?

Champion hot dog eaters. For reminding me that as health-endangeringly disgusting my eating habits can be, I still have a long, long way to fall.

My neighbors across the hall. I’d never know it was Thursday night without the pumping music and drunken idiots out on the balcony screaming the mating call of the idiot out into the indifferent night.

Commercials that rewrite the lyrics of Christmas carols to be about shopping. Because if you didn’t exist, the holiday season would be so much less irritating, and what kind of Christmas would that be?

Oh, and of course I’m thankful for my wife, my family, my pet rabbit, Nintendo Wii, Netflix instant streaming, having a home with (barely) working heat, the continued existence of Kristen Bell, the unrelenting awesomeness that is Castle, IDW’s collection of early Archie comic strips, my dedicated Positive Cynicism readers, and the fact that next year we’ll finally have a new Muppet movie. So, I’m a little well-rounded, right?

No? Well, Happy Thanksgiving to you, too. 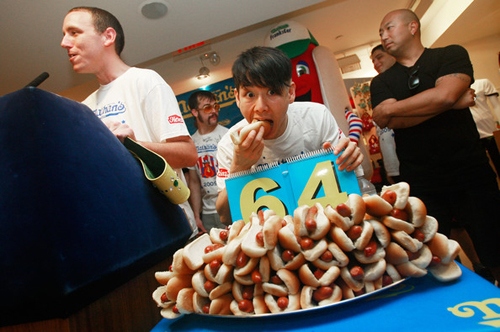