“The world sees a dog. He sees Wilfred.”

That’s the tagline for Wilfred, the new sitcom debuting on FX tonight at 10 pm.

As tonight’s premiere begins, we are introduced to Ryan (Elijah Wood), a depressed, unemployed lawyer who is hard at work on the third draft of his suicide note. After downing a smoothie laced with pills and settling in for his final night on Earth, Ryan’s plans are interrupted when his attractive neighbor Jenna (Fiona Gubelmann) asks if he would mind watching her dog Wilfred (Jason Gann). However, instead of seeing a dog, Ryan sees Wilfred as a man in a dog suit who talks to him. Hilarity ensues.

The show is based on an Australian sitcom of the same name created by Gann. It has shades of other shows and films as well, like the classic Jimmy Stewart film Harvey or more recent films like Donnie Darko and Fight Club. It also feels at times like a grown up version of Calvin and Hobbes. But while it has touches of these other things, the American version of Wilfred is wholly unique. It is at times sweet and poignant and sad and, most importantly, incredibly funny. It somehow manages to be a dark comedy with heart.

Elijah Wood and Jason Gann have incredible chemistry together. And Wood does such a great job in the opening moments of tonight’s episode quickly convincing you of just what a dark place Ryan is in that having Wilfred show up instantly becomes this welcome relief. Wilfred sees that Ryan is suffering and that he’s spent his whole life being “a good boy” and recognizes that he needs help breaking out of his shell and standing up for himself. At one point, Wilfred says to Ryan: “Aren’t you tired of doing what everyone else wants you to do? Maybe it’s time you quit playing ball with them and just played ball with me.”

Wilfred speaks in dog metaphors and tries to convince Ryan that he needs to be more of an alpha dog. It’s a fascinating relationship because the dynamic feels inverted – Ryan often feels like Wilfred’s pet. What’s strange and really fun is that as the story unfolds you quickly just accept that Wilfred talks and drinks and smokes pot and acts like a human, but then another person will come along and remind you that everyone else is still just seeing a normal dog. 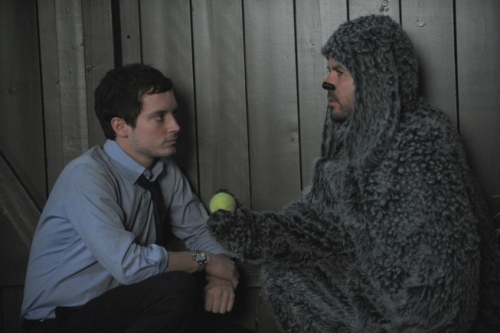 Many of the funniest moments in the series tend to come from the moments where Wilfred displays typical dog behavior. Seeing Gann chase a laser pointer light or circle around the couch three times before settling down in a spot is just inherently funny. And since he can talk, hearing him deal with a dog’s thought processes in a human way is also hilarious. In tonight’s episode, he fears that Jenna is gone forever when she is off at work because he hasn’t seen her in so long. And in next week’s episode, he goes on a crazy conspiracy theory rant about veterinarians when he is nervous about having to go in for an appointment. And, since dogs are colorblind, we discover in episode three that he literally sees the world in shades of gray.

But while the show could easily get by being a silly comedy where Ryan and Wilfred get into fun adventures together, it has a darker edge to it, which is what makes the show truly intriguing. You are never exactly sure where Wilfred’s loyalties lie. It’s hard to tell if he challenges Ryan and sabotages him at times in order to get Ryan to stand up for himself and take control of his life or if Wilfred is just out to get a laugh at Ryan’s expense. But either way, he forces Ryan out of his comfort zone each week on the show and teaches him to be more assertive and confident.

“Regardless of where it feels that the motivation is coming from, whether it’s a negative one or a positive one, the result tends to be a positive one for Ryan despite the fact that it may be cloaked in Wilfred’s self interest for instance or sabotage,” explained Wood. “The end result tends to be that Ryan does take something positive away from it, but I too love that ambiguity. You’re never quite sure where Wilfred stands and kind of what Wilfred really is to him, and that carries on throughout the season. It’s always sort of oscillating. There’s a slight bit of danger in that relationship and discomfort.”

It’s a really quirky and enjoyable show featuring two great performances by Wood and Gann. Having screened the first three episodes, I can confidently say that all three of them are, as Gann described the show, “ball-tearingly funny.” If you are looking for a smart, unique comedy, make sure to check out the premiere tonight.

[And, if you want to know more about the show, make sure to check out our interview with Jason Gann.] 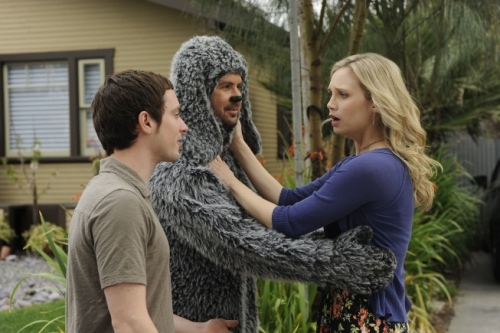 Written by Joel Murphy. If you enjoy his recaps, he also writes a weekly pop culture column called Murphy’s Law, which you can find here. You can contact Joel at murphyslaw@hobotrashcan.com.