I just don’t get this guy or his inexplicable popularity. He’s got that shitty magic – a combination of mere recognition and nostalgia (which, despite what the Internet blathers on about daily, are not actually the same thing), which makes people overlook that fact that a) he’s untalented, b) he’s not interesting, c) he never once made a movie or TV show that could be objectively considered good unless you were eight when you saw it and then never again since or maybe once took a tow-hook to the head or unless it involved Bruce Lee in some way, and even then, no, Chuck Norris’ movies suck. Also, d) he’s a right wing, homophobic, Huckabee-endorsing, other religion-hating birther, which is the absolute worst thing about him except for the fact that he has people on the Internet who think he is awesome despite the fact that he clearly and definitively is not.

But whatever. If people didn’t like stupid shit, half the Internet would shut down.

So, the latest sucky thing about Chuck Norris is this: he’s demanding that The Expendables 2 be trimmed down to a PG-13 rating, or else he refuses to appear in the picture.

I know, I know, it sounds like I’m making a joke, but it’s true: Chuck “The Total Gym Guy” Norris is demanding cuts in The Expendables 2 as if he’s anybody that could tell anyone in Hollywood to do anything. Except what’s weird about it is that producer Sylvester Stallone is agreeing to these demands, because apparently the guy trying to put together the ultimate action series actually seems to think that having Chuck Norris in a flick is something so commercially important it can’t be lost. Apparently he never saw Delta Force. Because that was all Lee Marvin.

And let’s not be mistaken here, The Expendables kind of blew. It was a neat half-joke concept, that you get all of those aging action stars in one place together and make this awesome, stupid action movie. In execution, it was more stupid than awesome. Like, a lot more. But hey, it made some money, and people got excited for a sequel, so more power to Stallone and everyone involved. Since Mickey Rourke decided he was a serious actor that week and declined to appear in the sequel, Stallone turned to Chuck Norris instead. And Chuck Norris demanded cuts.

Yes, because Chuck is a man of the people (unless you’re gay or an atheist, in which case he hates you and thinks you should either be killed or sent to a re-education camp) and insists on being family-friendly (um … now), he’s insisting the language be chopped down, which I really hope against hope is going to lead to a lot of badly-dubbed swears about fargin’ iceholes and mother-fathers. This is a rare case of a movie becoming its own TV-friendly edit before it’s even released in the theaters. Because Chuck Norris, the near-fascist who nigh-treasonously demands to see President Obama’s long form birth certificate because he doesn’t trust a black guy to lead the country, wants to make sure that children aren’t assaulted by the F-word when they head out for a night of blood-soaked, casually violent family entertainment.

That’s the thing that gets me the most. Chuck Norris is presumably fine with the violence; it’s the language he objects to. Sure, kill as many people onscreen as you want, but for chrissakes, don’t call someone a cocksucker as you depict them being ripped apart by bullets!

And like I said, The Expendables was okay, kind of. It didn’t make me want to see an Expendables 2. Chuck Norris being in it makes me want to actively avoid it. I just think it’s ludicrous that Stallone, riding the wave of a comeback after the first flick and Rocky Balboa and the surprisingly awesome Rambo, would actually cave on something that naïve. And I think it’s hypocritical that Mr. “Show Me the Birth Certificate Because I Am Apparently Important” has built his career on the exploitation of violence but rather cartoonishly draws the line at dirty words. If some ass hadn’t created the world’s worst Internet meme around the world’s most ridiculous jackass, no one would care. He’d be in his home working out obsessively and talking about his martial arts championships and about how he used to be in movies a long time ago, one of which involved teaming up with a dog to fight crime.

But hey, I get it, whatever. Encouraging hate crimes in your shitty column, good; saying “shitty,” bad. You got it, Mr. Family-Friendly. 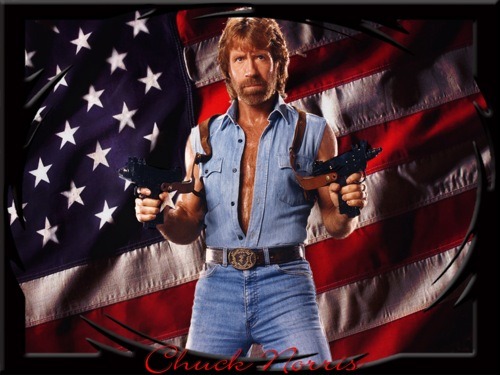