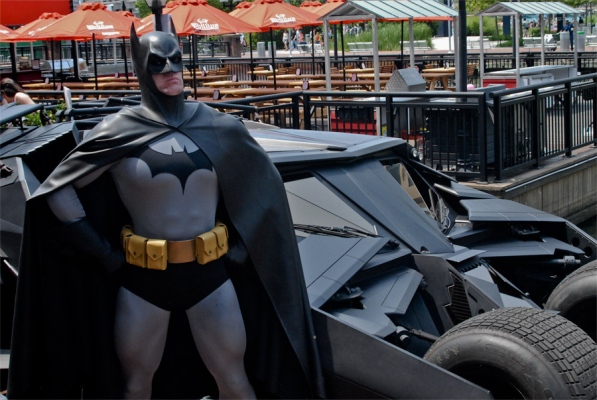 This Memorial Day, Batman could be seen patrolling the streets of Baltimore with his trusty Tumbler Batmobile and his Bat-pod motorcycle parked nearby.

No, this wasn’t some sort of Wire-style crackdown on crime in Charm City. This was part of a nationwide tour to promote the final installment of Christopher Nolan’s Batman trilogy, The Dark Knight Rises, which debuts in theaters July 20.

The Tumbler, first seen in Batman Begins, and the Bat-pod, first seen in The Dark Knight, were parked in Baltimore’s Inner Harbor for the afternoon, where fans could gather around and take photos. Batman was there too, sporting a classic gray comic book style costume instead of the more utilitarian all black outfit Christian Bale has been wearing in the films.

The “Tumbler Tour” began on May 12 in Arkansas and will continue into July. You can find all of the tour dates and more information on the tour at TumblerTour.com.