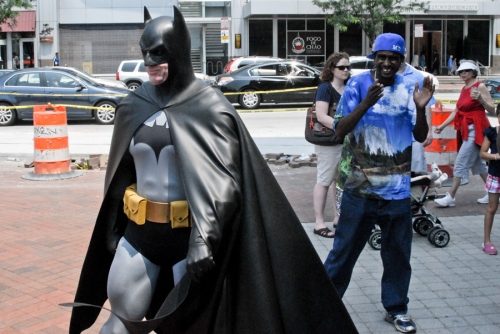 As you already saw in yesterday’s post, the Tumbler and the Bat-pod from the forthcoming Dark Knight Rises were in Baltimore’s Inner Harbor for Memorial Day.

As it happens, we have some DVDs to give away from TVFlashbacks.com, so we are borrowing a page from our buddy Homer McFanboy and doing our first ever Caption This contest, using this cutting room floor photo from yesterday’s Tumbler post.

To get things started, here’s our humble caption submission: “Batman squares off with his most easily defeated villain, The Clapper.”

If you think you can beat our caption, leave your own in the comment section below.

Update: Thanks to everyone who entered. Here are the winners …

Congratulations to ShagEaredVillain and Emma, who both have DVDs coming to them courtesy of TVFlashbacks.com (and to Theresa Gaddy, who wins nothing but our respect).