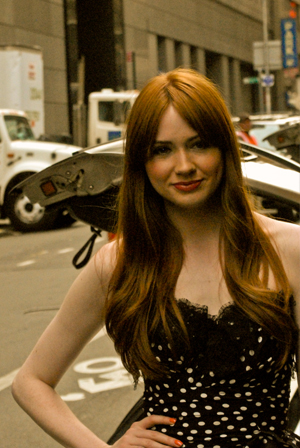 Amelia Pond is the girl who waited for years for her “imaginary” friend The Doctor to return. After finally being reunited with him and going on a series of wild adventures and squaring off against Weeping Angels, Daleks and The Silence, it’s time for Amy to say goodbye and to return to her quiet life with her husband, Rory.

There are just five episodes left with The Ponds. We caught up with Karen Gillan, who plays Amy Pond on Doctor Who, at BBC America’s offices before the premiere of “Asylum of the Daleks” at Ziegfeld Theater in New York City to talk about the many on-screen deaths of Rory, her love of Inspector Spacetime and the real life River Song.

The Ponds are leaving the show this year. Is there going to be room for a possible return? With the Pond Life prequel online, is there a chance for a spin off?

That was actually really fun. Because it’s always really interesting. You never get to see the snippets in between their adventures with The Doctor and that’s exactly what Pond Life is all about. And then in episode four of the five episodes, that’s what the whole episode is about. It’s about these two people trying to deal with a domestic life with this time traveler popping in and out of their lives whisking them off into crazy adventures. So it’s really cool.

Would you be open to returning to the show then?

Actually, I’ve always said that when I go, I want that to be for good because I want the final scene to have the same impact maybe 10 years on. I want people to be able to revisit it and still have the same emotion. That’s kind of the most important thing to me. So for that reason, I think I’m going to rule out any return.

You’re getting very good at lying.

I’m learning from the best.

What challenged you in these last few episodes that you had to film?

These are the biggest episodes that we’ve ever shot. There’s five and they’re movie-scale epic episodes and they’ve just been really amazing. Shooting in New York was kind of amazing. Just to contain the excitement of being in Central Park was a challenge. And then, all of these people turned up. Hundreds and hundreds of people, which we didn’t expect. So we didn’t have any sort of security or anything because we didn’t think that was going to happen. It was mad.

Then they were like shouting and being really nice. What was really nice was that everyone respected the shooting, so they were really quiet when we were shooting, then it would cut and they’d be like, “Sign my TARDIS.”

You’ve said before that your mom is a huge fan of the show. What are you excited for fans like her to see this season?

I’m trying to think of this from the point of view of my mother. What’s going to really excite her?

In the first episode, we’ve got more Daleks than you’ve ever seen. It’s really, really epic. And we see the Daleks in a whole new light. I’ve personally never found the Daleks that scary. I’ve loved them because they are so iconic and so typical of Doctor Who, but I’ve never been properly frightened of them. In this episode, they are really, really frightening. So that’s really cool.

Then we’ve got “Dinosaurs on a Spaceship,” which is just brilliant and so wrong. We’ve never had dinosaurs before, so that’s really cool. Then we’ve got a western, which we shot in Spain and then the final episode is in New York and we’ve got the Weeping Angels.

How many times can you kill Rory in these last five episodes?

It’s funny for me though because each time I have to invent a new death reaction. “What am I going to do this time?”

How are the negotiations going for getting you on Community?

I don’t know. I just literally sat there on camera and said, “I love it so much.” I don’t know what’s going on with that. Probably nothing. I do really like Inspector Spacetime.

Probably fairly similar actually. In the final scene I had to shoot, it’s not even acting, it’s just real. It was honestly one of the most powerful feelings, so I just kind of related it to how I genuinely felt about going in the show. It was a strong feeling.

How far along in the shooting did you have to do that shot?

It was fairly near the end. Actually, the very last thing we shot was a really insignificant one of us just going into the TARDIS. But then it became so significant because we were walking into the TARDIS for the last time and it was the three of us together. And the episode is called “The Power of Three,” it was so cool.

Then Matt closed the door and we were just in complete darkness. We all just had this massive hug in the dark. I cried and milked it for all it was worth. It was amazing.

How will you leaving affect River Song’s storyline?

That’s a really good question that I can’t answer because I don’t know.

How would you like to see it affect her?

I’d like to see her miss her mother a little bit. That might be nice. [Laughs.] I don’t know. I hope she just carries on being the same old River Song we know and love because she is just an amazing character.

Do you have a favorite moment from the show?

Oh my god, so many. If I had to choose one? I don’t know. My favorite episode to shoot was “The Eleventh Hour,” the first one just because I think there’s a particular magic to that episode and we were introducing the characters and establishing their relationship for the first time. It was all so exciting.

Actually my favorite scene doesn’t involve me at all. It’s the fish custard scene with my little cousin [Caitlin Blackwood] and Matt [Smith]. That’s my favorite scene out of all of the time I’ve been on Doctor Who.

As the series has gone on, Amy Pond has become increasingly popular. What do you think sets her apart from other companions?

That’s a really difficult one to answer. I hope that she’s quite a relatable, flawed character, so that people can relate to that sense of abandonment and someone who is really strong, but is clearly really vulnerable underneath it all. That’s what I wanted to portray anyway. I don’t know if people connected to that or not.

Fans on the Internet are really passionate, but at times can be a bit weird. What’s the weirdest thing you’ve seen on the Internet from fans about you or your character?

Actually, it wasn’t on the Internet and it wasn’t about me, but I was at a convention and this guy came up and he was dressed as a woman. He was like, “Hello, I’m River Song.”

I was like, “What do you mean? Your name is actually River Song?”

I was like, “No. No, no, no. You’re just saying that because you’re at a Doctor Who convention.”

He pulled out ID and his name was actually River Song. He had it changed by depot.

And then, after River Song, there was a guy in Australia who came up with a complete Doctor Who house. He had a TARDIS elevator. He had big gates with a Doctor Who sign on them. This must have cost some money. It was quite impressive.

You said the final scene was emotion for you, how do you think the audience will react?

I watched it for the first time and cried my eyes out. But obviously, I’m really invested in it. But I hope that people get the sense of bravery that everyone has to go through in the episode and from that feel slightly emotional.

[Editor’s Note – We were one of 10 people in a small roundtable discussion with Karen Gillan. The questions above are a combination of those asked by HoboTrashcan and the other media members.]

Top photo and interview by Joel Murphy. Second photo taken by Gary He for BBC America. “Asylum of the Daleks” airs this Saturday at 9 p.m. on BBC America. Check back tomorrow for an interview with executive producer Caroline Skinner.