No man is an island. Not even Santa Claus.

While jolly ol’ St. Nick is the one who gets the headlines (and the free milk and cookies), he is relying on a vast group of helpers to ensure that things run smoothly on Christmas day. And I don’t just mean the elves and reindeer that get to costar in all of the Christmas specials. Santa also has a variety of international sidekicks who help him deliver presents around the globe.

Last year, I talked about the Alps’ Krampus, a “long-tongued, horned demonic creature who carries bad kiddies back to his lair, where he eats them” and the Netherlands and Belgium’s Zwarte Piet, “who hauls naughty children off to Spain.” But those two are just the tip of the North Pole iceberg.

For instance, there’s Le Père Fouettard, who travels around Eastern France on St. Nicholas’ Day (which is actually tomorrow), not just handing out coal, but actually flogging all of the naughty girls and boys. Le Père Fouettard – which is French for “The Whipping Father” – was an inn keeper (or, in some versions, a butcher) who murdered three rich kids and stole their money. In some versions of the story, the Whipping Father actually cut them up and stewed them. St. Nick found out and resurrected the children (which, apparently, he can do), Le Père Fouettard repented and, for some inexplicable reason, St. Nicholas entrusted him with the task of beating naughty children. (I guess Hannibal Lecter turned down the job.)

If that backstory isn’t terrifying enough, Le Père Fouettard is described as a man with a dark face in dark robes sporting a long beard and crazy disheveled hair. The Whipping Father’s face is darkened, either from being burned in effigy or from the coal of the chimneys he climbs down. His arsenal includes a whip, a large stick and various switches. He also has a wicker basket on his back that he can use to trap children.

(Seriously, instead of remaking The Evil Dead, why isn’t Hollywood making a film about a group of American teenagers traveling to France, engaging in debauchery and incurring the wrath of Le Père Fouettard?)

If the Whipping Father is too intense for you, there’s Belsnickel, from south-western Germany, who serves mostly as a warning to children. Belsnickel – whose name is a combination of Nicholas and the German word for “wallop” – shows up a week or two before Christmas wearing tattered fur clothes and a mask with a Gene Simmons tongue carrying a switch and threatening kids. He doesn’t actually beat the children, since I suppose the mere sight of a crazy man with a scary mask and a weapon in his hand is enough to get kids in line. And, interestingly enough, this tradition has actually made it’s way to America, where Pennsylvania Dutch parents still use Belsnickel to keep their kids behaving.

Somewhere in between these two sidekicks is Knecht Ruprecht (a.k.ak “Farmhouse Rupert”). As part of German folklore, Farmhouse Rupert is described as sporting a long beard, wearing either fur or straw and literally arriving, as the saying goes, with bells on. Even though he’s a simple farmhand, he can at times be seen riding a white horse and surrounded by an entourage of fairies and crossing dressing men in blackface.

Like Le Père Fouettard, Knecht Ruprecht arrives into town on December 6, St. Nicholas Day. Rupert asks the children a simple question: “Can you pray?” If the kid answers yes, he or she is rewarded with apples, nuts and gingerbread. However, if the child answers no, he or she is beaten with a bag full of ashes. Presumably, this teaches children the importance of prayer (with the most common prayer they adopt being: “God, please make this crazy man stop beating me with a bag of ashes”).

Sometimes, Rupert would demand that the children perform for him – either singing or dancing or doing other tricks – to prove they were good kids. And, if you thought Simon Cowell was a tough judge, Rupert would beat any kids who performed badly. If you were really bad (either in your singing or your behavior), Knecht Ruprecht would put you in a sack and take you to his home in the Black Forest to either be eaten or thrown in a river.

This Christmas, make sure to tell your kids about Santa’s sidekicks. It’s not fair that the jolly ol’ elf gets all of the headlines while his hardworking enforcers get thrown by the wayside. Give these heavies the recognition they deserve. And, most importantly, if your kids get out of line, let them know that Santa Claus is coming to town … and this year, he’s bringing backup. 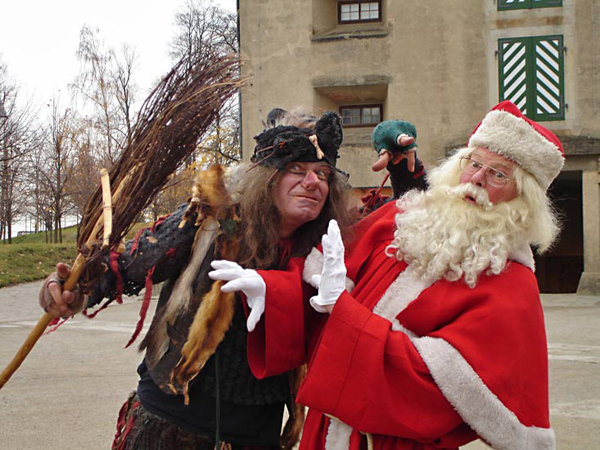