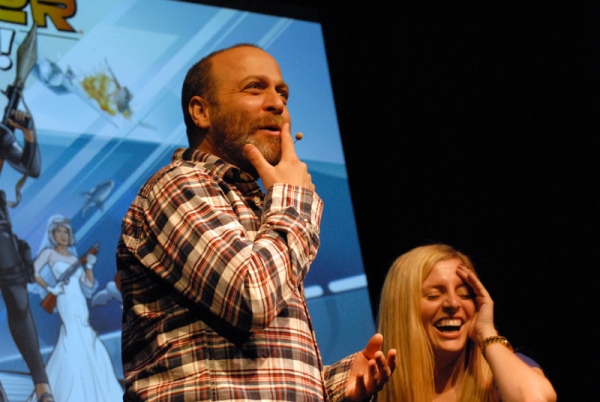 In a Q&A with press before the start of the Archer Live! event in New York City, H. Jon Benjamin was asked what the audience reaction has been like during the tour. Benjamin flashed a smile and said, “They’ve been very forgiving.”

The show at Irving Plaza in New York this past Saturday was the final stop in a four-city tour to promote season four of the beloved FX show Archer. Benjamin, who does the voice of the titular character Sterling Archer, was joined on stage by Aisha Tyler (Lana Kane), Chris Parnell (Cyril Figgis), Jessica Walter (Mallory Archer), Amber Nash (Pam Poovey), Lucky Yates (Dr. Algernop Krieger) and executive producer Matt Thompson. The cast took questions from the audience, reenacted scenes from the show and aired several video packages.

The whole event was delightfully low tech. When reenacting the climactic scene from the episode “Skytanic,” a cardboard box with “BOMB” written on it in Sharpie was used as the bomb. To reenact the car chase scene from “Drift Problems,” the cast sat in chairs while Nash gripped a plastic steering wheel and Tyler, Parnell and Yates (who was filling in for George Takei) all pretended to fire cheap plastic guns. Throughout the show, the cast members shot t-shirts into the crowd from a t-shirt gun, but due to a shipping mix up, their official Archer shirts hadn’t arrived yet. They were instead firing plain white t-shirts into the crowd, which the cast members offered to sign after the show as a consolation.

Archer Live! featured a heavy dose of audience participation. To start things off, Yates hosted a costume contest, which he decided for purely selfish reasons to have come down to the two guys dressed as Krieger. Later in the show, one fan got to come on stage to reenact the “Skytanic” scene with Tyler while Parnell fed him his lines and coached him along.

By far, the best fan participation moment came early in the show when the cast was introduced. When Benjamin’s name was called, instead of him taking the stage, a stand-in who closely resembled Sterling Archer came out instead. While Benjamin stood just off-stage talking, the stand-in pantomimed the dialogue. It was supposed to be a quick throwaway moment where the classically handsome stand-in picked a girl out of the audience and brought her on stage to kiss him, only to have the shorter, balder, less-chiseled Benjamin come out at the last minute to switch places with him. However, things went awry when the girl from the audience, who was visibly nervous and embarrassed to be there, didn’t want to kiss Benjamin. He couldn’t let it go and it quickly became a hilarious running joke throughout the rest of the show. 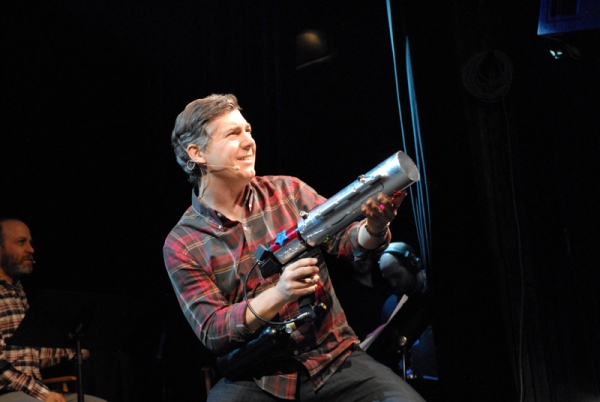 The cast hinted at a few things in store for the forthcoming season. Walter revealed that her real-life husband Ron Leibman will be playing Mallory Acher’s new husband on the show, Ron Cadillac. The cast also announced that Timothy Olyphant will be guest starring in an episode as a former ISIS employee and friend of Archer’s. Anthoy Bordain will be appearing in an episode as a celebrity chef. One episode, entitled “Papal Chase,” will center around Woodhouse’s uncanny resemblance to the Pope.

There is a Bob’s Burgers homage in the season premiere and the two-part finale will take place in a “sea lab” that, Thompson was quick to clarify, for legal reasons bears a striking resemblance to, but is not officially, the one from Adam Reed’s previous show Sealab 2021. (When asked about the Bob’s Burgers crossover during the press Q&A, Benjamin said, “It was really emotional” before pretending to tear up and walking off-stage to “compose himself.”)

Walter also talked quite a bit about her other popular television show, Arrested Development. She snuck in a plug for the new season of the show, which will be airing exclusively on Netflix. Walter also said her costar Michael Cera is a big Archer fan who has expressed an interest in appearing on the show. (Tyler followed this up by expressing an interest in having Jason Bateman on her.) A fan asked Walter which of the two shows people on the street quote to her more often. She gave the slight edge to Arrested Development and revealed that her favorite quote from that show is, “I want to cry so bad, but I don’t think I can spare the moisture.” Thompson said that both he and Reed consider Arrested Development to be the best TV show in the last 10 years. When the discussion of Walter’s other show got to be a bit too much for him, Benjamin jokingly shouted at Walter: “Save it for Arrested Development Live!”

The entire evening had a very playful and funny vibe to it. All of the cast members seemed genuinely happy to be there interacting with fans and talking about the show. And the audience was definitely into it, cheering and laughing loudly throughout. Everyone went home happy … except H. Jon Benjamin, who is still waiting on that kiss.

Photos and article by Joel Murphy. The new season of Archer debuts Thursday night at 10 pm on FX.