Game of Thrones is not likely to be at the forefront of your minds right now. There haven’t been new episodes in a while and other television has shocked the shit out of your lives lately. Switch your brain gears over, we’re gonna talk about it. Brewery Ommegang and HBO aren’t letting you forget, just because it’s the off-season.

Earlier this year, the brewery released the first in a series of Game of Thrones-themed beers. It was the Iron Throne Blonde Ale and it was just in time for the series to start. I definitely made some Lord Varys No-Bean Chili and Jon Snow Balls, cracked open a bottle of Iron Throne and enjoyed the season three premiere. I was jazzed to have craft beer paired with some of the best television in existence.

The next in the series is the Take the Black Stout. Perfect name. A nice, black ale to pair with hearty, simple and rustic foods to keep you warm, because don’t you dare doubt for a second that winter is coming. My only qualm is the timing. It’s so long before the next season of Game of Thrones and I want to drink all of my bottles noooowww. So I am.

Let’s break it down, shall we? First I should start by saying that stouts are one of my favorites. I’m pretty good at being unbiased, but it’s fair to mention it.

Appearance. This beer is as black as the wall is tall. It’s the darkest beer I’ve had; you can’t see through the glass it all. Just opaque, black and perfect. The head is INTENSE. I thought I’d have to pour a little vigorously to get a good head, but that was a mistake. It’s super thick and foamy and has a great caramel color.

Smell. There isn’t much to the nose. It’s very light with a slightly fruity aroma.

Flavor. The ABV on this bad boy is only seven percent. For a stout, this can tend to have a flat-feeling flavor profile. Luckily, it’s not the case. It has a lot of flavor; bitter notes of chocolate, a little coffee and some lighter fruity/berry flavors on the back end. Though, I don’t get a lot of the star anise or licorice root that it was brewed with. The aftertaste lingers a little longer than I prefer, but it isn’t a bother. Overall, it’s nicely balanced. Nothing super-prominent or outstanding, but a great drinking stout. 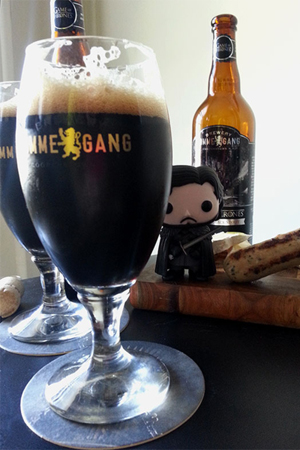 Mouthfeel. I felt the beer to be a little thin. Again, I think this is because of the low ABV. It is perfectly carbonated though and is quite smooth.

Pairing. With any rich stout, pairing with chocolates, sweet and decadent desserts, potent cheeses, thick stews and roasted meats is perfect. This particular beer, I paired with some roasted garlic chicken sausages, brie with honey and chunks of dark chocolate. I wanted to keep things simple and seemingly out of the kitchen at Castle Black.

Overall. I’d definitely buy it again. Especially if I could get it for its retail price and not the price-gouging sticker cost of center city Philly. It’s a 750 mL bottle, and provides a lot of bang for it’s buck. I think the mildness of the flavors works in a product that appeals to a wider audience due to it’s television tie in. It’s super drinkable and pairs well with a lot of my favorite foods. I’d love to snuggle up, marathon the show and drink a whole bottle of it myself.

Since there was such a rush on the bottles of the first in the series, the Iron Throne Blonde Ale, Brewery Ommegang has decided to increase production on the Take the Black Stout, so hopefully you guys can get your hands on some and try it yourself. I think it’s more successful than it’s predecessor and perfect for your next Game of Thrones-themed event. I’m even thinking of going as Daenerys Targaryen for Halloween, maybe I’ll have to save some for then.

As the weather gets colder, grab a pelt of fur, a goblet of stout and Ghost and curl up by the fire. You can’t go wrong with that.