Every year, like so many people, my wife and I watch the old Rankin-Bass Rudolph the Red Nosed Reindeer. And, somehow, every alternate year, we sit and talk about the weird, outdated attitudes it presents and come up with similar questions. It’s a new tradition! Here are some we came up with this year, not all of them presented seriously.

One: What are the darker implications of Santa Claus’ deerstalker outfit?

Did you ever notice that Santa wears a deer hunter’s clothes when he comes to visit the newborn Rudolph? That seems a bit insensitive. Maybe Santa stalks the North Pole night, checking out the newborn fawns and deciding which will be hardy enough to survive, and taking away those that don’t. Or maybe he’s culling the members of the herd who didn’t calve this year. Produce no offspring? Well, it’s not like it’s easy to get meat up here in the first place, and who ever heard of a skinny Santa?

Two: Why is Santa such an insensitive, close-minded prick?

When he sees Rudolph’s nose/genetic mutation, he actually tells Donner that he should be ashamed of himself for having a child with a birth defect. That seems a little insensitive, especially since it’s not that long after thalidomide and polio. What if Rudolph had polio, Santa, you jerk? He doesn’t seem to give a shit about Rudolph at all until Rudolph proves useful in an unforeseen situation. (How a blizzard is an unforeseen situation in the North Pole is a whole other thing.)

(Re: question one, I think Santa would have culled Rudolph for sure if it weren’t for the fact that Donner was on the sleigh team. You know how football players get a lot of breaks whenever they want to fight dogs or rape somebody because they’re really good at running and catching? Otherwise, Rudolph with his nose so bright would be dying of exposure that night.)

What makes this especially galling, though, is that Santa is a skinny guy. He doesn’t want to get fat for a night every year, and his wife badgers him about it, urging him to conform to traditional expectations of Santa Claus. Don’t you think that frustration with society’s image-based judgment would make him just a bit more sympathetic to a reindeer with a mutation? Jeez, Santa, if you’re this much of a conformist asshole, who judges people by their looks or their personal usefulness to you rather than their character, I’m not sure I even want presents from you.

Three: Who built all of those Misfit Toys in the first place, and what’s even wrong with them?

A dolly who cries? They already have those. A spotted elephant? Adorable. A squirt gun that shoots jam? I know about eight people who tried to do that as kids, anyway. (Also, it’s not like it’s genetic; just fill it with water, jeez.) A cowboy riding an ostrich is amazing. (Didn’t you ever play Joust as a kid? I know it wasn’t around in ’65, I’m just saying, you know it’s an awesome concept.) A Charlie in the Box? Just change your name, idiot! Of all of the people with made up problems on the Island of Misfit Toys, yours may be the least problem-y one.

But who built these? The North Pole’s toy operation of lookalike drones seems pretty tight. Did one of them go on an angel dust-fueled rampage and create these weird toys, and after he was put down, did they just shove the toys out onto Narnia’s front door and wipe their hands of it? Santa would have been in charge of that probably, right? Why doesn’t he find homes for those toys earlier? Why doesn’t he do it until Rudolph more or less shames him into it? I think it shows a real lack of faith in a kid’s ability to be accepting of toys with handicaps.

Also, does anyone else feel a little sick when that elf is throwing the Misfit Toys off the sleigh at the end? I mean, he didn’t even give that owl an umbrella to pad his landing, even though the owl explicitly stated he couldn’t fly. It’s like that pile of dead babies from 300 down there.

(Also: when do these particular toys get imbued with life? I want to see the story of this Frankenstein elf who decided not only should these toys be misfits, but they should have a consciousness to experience their misery with.)

Four: Why doesn’t Rudolph realize how good he actually has it?

I mean, I know we’re supposed to feel bad for Rudolph for being outcast because of his shiny nose, but do you think the jerkass Santa we get in this thing has ever even once thought about whether a female reindeer would be fit to pull the sleigh? Hell, apparently his reindeer don’t even get to grow antlers, even though both sexes of reindeer do. Clarice has that bow, though. I wonder at what point females lose their vestigial bows? (Since there’s no biological way she could have put that on, I assume does are born with them.)

You can see it in the dialogue. When Rudolph’s unnamed mother (she doesn’t even get that dignity, she’s just identified by her mate’s name as “Mrs. Donner”) wants to go searching for him, Donner says “No. This is man’s work.” And when Yukon Cornelius and the Bumble go over the cliff, everyone agrees not to look for him because it’s more important to get the women back to Christmas Town. Yeesh.

This special, man. It’s an interesting look at societal attitudes that need to crumble and die and stop trying to legislate. I mean, yeah, it’s cute and fun, but there’s just so much to unpack that I’ve run out of room. I didn’t even have space to go into the ethical implications of altering the Bumble’s fundamental nature by taking out his teeth to tame him, and what that probably says about race.

Merry Christmas and check your privilege. 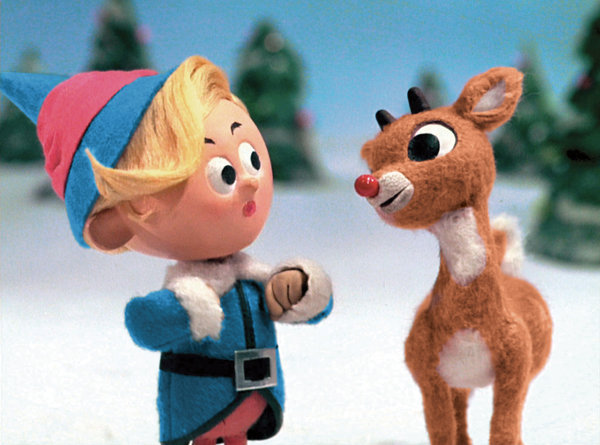