It’s becoming just a little too hip online to start railing against how “remote” we’ve become from one another because we’re too busy looking at our screens all day. Keep in mind that people are getting onto the screens to say so, and try not to hurt yourself rolling your eyes.

Late last year, Louis CK went on a rant against smartphones. It was just yet another variation on the conservative “Are we engaging with each other enough?” plays to anxiety that humanity’s been dealing with since the invention of printing, but way too many people I know found it brilliant because of course they did: it was a direct appeal to our fears that people are somehow becoming sociopaths because personal technology jumped another level. Oh, we’ve made it so much easier to bully each other and ignore each other and be rude. Check your history: the same arguments were made at times about the Internet, video games, television, radio and newspapers.

Let me ask you a question: after you heard Louis CK’s rant, did you step away from your screens for even an hour? Or did you “like” it, forward it and then go right back to playing Candy Crush Saga? Or checking your emails? Or tweeting something about whatever exciting sandwich you ate today? And if you did, do you often take the advice of rich people who don’t have the same daily grind that you do? Sure, it’s nice to pull over and listen to a Bruce Springsteen song and have an emotional moment, especially when you don’t have a “9 to 5” you have to get to. But a lot of other people want to check the news and need to stay in touch with work.

Look, not everyone with a smartphone is constantly on Facebook or playing games or cyberbullying. (Louis CK is right, the Internet has made it much easier to be a bully, but his supposition that bullies will stop bullying when they see they’re hurting somebody is total bullshit; congratulations on not actually knowing other kids while you were growing up, I guess.) Some people are reading the news, researching topics or even just reaching out. The invention of social networks is the best thing that ever happened to people with crippling social anxieties. That’s a positive. That’s a great positive. And I’m starting to despise it when I see someone shitting all over that in favor of pretending that we’d all be so conversational with one another without them.

Those of you my age and older, think about it: did you ever just stand around and talk to people before we had all of these screens? Or did you bring a book to the DMV? Or read the newspaper on the train? Or do crossword puzzles while you were out at lunch? There’s this myth we have now that all anyone did was write letters and stand around in circles talking about something in total harmony that we’ve somehow lost because we can go to WikiHow and get a recipe. It’s ridiculous. And it’s fear.

It’s nothing but fear to suppose that things were somehow better before some technological advance. Things weren’t better; it was just easier to ignore what was around you. Yes, people need to stop being so casually rude and checking their texts while they’re having a conversation with you. But I’m willing to take that if it makes communication around the world faster and easier. I’m arguing here that the prevalence of screens in our lives has made us more engaged and more educated about people who aren’t ourselves. I think it’s made it easier to know ourselves and examine our feelings and seriously question what’s going on in the world.

But, sure, let’s say you think life is better without screens and smartphones. In Louis CK’s story, he talks about listening to the radio and how it felt more “real.” Is that any less of a way to fill the silence? Is it better because it’s an older type of distraction than chatting with someone via text? What makes one more isolating and the other more a more joyous connection? When you’re chatting with someone, at least you’re engaging with another person and not a forty year-old recording.

I’ve said it before and I’ll say it again: there is no “right” way to engage and experience. This is my constant answer to people who tell me that ebooks “aren’t real books,” as though reading now only counts when you pick up a physical book. Forget that most of the people who say that are bloggers writing online. Forget that there are people who can’t afford to buy a lot of books who, thanks to ebooks, have more access to literature than ever before. Even forget that having ebooks makes it possible to self-publish and share your story by going straight to customers. What about the resources? Imagine, in the future, when everyone’s smartphones are far more powerful than the ones we have now, someone explaining how people used to pulp entire tree nurseries just to whittle down a space-taking book that only held a single megabyte of information … especially if that information is the latest Bill O’Reilly screed.

“Turn off your screens, talk to each other.” Fuck you. You talk. You write letters. You pretend it’s still 1992 and the economy is great and you don’t have to read something someone wrote on their Facebook wall that makes you seriously reconsider the way you treat women. I’m an agoraphobe who can’t afford to buy books and I’m connecting with people, great literature and the world. I’m listening. I’m learning.

I’m secure in the notion that not bothering strangers on the street with my problems doesn’t make me a sociopath. 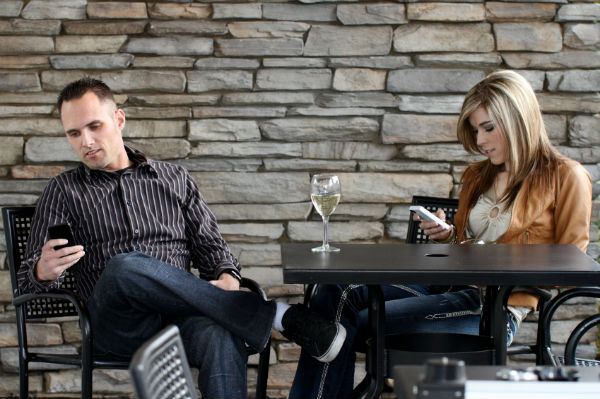