Every time I’m really into a show and the season ends I feel like I’m going to DIE before the next one starts. It’s always so fucking long between seasons and seasons are just far too short. I know that’s not necessarily fair. Especially when it comes to Game of Thrones. Each episode is like a half-movie, after all. But logic and love don’t always go together and since I love it so much, I WANT IT NOW.

So needless to say, I’m pretty excited for season four of Game of Thrones. I know I’m not the only one. It’s such a fucking hit that it’s converting some of the least nerdy people in the world into fantasy fans. So all of you, nerds and non-nerds alike, please join me in welcoming in Game of Thrones in my two-part tribute series of themed-recipes.

(I want to mention that I started writing for HoboTrashcan because the boss man liked my Game of Thrones themed recipes so much!)

This week I’m giving you A Feast of Ice. It’s got all you need. A thick and hearty steak and peppered bacon pie called Bake the Black that is sure to be served to the men of the night’s watch. Cooked in a thick, meaty gravy with some delicious Scotch ale and baked into a flaky pie crust, it’ll be sure to keep you warm when you’re patrolling the wall.

If you need to wash it down with something cold and evil, whip up a White Walker. A White Russian-style cocktail with Johnny Walker Black is sure to get into your bones.

For dessert, share some of Ghost’s food, some Dire Wolf Puppy Chow. A little like the classic puppy chow recipe, but with nuts and other goodies that you may find in Westeros. Don’t worry, there’s no chocolate in it, I wouldn’t want your dog getting sick when there are throats to be torn out.

Get excited guys, it’s almost here. Check in next week when I give you A Feast of Fire.

Pour ingredients into a shaker full of ice. Shake until chilled. Serve as cold as the undead.

* Something to consider: this recipe is a take on a White Russian, which I happen to find overly thick. If you agree, you can thin the drink by using 1 part cream and 1 part milk in place of the two parts cream.

(Recipe adapted from Inn at the Crossroads)

Cook your peppered bacon until crispy. (I prefer the stovetop method so I have more control over it.) Once cooked through, remove to a plate, lined with paper towels, and set aside until ready to use.

In a Dutch Oven or large skillet, over medium-high heat, drizzle olive oil and add beef and diced onion. Sprinkle with salt and pepper while its cooking. Stir occasionally.

Once the pink is mostly gone, sprinkle with the flour. Stir until everything is coated/combined. Add in ale and broth. Stir.

Simmer for 45 minutes to an hour, or until the gravy has thickened. Stir in your cooked bacon. Allow to cool while you prepare the pie dough.

Combine the flour and salt, then rub or cut in the butter until it resembles a coarse breadcrumb mixture. Gradually add enough water to pull the whole together. Place in the fridge to chill for at least 30 minutes.

Divide the pastry dough in two, and roll out to two rounds, about 1/8″ thick. Place one layer of dough in a pie pan, then fill with the cooled meat mixture. Wet the edges, then place the second layer of dough over top. Trim excess dough off the sides, then fold under and seal. Brush with egg wash and bake at 400F for around 40 minutes, or until the top is a golden brown. Allow to cool for at least 10 minutes before slicing.

In a large bowl, combine nuts, crackers and pretzel balls. Set aside.

In the meantime, put two cups of powdered sugar in each freezer bag.

Pour peanut butter sauce over nut mixture and stir until everything is coated. Scoop half into one freezer bag and half into the other. Zip both and SHAKE.

Perfect for keeping in your pack when traveling. Your pups might get hungry. 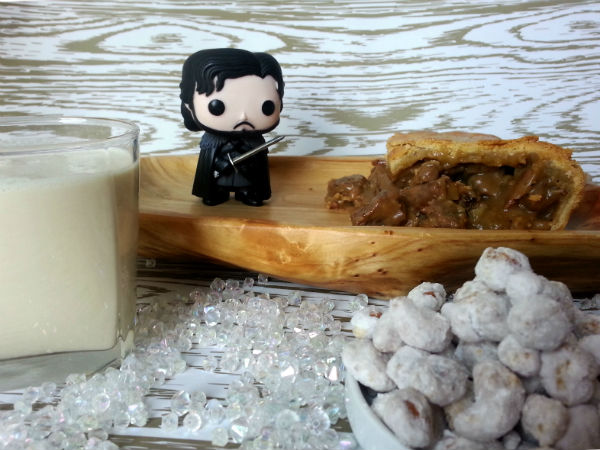