I think Adult Swim and Fox have been making that quite clear for some time now. We have an abundance of cartoons of various styles that are foul, nearly pornographic and completely NSFW. Whether it be the off-handed and strange humor of Aqua Teen Hunger Force, the overtly sexual nature of Archer, the foul-but-hilarious toilet humor of Shin Chan or the dark, disturbing plots of Moral Orel, the typical format of children’s programming has been transformed into complex quality programming for adults.

Even some of the animated programs that are intended for children are far more entertaining for adults than they used to be. A lot of shows have started slipping in some adult humor for parents that the children won’t pick up on but it goes a little deeper than that. For instance, Adventure Time might be a great show for your kid to watch, but it has deep underlying subplots of a post-nuclear society and a man driven to madness in a selfless act of the purest kind of love imaginable. Even back in the day, the Powerpuff Girls had fairly developed plots and references that kids might not understand, but were really solidly entertaining for adults. (Did you ever see the Beat-alls episode parodying the Beatles?) We don’t even need to get into how I grew up on Ren and Stimpy.

But this is all just television. What about film? Sure there are movies like Ted that use the concept of a talking teddy bear and childhood friend as a plot device and The Lego Movie hired all sorts of famous people to voice the characters so you’d go out of loyalty, but there hasn’t really been an actual Disney-esque adult full-length featured film.

Ok, not right now, we still have to wait until next year. But I’m so excited about it; I couldn’t wait until then to talk about it. Seth Rogen has partnered back up with writing buddy Evan Goldberg to create a 3-D animated (Pixarish), R-rated film about food in a grocery store. It’s called … wait for it … Sausage Party.

Featuring the voice talents of all of Seth’s friends: Jonah Hill, James Franco, Kristen Wiig, Michael Cera, Nick Kroll, Ed Norton, David Krumholtz and most recently, Salma Hayak (as a talking taco named Teresa); it has a lot of names backing up the effort. Not only does it look ridiculously adorable and very raunchy and inappropriate, it’s about food … so it’s a film after my own heart.

The plot revolves around a sausage and his friends that fall out of a shopping cart and need to get back to their aisle before the Fourth of July sale. Throughout the adventure they discover the truth of their existence and the fate of the food that leaves the grocery store.

I really hope it lives up to the potential because, as an Archer/Rick and Morty/Bob’s Burgers fan, I’d love to see adult cartoon humor successfully translated to the big screen.

So go on, get drunk and join the Sausage Party. (Below is a recipe to help you achieve both.)

In a large iron skillet, melt butter over medium heat. Continue to cook until the butter starts to brown and develops a nutty fragrance, 5-7 minutes. (Make sure not to burn.)

Add in onion slices and lightly salt and pepper. When the onions start to brown, move them to one side.

Add in sausages and position onions around them. Cook for 3-4 minutes to get a nice brown on one side of the sausage and then flip them.

You can serve as is or place on hoagie rolls with a nice whole grain mustard. 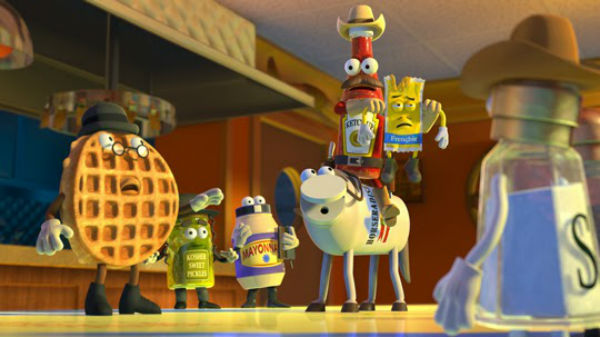