Full disclosure: I’ve never seen more than 60 seconds of True Blood. I’ve never read the books. I understand the premise and I think it has potential to be pretty cool, but I couldn’t tell you one way or the other if it actually is. That being said, I’ve had so many requests to do a True Blood-themed food column. Not an easy task for someone with zero knowledge of it. Luckily, I interviewed some friends and came up with a very happy little column for all of you.

From my limited knowledge, I think the coolest part of the show’s premise is the original notion that kicked off the show: the production of a synthetic blood product for consumption and the integration of vampires into human society. I feel like, not only is it a pleasant twist on the normal vampire story, but it also opens up the idea to me of food that exists for non-humans. What would a vampire food blog be like? How creative can you get, cooking with Tru Blood? I mean, yeah, you probably wouldn’t, but it lends itself well to a fun little vampire food blog concept that I like to play through my head.

We aren’t going to be playing with blood, synthetic or organic, today. Today I want to present you all with a collection of liquid sustenance that humans appreciate. Alcohol.

I’ve found a few craft beers that I think would be great for your True Blood parties throughout this final season (I’ll give you a full review of each of them) and, of course, a theme cocktail for your enjoyment. It seems only natural that you should sustain yourself on a liquid diet for True Blood night.

If you are feeling a little bitey though, I am including a recipe for True Death by Chocolate, a chocolate filled beignet that’ll help you keep down all that Tru Booze.

To all the fans of the show, I hope it turns out to be a glorious final season for all of you. Drink up!

Wake Up Dead – Barrel-Aged Imperial Stout by Left Hand Brewing Company – 10.2 percent ABV. The only way this title could have been better is if it was Wake Up Undead.

Pour hard. That means dump your bottle completely upside-down into your glass for the nitro pour. You’ll be amazed. It provides such a beautiful at-home nitro-like experience. The beer is a solid black and has a soft tan head. You get immediate notes of roastiness in the nose with bits of coffee and spice. The flavor is layered with roast, caramel, coffee and a bit of berry. You’ll be amazed at how not sweet it is. At 10.2 percent, you expect it to be cloying and boozy but it’s actually fairly light. The nitro qualities give it a nice smooth and creamy mouthfeel.

This will be a hugely pleasing stout to sip on throughout your final season of True Blood.

Monk’s Blood – Belgian Strong Ale by 21st Amendment Brewery – 8.3 percent ABV. I doubt there are monks being attacked in True Blood, but I couldn’t resist the big bold sans serif typography that reads BLOOD on this can. Totally thought it was review-worthy.

Dark red/brown, this beer is mostly opaque due to the sheer darkness in the color, but held up to the light, you can see it’s clarity. You can really get the ruby color from the light hitting the surface. The head was a light and creamy; it dissipated quickly. The warm malty notes in the nose are present, but light. Dark sweet fruits and sugar also come through the fragrance to the point that it almost smells sticky, though it doesn’t taste it. Once you sip, the beer is lighter bodied than you’d anticipate but still lingers a bit and has a nice soft carbonation. It has notes of spice and vanilla with an undercurrent of Cherry-flavored Craisins. The yeast doesn’t come through as super-Belgiany as I was kind of hoping for. The back end hits you with a bit of booziness.

Overall, a ridiculously delicious, solid beer … and perfect for curling up in front of the television with this summer.

Being a golden ale, this beer does not disappoint in color. A golden hue with a bit of cloudiness, this beer smells and tastes much like you’d expect from its yellow color and delicate head. The nose gives you notes of light fruits (lemon, pear and banana) with a heavy emphasis on yeast. Slight tart flavors give way to the bready flavors and finish in a bittersweet complexity. Light-to-medium body with a softer carbonation, this beer finishes well and leaves you wanting more.

If you’d like to rim your glass, mix a tablespoon of light corn syrup with red food coloring in a shallow dish. Turn a martini glass over and coat in the sticky blood-like concoction just before serving your cocktail.

Pour grenadine into the bottom of your (rimmed) martini glass. Strain cocktail over the backside of a spoon on top of the grenadine. Serve to vampires.

* I actually used some Red Velvet dye which was a bit thicker than regular food die and made the rim less drippy.

(Recipe from Back to the Cutting Board)

Mix the yeast, sugar and water in a large mixing bowl. Let sit for 10 minutes.

In another bowl, beat together eggs, salt and evaporated milk.

Pour egg mixture into the yeast mixture and stir well.

Add 1 1/2 cups of flour and mix on low or stir until combined.

Add butter and continue adding the remaining 2 cups of flour slowly until it’s all incorporated. Dough will be sticky.

At this point you can switch your mixer to the dough hook and beat on medium, adding more flour about a tablespoon at a time until the dough pulls away from the sides and forms a smooth ball (about 4-6 minutes). If you don’t have a mixer or would rather knead, place the dough on a floured surface and knead until smooth, adding a little more flour as needed (about 8-10 minutes). The dough may still be a bit sticky, but shouldn’t be overly so.

Spray a bowl with cooking spray and place the dough inside. Lightly place some plastic wrap   on top. Let rise for 2 hours in a warm spot.

Filling:  In a saucepan over low heat, mix together butter, chocolate, and half and half. Stir frequently until all the chocolate and butter is melted and the mixture is smooth. Remove from heat.

Pour into a bowl and cover Place in the freezer to harden.

Remove your filling from the freezer. Scoop out a heaping 1/2 tsp. and place in the middle of square. Gently place another square on top and pinch the sides together. Fold each side in about 1/4 inch and pinch again. It is VERY important that the beignet is well sealed.

When the dough is ready, place a deep pot on the stove and add enough oil to fill the pot about 1 to 1 1/2 inches deep.

Turn the burner to medium and preheat to 350 degrees. I would recommend using an instant read thermometer so you know the exact temperature at all times. It will take about 10-15 minutes to heat up. If you don’t have a thermometer, you’ll know it’s ready when you sprinkle some flour in the pot and it sizzles.

Set several layers of paper towels   near your pot. Fill a paper or plastic bag   with powdered sugar and place that near the paper towels  .

When the dough is cut and the oil is at the correct temperature, add a dough square, one at a time, with a slotted spoon  . Don’t add too many at once or you may wind up burning them. Use the slotted spoon  to flip them over every 30 seconds. Fry for 2-3 minutes or until golden brown on both sides.

Let cool for a minute and then transfer to the bag of sugar. Hold the bag closed and toss to coat. Repeat with remaining squares. 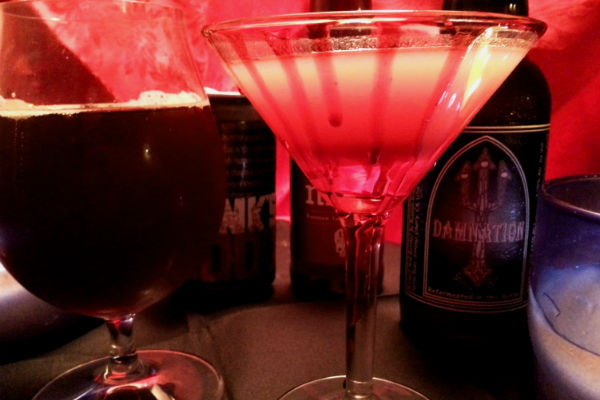