Spoiler Warning: Maybe don’t read this (or anything else on the Internet) if you aren’t caught up.

Tomorrow (Friday, February 27th), Netflix is giving us the gift of President Underwood.

When the second season ended last year, our favorite southern democrat had manipulated every situation in Washington to bend everyone to his will. Through a series of complicated political maneuvers (a lot of which, I’m still not even sure I understand), Francis Underwood is sworn in as the 46th President of the United States. He’s had to lie, beg and murder to get this position. If he does this much just to get the Oval Office, imagine what he’s going to do while he’s in there.

That last monologue from Kevin Spacey, punctuated by the two fist pounds on the desk, is in my top moments of television. I get so damn excited when I watch it.

The bitch of it is … it’s a Netflix program. Which, don’t get me wrong … I love and respect Netflix more than my own mother. But I WILL binge watch the show. Then I’m stuck waiting a whole year before I get more. It’s painful. So painful.

What do you do with a year of downtime? You plan theme recipes. Or at least I do.

Here we go. A year’s worth of stewing about House of Cards yields the perfect recipe to make for your marathon this weekend:

Shut up, it is too cool! It’s Frank, on a bun. An all-American beef frank, topped with Freddy’s BBQ rib meat (cooked in BBQ sauce) and a majority whipped aioli. The amount of puns and show-related content I put in one recipe … are you kidding me? I think it’s a Bacon and Legs record. Oh, also, it’s really fucking good.

Side note: If you haven’t seen the Sesame Street parody of House of Cards, check it out… it’s so well done, I squealed in excitement … 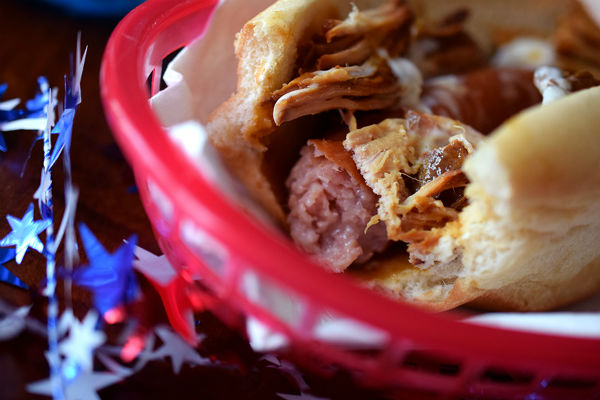 Hobo Radio 586 - X always gave it to ya
Hobo Radio Interview - Elizabeth Ito, creator of City of Ghosts
Hobo Radio 467 - This podcast is a Tide ad
Hobo Radio 458 - I should have been listening before
Hobo Radio 410 - Everyone's dying, so go to New Hampshire
Bacon and Legs - Cowboys 4 Angel Food Cake (Gigolos-inspired recipe)