I used to be ashamed of this, until I realized I’m just too fucking tired to give a shit. I’ve watched most every episode of Keeping up with the Kardashians and yes, I follow her on Twitter. I also follow the parody account Kim Kierkegaardashian (and I highly suggest you do too!). I like her and her sisters and so the fuck what? That’s the cool thing about being a person – you can do whatever the fuck you like (within reason).

So if Kim Kardashian chooses to share a nude selfie, more power to her. It’s not my style, but it doesn’t have to be. And I suppose if Bette Midler chooses to make a comment chastising Kim Kardashian for once again showing her nude body to the world, well, that’s her right.

But just because it is her right does not make her right.

When Kim Kardashian posted this:

When you're like I have nothing to wear LOL pic.twitter.com/UlSLZb1fp1

Bette Midler clapped back with this:

Kim Kardashian tweeted a nude selfie today. If Kim wants us to see a part of her we've never seen,
she's gonna have to swallow the camera.

Get it?! The joke is that Kim Kardashian is such a notable slut that we’ve seen every single part of her except her intestines! She can’t offer us anything new because we’re bored of her body! It’s funny because she’s a whore!

Unsurprisingly, people have eaten this shit up. It’s hip to hate on the Kardashians – and not completely without cause. There’s something completely infuriating about a family who has become ultra-rich based on their ability to market themselves as a brand. I think that says more about society than the Kardashians themselves, but I get it. I’m not the only person who refuses to pick up the phone when an unknown number calls because I just know it’s a student loan officer hounding me for a payment. Seeing people who are rich for no reason when some of us can’t afford the dentist is bound to make anyone’s blood boil. And if Bette Midler and others want to comment on the Kardashians as a symbol of the growing divide between rich and poor in this country, they can go ahead. That’s fair game. Kim Kardashian’s body, not so much.

It would seem that we want it both ways. We want to seem like a progressive society that is moving towards body positivity – while still shaming women when it suits us. When Lena Dunham writes nude scenes for herself into Girls, she is called brave (by many, there are still detractors). And of course she is, because Lena Dunham doesn’t have a conventionally-sexy figure. We can view ourselves as heroic for daring to look at a “real woman”. The same thing happened when the nude photos of Amy Schumer came out, revealing that she has a few rolls of fat when she sits. We call her a hero, she makes jokes about how ridiculous that is and we can all feel good about ourselves.

We’re all good people when we put unconventional beauties in the media as sex symbols.

But Kim Kardashian is sexy. She’s a stunningly beautiful woman with a sensual figure. Most everyone finds her at least a little attractive. Perhaps it’s because she possesses a body we’ve been conditioned to objectify, but when she is naked it doesn’t come off as heroic the way it does with Lena Dunham and Amy Schumer. It comes off as slutty and boring. We expect her to do more with herself. The number of people who have responded to her tweet with some comment about how it would be shocking if she ever said something intelligent is appalling. It’s also a testament to the fact that people only pay attention to her when she’s nude. I’d argue that bringing attention to conditions such as placenta accreta and the Armenian genocide qualify as intelligent speech, but fuck it, she’s a dumb whore.

Here’s the thing – Kim, Lena and Amy are all entitled to show their bodies whenever and however they want. And most of the responses to all of them are pretty fucked up. Fat girls aren’t brave for being naked and hot women aren’t whores for doing the same. They’re women with bodily autonomy that are free to do whatever the hell they like.

And it’s not witty to slut shame a woman because she chooses to present herself in a way you don’t like. Frankly, it’s boring. There’s been a meme circulating for a while that goes, “In a world full of Kardashians, be a [insert whatever properly intelligent type of woman you feel is better]”. But maybe it doesn’t matter what you do in relation to the Kardashians, or Bette Midler, or any other woman.

Maybe, in a world full of Kardashians, you should just be whatever the fuck you like. 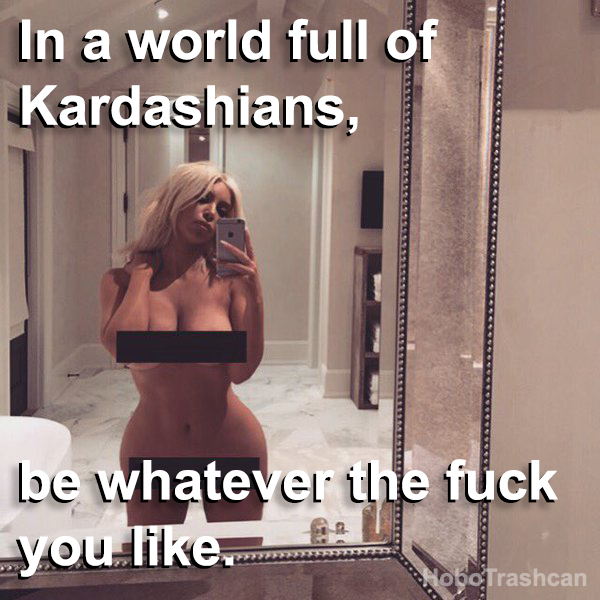 Molly Regan is an improviser and writer in Baltimore. She like chicken pot pie, Adam Scott’s butt and riot grrl.