The opening 20 minutes of this week’s episode is easily one of the best sequences Game of Thrones has ever done. And it’s up there among the top moments any television show has ever done.

Even if you hadn’t pieced together Cersi’s plan to blow up the Sept, the show did such a great job setting the mood that the whole thing felt eerie and unsettling. The music was haunting and the show was so deliberate in its slow pacing that you could tell something big was coming – perhaps the execution of Cersi Lannister.

And if you had pieced together Cersi’s plan (or read a theory about it online), then the sequence still worked because you were wondering if she would pull it off and, if so, how bad the fallout would be. And it turns out that it’s far worse that we could possibly imagine.

All of the Sparrows, most of the Tyrells, a grand maester and the rest of the nobility in King’s Landing are all killed. An ancient building steeped in Westeros history is leveled. And, with the enormous blast radius of the explosion, surrounding buildings also caught fire. Not to mention the fact that Tommen, when he sees what his mother has done, takes his own life.

This is simultaneously Cersi’s greatest and worst moment. She kills her biggest rival, Margaery (who, tragically, figured out Cersi’s plan, but was helpless to escape), destroys the out of control religious order she created to defeat Margaery and is ultimately crowned queen of Westeros. But she loses her last child in the process and has likely lost the support of Jaime as well, who looked very uncomfortable during her coronation (and who spent the episode trying to convince himself that he is a better man than Walder Frey). Plus, it’s unclear if her subjects know she was behind the attack on the sept or just how happy they are to see her crowned queen. 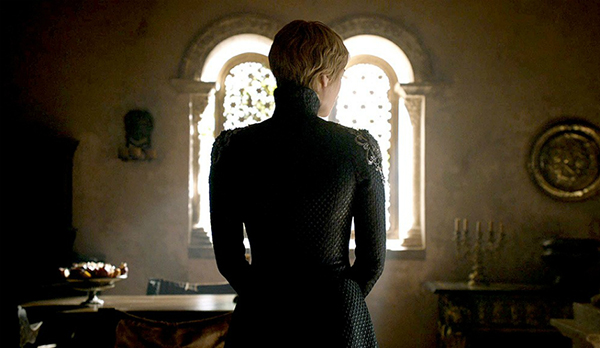 Not to mention the fact that there is political upheaval to the north and south of her. The north finally reconciles, naming Jon Snow the King of the North, thanks to a moving speech by Lyanna Mormont. And Arya reemerges in Westeros to kill Walder Frey and his sons, weakening the Lannisters hold on the Riverlands.

Plus, we discovered, thanks to Bran’s vision, that Jon Snow isn’t a bastard. He’s actually the son of Lyanna Stark. This would seem to confirm the longheld fan theory that Jon’s real parents are Lyanna and Rhaegar Targaryen, who stole her and locked her in the tower where Ned found her. While currently Bran is the only one who knows this information, if Jon is able to find this out (and somehow prove it), it gives him a pretty legitimate claim to the Iron Throne. That’s a huge problem for Cersi.

And things aren’t any better in the south, where the Sand Snakes of Dorne and Lady Olenna Tyrell have aligned themselves with Danny. Danny already has three dragons and a massive army. If she already has Dorne and the Iron Islands on her side, there aren’t a lot of obstacles between her and the Iron Throne at this point.

And I haven’t even mentioned the Night King and his army of the undead. The show told us this week that the Wall’s magic keeps them from being able to cross into Westeros, but now that winter is here, I have to imagine they will find a way to make it through. It’s likely that Bran may inadvertently be the cause of that, like he was in the cave.

Overall, I thought it was an amazing finale. There was so much packed into one episode, but it didn’t feel crowded in any way. And, most importantly, things like the opening sequence were given room to breathe. Cersi’s plan was really a game changer, one that will likely have ramifications that last through the rest of the show.