“Darkness is good … Dick Cheney, Darth Vader, Satan. That’s power. It only helps us when they get it wrong. When they’re blind to who we are and what we’re doing.”
– Steven Bannon to The Hollywood Reporter, November 18, 2016

Many eyebrows have been raised over the above quote. It’s gained quite a bit of traction this past week as Bannon helped draft President Donald Trump’s controversial executive orders, said the press should “keep its mouth shut” and, in a very “Cersei Lannister filling her small council” move, was made a prominent member of Trump’s National Security Council. People have begun to see Bannon as the architect of all of Trump’s plans (causing the #StopPresidentBannon hashtag to trend on Twitter this past weekend) and have used the above quote to start openly comparing him to Darth Vader.

This is problematic for two reasons. The first is that it plays right into Bannon’s hand. Most times, when people use this quote, they do so out of context. They don’t include the final two lines: “It only helps us when they get it wrong. When they’re blind to who we are and what we’re doing.” Instead, people like to quote the first part and pretend that Bannon is gushing about the intoxicating power of Darth Vader and Satan. But he’s doing the exact opposite. What he was really telling the Hollywood Reporter is that people comparing him to Darth Vader or Satan reduce him to a cartoon villain, which actually helps his efforts since people don’t take those criticisms seriously.

What he is actually saying is that there is power in being compared to Darth Vader or Satan. There’s a strategic advantage in being reduced to a two-dimensional villain since it takes complex issues and reduces them to a black and white discussion of good and evil. Those on the right see Bannon get called Darth Vader and they simply roll their eyes and chalk it up to liberal snowflakes crying about their side losing instead of actually looking at Bannon’s policies and analyzing them critically. It’s overly-simplistic name calling that keeps those hurling the insults from being taken seriously. And Bannon’s skin is thick enough to brush off these juvenile comparisons by realizing that, in the long run, they help him more than they hurt him (unlike a certain thin-skinned boss of his who is prone to whiny Twitter rants over the slightest of criticisms).

This is all important to realize as we continue the ideological battle for the soul of this country. But, it’s not my only issue with comparing Bannon to Vader. There is a second, and possibly more important, reason these comparisons should stop – they are completely unfair to Darth Vader.

Bannon and Vader have little in common. In fact, the only real similarity I see is that Bannon shares a slight resemblance to Sebastian Shaw’s unmasked Vader at the end of Return of the Jedi: 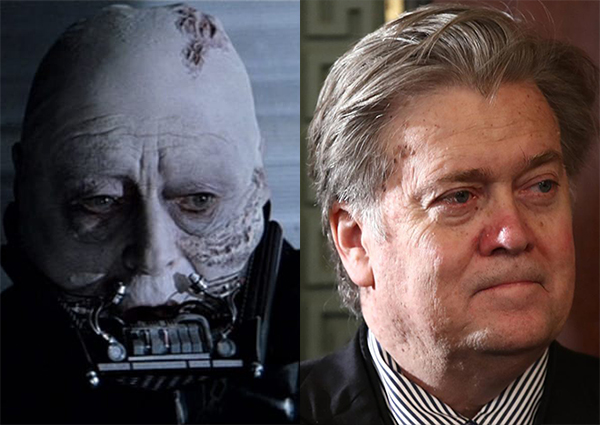 In the original trilogy, Vader is the primary antagonist. He’s the face of the Empire. If we’re comparing Trump’s Presidency to Star Wars, Trump should be Vader. Bannon would be the Emperor, the grotesque, hooded figure with bad skin lurking in the shadows, secretly calling the shots. He’s the man with the plan while Vader/Trump is simply the blunt instrument he uses to enact his evil schemes.

But even that comparison doesn’t really work. Vader came from humble beginnings and still has good in him. Return of the Jedi is all about Vader’s redemption. Trump never had humble beginning. He was never “seduced” by the dark side. He’s always been on the side of the Empire. There’s no Anakin Skywalker lurking somewhere inside him. Trump also lacks the gravitas Vader has when entering a room. Vader is a presence to behold; Trump is a clown.

No, if anything, Trump is Kylo Ren. He’s a whiny, entitled brat with well-connected parents who gave him everything he could ever want or need. He never had to work for anything in his life. He’s prone to tantrums and theatrics. And he battles a charismatic black man who worked inside the system he’s now in charge of and a powerful woman.

Which would make Bannon Snoke, the shadowy figure pulling Kylo Ren’s strings in The Force Awakens. Which seems about right. He’s a strong figure we know very little about who leads an army that is clearly just a rebranded version of an old fascist regime (Snoke’s First Order and Bannon’s “Alt-Right”).

So stop comparing Steve Bannon to Darth Vader. It plays right into his hands. And, more importantly, from a pop culture nerd standpoint, it’s a terrible metaphor for who he is and what he represents.

We need to demand more from our pop culture metaphors. And demand less Bannon from our government. 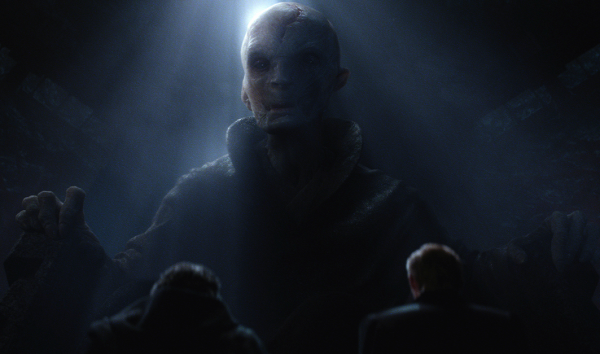