Sometimes I picture Wilbur and Orville Wright playing together as children. I like to imagine that fateful day in 1878 when their father returned from a church trip clutching the pivitol toy helicopter he gifted the two young lads.

In Kitty Hawk, North Carolina 25 years later, the siblings made history by successfully creating and flying the world’s first functional airplane. It was that humble toy helicopter, which they played with daily until it broke, that sparked their initial interest in flight.

We never know what fate has in store for us. The smallest moment can forever alter the course of our lives. One split second is capable of sending a ripple through our time stream, forging a path for us down Robert Frost’s proverbial “road less traveled.”

Though I had no awareness of it at the time, April 14, 2010 was a moment that forever altered the course of my life. It wasn’t a toy helicopter I was handed on that day – it was, as I described it at the time, “an artery-clogging amalgamation of meat and cheese forged by Lucifer himself.” I was speaking, of course, about the KFC: Double Down, a breadless sandwich comprised solely of secret sauce, two pieces of bacon, two slices of Monterey Jack cheese and two thick slices of fried chicken.

As America’s 33rd President Harry Truman once said, “Actions are the seed of fate deeds grow into destiny.” My fate was sealed that dark April afternoon I grappled with the Double Down. I was able to vanquish my fried foe, but in doing so, I sent a signal to the universe that their culinary colossi were no match for my cast-iron stomach.

The gods saw this as a challenge. While I attempted to move on with my life in the subsequent seven years, dark forces conspired to concoct an even greasier, deadlier comestible. I should have known it wouldn’t end once I successfully consumed the Double Down. Life is rarely that simple.

I moved 3,00 miles away. I built a new life with the woman I love – a woman whose life is unblemished by the events of April 14. I put my days of eating appetizing abominations firmly behind me. However, while that day was in my rear view, a new challenge was barreling straight toward me at 120 miles per hour.

It’s only now, in hindsight, that I realize every second that’s passed since I disposed of the final remnants of my previous skirmish has been leading up to my second, and greatest, challenge. Tossing that empty, grease-stained cardboard container into a trash can inside the harshly-lit Kentucky Fried Chicken franchise in Richmond, Virginia was simply a prelude to now … to the day I went face-to-shell with Taco Bell’s Naked Chicken Chalupa. 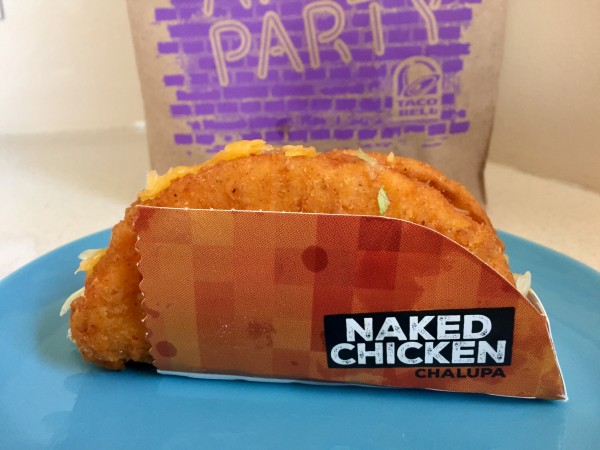 Taco Bell has never shied away from the unconventional. There’s a reason their cuisine is favored by the inebriated late-night crowd. They’ve used everything from Doritos to fried tortillas as meat and cheese conveyances. Their savory offerings are the stuff of stoners’ dreams.

However, even the loftiest of dreamers among us – the star-gazers and rainbow-tune melodists mentioned in Kermit the Frog’s signature balled – couldn’t have conceived of the Naked Chicken Chalupa. Like a deranged Buffalo Bill trapping unsuspecting do-gooders in the bottom of his well in order to use their epidermis as accoutrement, the powers-that-be at Taco Bell have created a shell for this lettuce-and-tomato-adorned leviathan out of deep fried, white meat chicken.

I met my fate head on at a quiet Taco Bell drive-thru in Los Angeles. However, this time I decided to consume my combatant inside the comfort of my own home. No one else should be forced to witness me grapple with my appetizing adversary, for that is a weight that I best carry alone.

“How was it?” you might be wondering. I can best describe it as the feeling one has when free falling toward an unforgiving Earth that is rushing up to meet you and seal your grisly fate, only to to have your parachute deploy just in the knick of time. Exhilarating and delicious, with a lingering awareness of one’s own mortality.

The avacado sauce pairs perfectly with the crunchy shell, cheese and vegetables. There is a harmony in every mouthful. Every bite beckons you to go further. But somewhere, in the recesses of your mind, you are aware that this is secretly a siren’s call leading you toward your untimely demise. It’s pure euphoria in your mouth, but to consume the Naked Chicken Chalupa more than once is to head down a path of diabetes, coronary heart disease and, ultimately, death.

I quite enjoyed the Naked Chicken Chalupa. But, like the Wright Brothers after their immortal first flight, I couldn’t soar too close to the sun forever. At some point, gravity demands that you return back to Earth. Which is why my first Naked Chicken Chalupa shall also be my last. I must return to my humble life … until fate comes calling again. 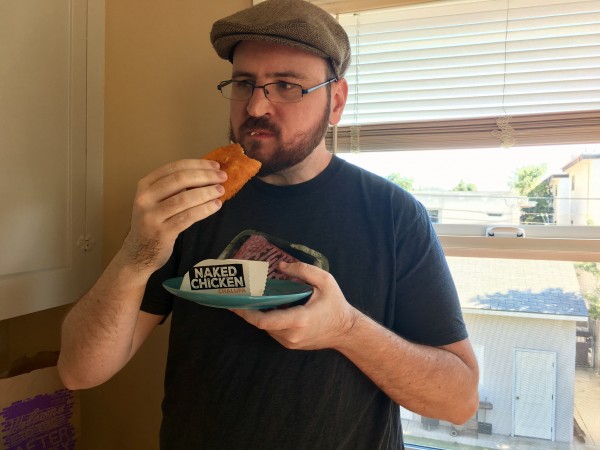