The Belko Experiment has been billed as “Office Space meets Battle Royale.” I wish the film lived up to that comparison because I would have really enjoyed that film. Unfortunately, The Belko Experiment doesn’t invest enough time in office politics or workplace dynamics to earn the Office Space comparison. Instead, it fast tracks its way to the violence and horror, delivering a two-hour killing spree that feels unsettling because of how close it hits to home in a world where mass shootings have become common occurrences.

From a technical standpoint, it is a well-made film with visceral action and colorful characters. There were many scenes I enjoyed. Fans of graphic horror films are likely to enjoy the brutality. However, there is something unsettling about the story that feels a little too close to home.

It’s hard to view a film where coworkers are brutally slaughtered as escapist entertainment. Perhaps others will be able to watch the film without thinking about its parallels to real-world tragedies, but I wasn’t able to separate the two. There was one scene, in particular, where a group of employees were lined up on their knees and executed one by one that I found particularly upsetting. Your mileage may vary, but it is certainly something you should consider before heading out to see this one.

Still, fans of films like Battle Royale and The Hunger Games may enjoy seeing a battle to the death playing out inside an office building. The film’s 80 American employees are locked inside their office building in Bogotá, Colombia and are told they must kill 30 of their coworkers in two hours or the people holding them hostage will slaughter 60 of them. They discover they already have explosives embedded at the base of their skulls, so their captors can kill any one of them at any time with the flip of a switch. 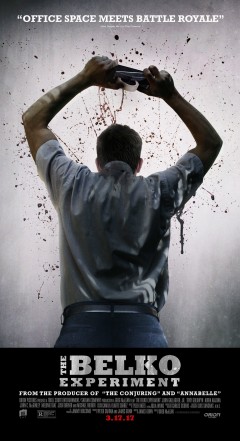 Several factions emerge with different ideas of how to proceed. Some focus on trying to escape (which seems impossible, since they are under constant surveillance and the building is locked down from the outside) or signaling someone on the outside that may offer help. Others quickly give in to their survival instincts, make decisions on who they think should live or die or taking matters into their own hands with any weapons they can find. It doesn’t take long for things to quickly break down into chaos.

Some obvious villains emerge, lead by the company’s boss Barry Norris (Tony Goldwyn) and his sadistic enforcer Wendell Dukes (John C. McGinley). Mike Milch (John Gallagher Jr.) tries, in vain, to be the voice of reason, while also attempting to protect his girlfriend, Leandra (Adria Arjona) and the office’s security guard Evan (James Earl), who has the only key to the building’s cache of weapons.

John Gallagher Jr.’s character, Mike, felt like a complete misfire to me. He’s positioned to be the film’s protagonist, but I often found myself frustrated by his choices. He came across too headstrong and naive in his actions that I sympathized with Barry Norris and Wendell Dukes for sizing him up as a threat. Mike continually puts himself in harm’s way instead of thinking tactically or diplomatically. There are multiple times in the first 20 minutes alone where he probably should be killed, but isn’t.

What’s most disappointing about the film’s use of Mike is that there are other characters in the office who are more compelling who are given less attention. His girlfriend, Leandra, has a much more interesting arc as she has to deal with Wendell’s creepy affection for her while trying to survive. Dany Wilkins (Melonie Diaz) also emerges as a plucky survivor with a knack for hiding who feels like she could be a John McClane-esque hero of the film if only it would let her. I also enjoyed every moment of screen time given to Marty (Sean Gunn), a character who slowly and hilariously descends into madness believing the office’s water supply has been drugged in order to get these coworkers to fight each other.

The Belko Experiment has a few compelling scenes and characters, but overall it just felt like a misfire. The film lacks the humor and humanity to make it rise above feeling like a gratuitous bloodbath. Plus, it’s protagonist is frustrating and uncharismatic. It’s a film that ultimately would have benefited from more Office Space and less Battle Royale. 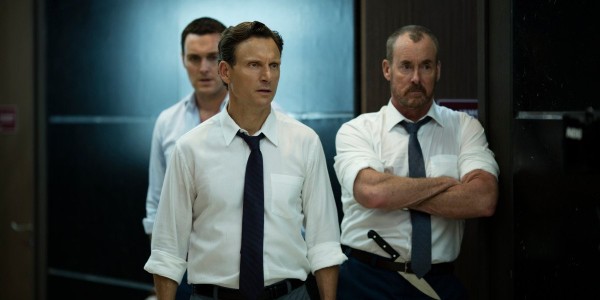