When I was a little girl, I refused to eat my dinner unless my mother sang me all of “Little Town” from the original Beauty and the Beast soundtrack first. Every note, every joyous “Bonjour!” Every single beat or else I would not eat. To say Beauty and the Beast was important to me would be an extraordinary understatement.

I have been waiting for a live-action version of my favorite fairy tale for 25 years. I was not disappointed.

Remakes are tricky – you don’t want to completely obliterate the story people have come to know and love, but you also don’t want a shot-for-shot rehashing of the original. Many remakes fail to find the right balance and end up coming off as unnecessary and bland. Beauty and the Beast, however, finds a solid middle ground.

Like the original, we are introduced to the story with the Beast (Dan Stevens) and all of his servants being cursed because of their master’s inability to show kindness to a stranger. Belle (Emma Watson), meanwhile, is still a bookworm and an outsider in her little town. Her father (Kevin Kline) is still a bit of a loon, though toned down from the original. (He dabbles in musical toys rather than axe-wielding machinery). Gaston (Luke Evans), the town hunk and renowned expectorator, is still a jerk determined to make Belle his wife. There’s nothing that betrays the original, as can often happen with remakes. (Unless, of course, you simply can’t stand the idea of a gay man existing within the realm of a movie. I guess you’re kinda fucked there.) 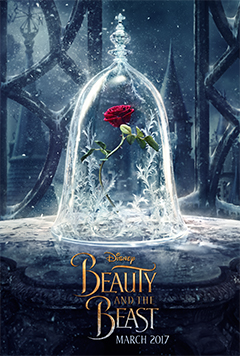 What this Beauty and the Beast does is expand aspects of the original Disney story that were either forgotten or toned down. This film makes the intriguing choice to explicitly explain what happened to Belle’s mother, a character completely left out of the original. This not only solves a major plot hole, but gives a solid explanation as to why Belle’s father is a bit off (or completely bananas, going by 1991’s version). With her mother’s absence explained, we get a much better sense of Belle’s protection of and duty to her father. It also makes her insistence that she replace him as the Beast’s prisoner more grounded.

Speaking of that moment, the writers seemed to be committed to turning Emma Watson’s Belle into the feminist princess that so many have claimed the cartoon original was. She has agency and confidence. When Gaston asks to take her out to dinner, she refuses with no explanation. No fake plans, just a confident “No.” When her father refuses to switch places with her as the Beast’s prisoner, she simply throws him out of the cell and locks herself in. When the Beast yells for her to come to dinner, she tells him not to speak to her that way. It’s awesome as an adult to see Disney give Belle the agency she deserves and even more delightful to imagine the young girls who will see this as normal.

Luke Evans steals the movie as Gaston. I was skeptical, but Evans absolutely nails it. From professing his love to himself in the mirror to rallying the townspeople to “Kill the beast!”, Evans perfectly balances the comedy and drama of a Disney villain. The other standout is Josh Gad, expertly cast as LeFou, Gaston’s recently-outed sidekick, who spends half the movie pining for him and the other half grappling with his conscience over their devious plans. He is so spot on that, at times, it feels like you could drop his audio into the animated film and hardly notice the difference.

Lumiere (Ewan McGregor) and Cogsworth (Ian McKellen), an anthropomorphic candlestick and clock, respectively, are perfect foils as they try to both break the enchantress’s spell and keep the castle running smoothly. Both stay true to their animated counterparts – Lumiere is charming and witty as he works to help love blossom between Belle and the Beast in order to break the spell (while continuing his own romance with Plumette, the unnervingly-sexy feather duster). Meanwhile, Cogsworth is rigid and most concerned with self-preservation and keeping the Beast happy. Lumiere and Cogsworth routinely butt heads, but their friendship is evident throughout; including their nightly chess matches.

Oddly enough, Belle and the Beast are the least interesting characters in the ensemble. Emma Watson, the intellectual, self-proclaimed feminist, feels like the perfect choice for Belle, but her performance feels lackluster. It’s not bad, it’s not great – it’s just okay. There are moments that work, but overall she doesn’t live up to the iconic standards of a Disney princesses.

The Beast feels lifeless due to an over-reliance on CGI. There is an uncanny valley quality to his overall appearance. I wish they would have opted for practical effects instead of CGI, at least in part, in order to bring some life and warmth to the Beast. It’s hard to believe that Belle would end up falling for such an obviously cold, soulless computer program. Perhaps this accounted for Emma Watson’s lack of charisma and connection with her costar (since she likely spent most of her days playing to green screens and characters who weren’t actually there).

Overall, the movie is delightful. It’s possible the over-reliance on CGI and the blandness of the film’s two leads may ruin it for you. However, if you were a young child when the animated version debuted, or are one now, you will likely be enamored with the magic of this live-action remake. So, if you are still demanding pre-meal renditions of “Little Town,” then this is likely the film for you.