The opening sequences of Guardians of the Galaxy, Vol. 2 – which features an adorable dancing Baby Groot (Vin Diesel) dancing to “Mr. Blue Sky” by Electric Light Orchestra while his teammates battle a giant, carnivorous alien creature – filled me with the same joy and sense of wonder that writer/director James Gunn’s first Guardians of the Galaxy fill did three years ago. For that moment, I got goosebumps in anticipation of Gunn capturing lightning in a bottle once again.

Unfortunately, the rest of the film, while often fun and emotionally-satisfying, never again reaches that peak its predecessor did. While Vol. 2 has a lot of fun concepts and many wonderful character moments, it is ultimately bogged down by a dull second act and a muddled climax gives the audience yet another comic book movie where the heroes battle a generic alien apocalyptic threat.

The film reunites us with our band of cosmic misfits – Peter “Star-Lord” Quill (Chris Pratt), Gamora (Zoe Saldana), Drax (Dave Bautista), Rocket (Bradley Cooper) and Baby Groot. While they are enjoying a boost in popularity thanks to the events of the previous film, they quickly squander their newfound goodwill by botching a job for a species of beautiful golden Adonises known as the Sovereign, which angers their high priestess, Ayesha (Elizabeth Debicki). She sends her army after them, which leaves our heroes scrambling through space to flee their pursuers. Things look bleak … until the Guardians of the Galaxy are saved by a mysterious figure known as Ego (Kurt Russell), who claims to be Peter Quill’s long lost father, and his companion Mantis (Pom Klementieff).

The gang is unsure if they can trust Ego, but ultimately Quill decides he has to take the chance to finally get to know his father. While he heads to Ego’s planet with Gamora and Drax, Rocket and Groot stay behind to make repairs to their ship and to watch Gamora’s sister Nebula (Karen Gillan), who the group has taken hostage. The Sovereign continue to search for the Guardians, hiring Yondu (Michael Rooker) and his Ravagers to track down the group and bring them back to Ayesha.

It’s a solid premise that feels like it should work. But the film pulls the breaks on the story’s momentum to explore the characters and their group dynamics further, which is admirable, but ultimately kills the film’s momentum. The stakes continue to get higher for everyone involved, but it never feels that dire because the story is moving along to slowly and casually. I kept waiting for the film to kick into a faster gear to build to an exciting conclusion, but it just slowly stumbles its way to the climax, which feels disjointed and clunky as a result. Making matters worse, the final confrontation lacks the personality and visual wonder of Gunn’s previous action scenes. Instead, we get world-devouring space goo and a fight sequence with far too many moving parts that feels like it was shot by a child with ADD who keeps picking up and swinging around new toys.

That being said, there is still plenty to enjoy about the film. For starters, Kurt Russell is so charming and compelling as Ego that he almost carries the film on his charisma alone. He’s a great choice for the character and, even though his character feels fairly one-dimensional, he somehow makes it work.

The film also really got me to care about Yondu and Nebula, who both get a lot more to do this time around. Yondu, in particular, surprisingly becomes the heart of the film as he’s conflicted about being tasked with retrieving Quill (and with Quill meeting up with his father, after Yondu intentionally spent years keeping the two apart for reasons that eventually become clear as the story unfolds). Nebula gets a chance to shine by showing just how big of a threat she can be when left to her own devices.

Rocket is also given more emotional depth this time around, which was a really welcome turn for the character. And Quill and Drax continued to be delightful. Gamora, unfortunately, still feels underdeveloped as she mostly exists as a love interest for Quill and an antagonist to Nebula. I would like to see more energy put into exploring who she is on her own, not just what she is to other people. Newcomer Mantis also feels underdeveloped – she seems to exist more as a plot device/foil for Drax than a fully-realized character.

Visually, the film is beautiful. Gunn gives his alien worlds a rich color palette, making them shine with gold characters and lush pink skies. It’s a feast for the ears as well, giving another memorable retro soundtrack, which includes great tracks like “The Chain” by Fleetwood Mac, “Bring It On Home” by Sam Cooke and “Father and Son” by Cat Stevens. (There is also a quirky original song called “Guardians Inferno” that plays during the credits that features a delightful surprise artist.)

While I found the overall story lacking, I continue to appreciate James Gunn’s ambition and creativity. Even though the story doesn’t live up to its predecessor, I still enjoyed spending more time in this world with these characters. Gunn is also capable of delivering powerful emotional moments when you least expect them, which still resonated with me. It’s a flawed film, but one with enough heart and creativity to make it a worthy viewing experience. 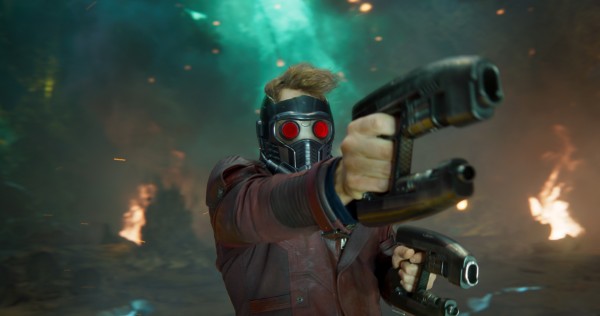