“Arya Stark, your mission, if you choose to accept it, is to travel to The Twins, assassinate Lord Walder Frey, then impersonate him to infiltrate the castle and take down all others responsible for the Red Wedding. As always, should you be caught or killed, the Faceless Men will disavow any knowledge of your actions.”

I loved the cold open of this episode so much, even though all it needed was a lit fuse and that iconic theme song to make it a note-perfect beginning to a Mission: Impossible film. It was fun watching the opening thinking that perhaps it was a flashback, only to have it slowly dawn on me that it was Arya in disguise. I’m still not a fan of last season’s clunky Faceless Men plotline, but I’m glad we’re on the other side and Arya now has this particular set of skills. (Also, if she’s this good at embodying Walder Frey, it does not bode well for Cersi and her inner circle.)

“Dragonstone” started on an amazing high note. The rest of the episode wasn’t quite as exciting, but it did have some really wonderful character moments. The ending felt particularly noteworthy, with Danny finally setting foot on her home soil and finally starting her quest to retake Westeros. I like that there wasn’t a lot of dialogue in the scene. It was the right move to show us what Danny was feeling rather than have her tell us. After all that happened in last season’s finale, Danny deserves a quiet moment to soak in her homeland.

Overall, while I suppose a quieter, more introspective episode was inevitable to start the season, it felt odd to me that the King’s Landing scenes had a “business as usual” feel to them. As far as we know, there is still a smoldering crater in the middle of the city filled with the corpses of Cersi’s enemies. I get that eliminating her rivals would solidify her power, but it seems odd that no one is concerned that their Queen orchestrated what it likely the largest terrorist attack ever to unfold in King’s Landing. Cersi and Jamie discuss the threats looming outside of the castle walls, but it still seemed strange that no one in King’s Landing seems concerned about Cersi’s actions or, at the very least, invested in rebuilding the damaged buildings.

The quieter, introspective feel to the episode worked particularly well for the Hound’s scenes. It’s hard to imagine him becoming a true believer in the Lord of Light, but he clearly saw a vision in the flames. He’s also grown considerably as a person and feels great remorse for the family he left for dead seasons ago. I’m interested to see where his character is headed.

I’m, however, much less interested in seeing Sansa and Jon Snow bicker over conflicting leadership styles. It’s very hard to side with Sansa at the moment. She’s openly questioning his leadership in front of their followers. She’s withholding information from him about her dealings with Littlefinger. These are all decisions that are going to end badly for both of them.

Also, I may be in the minority on this, but I really enjoyed Ed Sheeran’s cameo. You can count the number of truly pleasant moments Arya Stark has had throughout the show on one hand. After vanquishing House Frey, it felt nice to give her a moment to relax and to laugh with some of Cersi’s soldiers. We are all very invested in the Game of Thrones, speculating on who will sit on the Iron Throne when it’s all said and done, but it’s important to have moments like this that remind us most of the inhabitants of Westeros are just regular people who want to live their lives. Cersi may be a monster, but her men are just regular guys who enjoy serenading one another with their melodic voices.

Outside of the opening scene, this episode isn’t the most memorable. But I feel like it did a good job reacclimating us to the world and setting the stage for all that is to come. This was the calm before the storm. Danny is on her home soil again. Shit just got real. 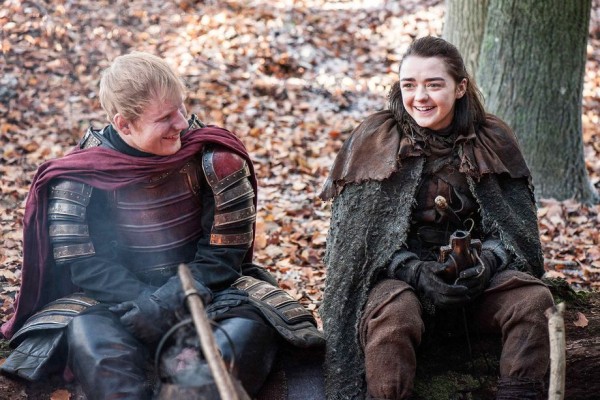