With so many characters and so many separate storylines happening at once, what’s particularly enjoyable at this point in Game of Thrones is finally getting to see different characters meet face to face.

Even if the Dorne storylines haven’t been my favorite, it felt impactful to see Danny, Tyrion, Varys, Yara, Olenna and Ellaria all gathered around a table at Dragonstone plotting to retake the Iron Throne. It had a similar vibe to seeing all of the Super Friends gathered together to take on the Legion of Doom. (If they are the Super Friends, that would make Danny Wonder Woman, Tyrion Batman, Varys Robin, Yara Aquama, Olenna Cyborg and Ellaria Rima the Jungle Girl.)

It will be interesting to see how Jon and Danny get along. They both are laser focused on their individual quests – Danny wants to retake the Iron Throne while Jon wants to save the realm from the White Walkers. Their missions aren’t at odds with one another necessarily, but considering Danny wants him to bend the knee and pledge loyalty to her, it may be challenging to convince them that working together is in everyone’s best interest. (It may help if they realized, as Bran’s visions last season hinted, that they may be brother and sister.)

Danny also met another character for the first time – Melisandre. Their conversation touched on the prophecy about Azor Ahai, a legendary warrior who the followers of the Lord of Light believe will return. You can read more about Azor Ahai at this wiki, but here’s the relevant quote: “According to prophecy, our champion will be reborn to wake dragons from stone and reforge the great sword Lightbringer that defeated the darkness those thousands of years ago.”

Melisandre originally believed that Stannis was the reincarnation of Azor Ahai. When Jon Snow was resurrected, the show hinted that perhaps he was the one. But Missandei’s clarification on the lack of a gender-specific pronoun in the original text hints that Danny could be Azor Ahai reborn. Danny and Jon are definitely the frontrunners at this point – or perhaps somehow both of them together will fulfill the prophecy.

We also saw two other major characters meet for the first time – Jorah and Sam. Jorah is clearly not doing well, but Sam may just be able to save him (if he doesn’t give himself greyscale in the process). Watching Sam cut off the affected skin was so gross, but I found the whole thing very touching. Also, Sam’s need to save Jorah makes total sense once he finds out he’s a Mormont.

While other characters were meeting for the first time, Arya had two notable reunions this episode. First, she saw Hotpie, who seems to be doing well. He also was able to give her a key piece of information – that Jon is now King of the North. That convinces her to change her course, hopefully setting her up for another big reunion.

Later in the episode, she reencounters her direwolf Nymeria. However, Nymeria seems to have made new friends and built a new life in the wild and, while she doesn’t eat Arya, she doesn’t follow her back to Winterfell either. (I’m hopeful that she may reappear at Arya’s side somewhere down the line though.) There’s obviously a lot of symbolic significance we can attempt to extract from that scene, but just on a visceral level, I found it incredibly compelling.

The episode concluded with a convergence of various characters at sea, which I enjoyed less than the other character meet ups that preceded it. Euron “Evil Pacey” Greyjoy and his merry band of pirates boarded Yara’s ship and started slaughtering everyone. It should have felt like a big moment, but I was distracted by how drastically different it looked and felt stylistically. It felt like we abruptly were thrown into a low-budget Zack Snyder knockoff where the director just kept telling the actor who plays Euron to “go bigger.” Making it so over-the-top made me less emotionally-invested in what was happening, which is a shame since I liked Theon’s moment of cowardice in theory and wish it had felt a little more grounded.

Overall though, I love that we are getting new combinations of characters and am even more excited for the character meet ups to come. 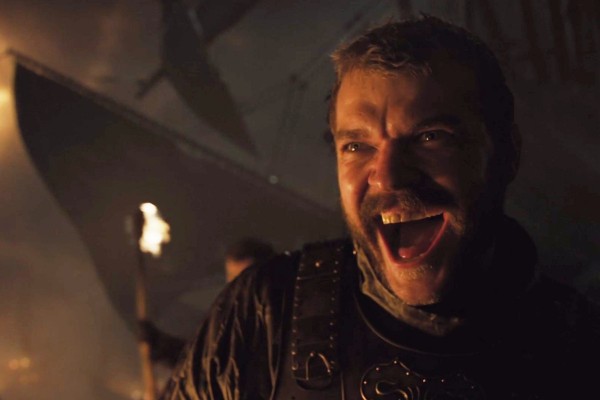