There have been many, many notable character deaths on Game of Thrones, but Olenna Tyrell’s is easily one of my favorites. It was the perfect sendoff for the character – feeling both dignified and tragic all at once. And I loved her getting one last victory in death as she waited until after she drank the poison to look Jaime in the eyes and tell him she was responsible for poisoning Joffrey.

The scene was the culmination of an episode where Jaime’s capacity for shame and remorse kept him from excelling at “the game,” even as he racked up a major military victory. Earlier in the episode, we see him almost lose it when Euron “Evil Pacey” Greyjoy asks for advice on how to please his sister sexually. Then, still reeling from that, he attempts to shut down Cersi’s advances, but ultimately gives in, only to have her flaunting their affair to any passersby in the Red Keep. And finally, after an effortless victory over House Tyrell at Highgarden, he offers Olenna a painless death (after rejecting Cersi’s pitches for something more ghoulish), only to have Olenna’s final words crush him.

Jaime is an amazing soldier, but he’s not cut out for the game. He doesn’t have the temperament for it. Deep down, I don’t think he’s a bad person. He befriended Brienne and freed Tyrion. He sullied his own reputation by participating in “Robert’s Rebellion,” which earned him the label of “Kingslayer,” but in doing so, he saved the realm from the “Mad King.”

He continues to try to act with honor and to give his enemies respect, but that isn’t the world he’s living in. Jaime seems to believe that if he does the wrong things for the right reasons, that it will be okay. That’s clear in his speech to Olenna, where he tells her that once all of their enemies are vanquished and peace has been restored, the citizens of Westeros will love Cersi and forget about her transgressions. He can’t see that he’s basically helping to keep the “Mad Queen” on the throne. I actually feel sorry for him, which is pretty remarkable considering the series opened with him pushing Bran Stark out of a window.

Cersi, of course, has gone full Bond villain. Blowing up the sept was horrific, but it was an act of desperation. But once that move allowed her to claim the Iron Throne, she’s become sadistic, torturing her enemies before killing them in ways that even Joffrey couldn’t have dreamed up. For all we know, “Shame Nun” Unella is still in the dungeon being raped and abused by the Mountain. And now, Ellaria Sand is chained up there as well, forced to watch her daughter slowly die, then decompose in front of her.

Cersi’s parallels to the “Mad King” Aerys Targaryen are fascinating, especially with Danny being in a position to lead a rebellion and Jaime once again in a position to help overthrown the tyrannt from the inside. But, for now at least, things are looking bleak for Danny as the Lannisters continue to outmaneuver her forces. The Sand Snakes and Tyrells have been defeated and the Dothraki and Unsullied troops are at Casterly Rock, which Jaime was perfectly willing to hand over as a distraction (a plan he stole from the Starks, who did it to him). What seemed like certain victory now is a lot more up in the air after two major setbacks.

Making matters worse is just how terribly Danny handled her meeting with Jon Snow. The first meeting of these two felt like it should have been a monumental occasion, but Danny decided to try to intimidate him instead of acting diplomatically, which is the exact wrong tactic. She insults his father and demands immediate loyalty without even bothering to make a case for why he should follow her, except that his ancestors bent the knee to hers.

It made her seem petty and small and made me question whether or not she had the temperment to lead. She’s a great warrior who excels at conquering regions, but she’s yet to prove she can actually rule any region that she conquers. Tyrion does a great job as an intermediary between the two, but I found the opening scene incredibly frustrating. I was hoping for more from Danny. 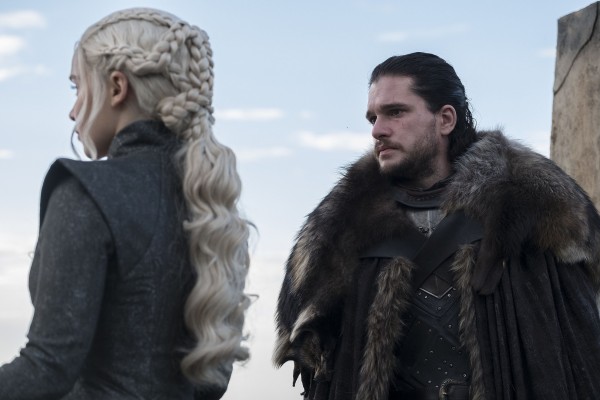