They may not have been that convincing to the home viewer, but apparently Jon Snow’s “discovered” Dragonstone cave paintings last week had quite an effect on Daenerys. After initially dismissing Jon’s stories about White Walkers as crazed nonsense, she is apparently willing to put her lifelong quest to retake Westros on hold in favor of a convoluted back channel negotiation with Cersi to address the threat to the north.

The plan to kidnap a White Walker and show it to Cersi is baffling enough, but it seems completely out of character for Dany to sign off on it. She just scored a major military victory over Cersi. The Lannisters are reeling. She starts off this episode by burning Randyll and Dickon Tarly alive for not bending the knee. Tyrion attempts to talk her out of this action, but she is steadfast in her belief that they must die for opposing her. Then, moments later, Jon pets her dragon and she’s suddenly willing to postpone her mission to follow the whims of this Northern king who refuses to bend the knee? It makes absolutely zero sense to me. It feels like the writers started with a destination they wanted these characters to end up at and worked backwards and they didn’t care if they had to sell out Dany to get there. It was a frustrating series of events.

In addition to wanting to get Jon and his band of misfits past the wall and battling White Walkers in time for the season finale, it seems like this labyrinthine plan was also set into motion to get Tyrion and Jaime face to face to talk truce. While I enjoyed their scene together, this also felt forced and nonsensical. We find out that Cersi knew about this meeting and allowed it to happen because she’s planning to use it to her advantage. Which is exactly what Cersi should do. It seems odd that this doesn’t occur to Tyrion as a possible outcome. She blew up most of her enemies in the sept last season – gathering them all in one enclosed space and setting off a powerful explosive to wipe them off the planet. She’s hopelessly outmatched by Dany’s army, so an opportunity to execute Daenerys, Tyrion and their inner circle in one shot is a gift from the gods.

What is particularly maddening is that the writers could have had these two moments in a way that made more sense. Jon could be going past the Wall to bring her back a White Walker to prove they’re real instead of proving it to Cersi. And Tyrion could have still secretly met with Jaime to broker a peace because he’s conflicted after watching the slaughter of the Lannister army last week and wants to find a peaceful resolution. We could have had the same outcomes without selling out Dany and without a convoluted plan to recruit Cersi to this mission. 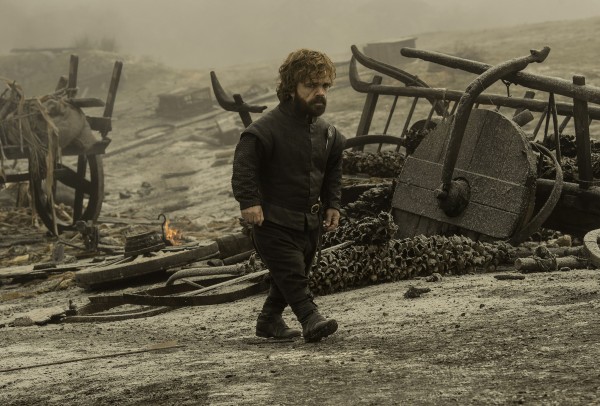 While I found the overall arc of this episode incredibly frustrating, I liked a lot of the things happening on the fringes.

I most enjoyed the scene between Sam and Gilly. It was nice just seeing them together in a shared space as they are consistently the most delightful couple on the show. The scene also contained a huge reveal that was completely missed by both characters. Gilly is reading the copious notes of High Septon Maynard and discovers that he annulled Rhaegar Targaryen’s first marriage so he could secretly marry someone else. Sam misses this completely (not that he would have any reason to catch it since only Bran knows the truth at this point), but it seems to hint that Rhaegar secretly married Lyanna Stark. That would mean that Jon Snow is not only not a bastard, he’s a Targaryen with a better claim to the Iron Throne than Dany.

I also enjoyed Arya and Littlefinger’s game of cat and mouse. Watching Arya out-creep Littlefinger in the shadows really amused me. But, of course, he got the last shadow creep, as it turned out he wanted her to sneak into his room to find that scroll. It seems he has the upper hand at the moment, but I hope that doesn’t last long. (I’d also be totally cool if Arya just unceremoniously slit his throat at some point.)

In case you were wondering, this is what the scroll said:

Robb, I write to you with a heavy heart. Our good king Robert is dead, killed from wounds he took in a boar hunt. Father has been charged with treason. He conspired with Robert’s brothers against my beloved Joffrey and tried to steal his throne. The Lannisters are treating me very well and provide me with every comfort. I beg you: come to King’s Landing, swear fealty to King Joffrey and prevent any strife between the great houses of Lannister and Stark.

Sansa was forced to write it under duress in season one of the show. Littlefinger was in the room when she wrote it. It seems he wants Arya to find it in order to create conflict between the two sisters. It’s a clever plan, but thinking back on their relationship in season one, he probably could have just waited a few weeks for them to start arguing on their own.

I also enjoyed Gendry being brought back and joining Jon Snow’s band of misfits. He’s a great character that I didn’t expect to see again and I’m excited to see him back in the mix.

Still, overall I found this episode to be really frustrating. It felt like a lot of shortcuts were made to get the characters where they wanted them to be for the season finale, which felt really forced and inorganic. The plan to show Cersi White Walkers makes absolutely no sense to me and seems destined to lead Dany’s crew into a trap. A lot of people are making a lot of perplexing decisions to get the show to a point it wants to reach. 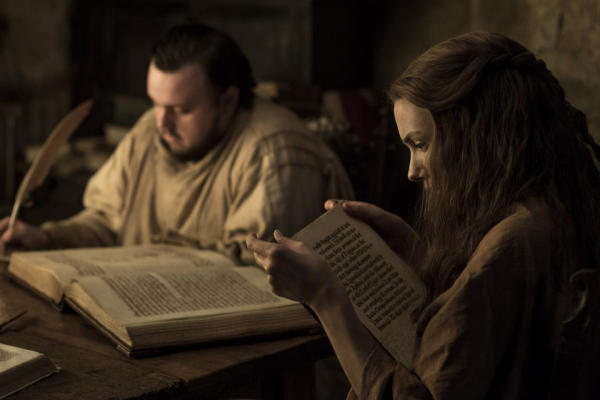