It wasn’t terrible. It wasn’t amazing. It was just fine.

Justice League never reaches the highs of Wonder Woman, but it also never reaches the lows of Batman v. Superman. It’s a very watchable film with a handful of delightful moments, though it ‘s likely to ultimately be forgotten in the sea of modern superhero films. But by not being openly terrible, it may be a step in the right direction for the DC Extended Universe and may finally give the franchise a solid foundation to build upon.

The film picks up where Batman v. Superman left off. Superman (Henry Cavill) is dead. Batman (Ben Affleck) and Wonder Woman (Gal Gadot) recruit a team of heroes to protect the world in Superman’s absence. Batman, making the bizarre choice to forgo the whole “secret identity” thing and just openly approach them as Bruce Wayne, tracks down Aquaman (Jason Momoa) and The Flash (Ezra Miller). Cyborg (Ray Fisher) just kind of shows up before they have a chance to track him down.

The film struggles to make these characters resonate. Miller’s The Flash, who is presented as socially awkward and snarky, is easily the most charismatic and interesting. Gadot’s Wonder Woman, who shined as a compassionate, but fierce warrior in her standalone film, is completely lost in the ensemble. Affleck’s Batman comes across as bland and forgettable. Momoa makes some fascinating choices as Aquaman – a character who has mostly been seen as a joke in previous iterations – but he’s mostly reduced to spouting lame catchphrases like “My man!” and acting generically bro-y. Fisher’s Cyborg is given very little chance to shine and the character’s CGI is distractingly bad. 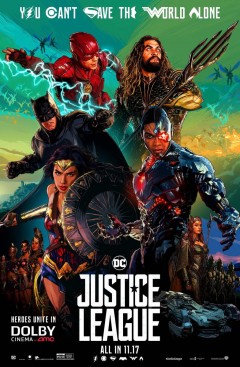 Speaking of bad CGI, the film’s villain is quite underwhelming. Steppenwolf (Ciarán Hinds) seems to lack any distinguishable personality. Instead, he exists simply as an one-dimensional obstacle for our heroes to overcome. His “master plan” consists of taking three magical cubes (called “mother boxes,” a term that caused my fiancé to snicker every time it was uttered) and putting them together. That’s it, just putting three cubes side by side, which will destroy the earth, apparently.

Watching the film, you can feel the two director’s disparate styles at war with one another. Snyder’s overly-saturated, nihilistic warmongering heroes don’t mesh well with Whedon’s brighter, more lighthearted ones. If either director had been in control of the project from start to finish, the film would have had a much more consistent tone. But, as is, there’s a lot of dry, overly-serious scenes that are punctuated with snappy one-liners (that are often times delivered off-camera, meaning Whedon likely had the actors record these funny lines during post-production). This abrupt tonal shift can feel quite jarring, like when The Flash (Ezra Miller) derails a serious conversation about the fate of the world to rant about not understanding brunch.

While I prefer Whedon’s style overall, Snyder knows how to stage compelling fight sequences. (The one redeeming moment in Batman v. Superman was the titular showdown.) Justice League has a really great battle sequence – which features the return of a familiar face and great use of The Flash’s power – but it is over far too quickly. The climactic battle is far less compelling.

One element I really enjoyed was the music. Danny Elfman composed the score and he manages to sneak in classic themes, including his own iconic Batman theme from the 1989 film. His score helps to build tension and sell the action sequences. The film also uses a wonderfully haunting cover of Leonard Cohen’s “Everybody Knows” (performed by Sigrid) to show how dark the world has become without Superman in it.

Still, while there were elements that I enjoyed, overall the film was underwhelming. It is by no means unwatchable, but it isn’t great either. It’s fine. Just fine. 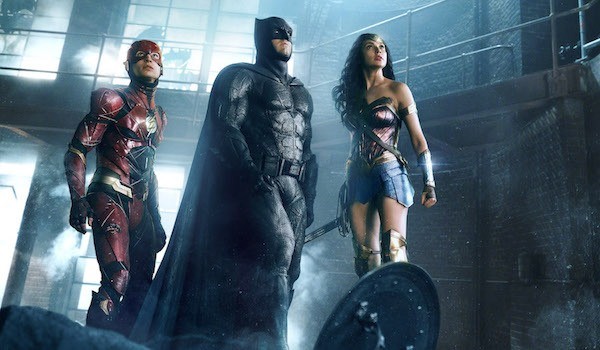