“And when you pray, do not be like the hypocrites, for they love to pray standing in the synagogues and on the street corners to be seen by others. Truly I tell you, they have received their reward in full. But when you pray, go into your room, close the door and pray to your Father, who is unseen. Then your Father, who sees what is done in secret, will reward you.”

A religious man looked out his window and saw rising floodwaters. He climbed up to the roof of his house and prayed for God to rescue him.

In time, his neighbor came by in a canoe and offered to paddle the man to safety. The man declined, telling his neighbor: “I’ve prayed to God and he will save me.”

The waters continued to rise. Then, two men came by in a rescue boat, offering to take the man to safety. Again, he declined the offer, telling the men: “I’ve prayed to God and he will save me.”

The water was getting close to the roof when a rescue helicopter spotted the man. It hovered overhead, dropping its ladder down. The rescue workers inside pleaded with the man to grab onto the ladder so they could pull him to safety, but he refused.

He shouted up to the rescue workers: “I’ve prayed to God and he will save me.”

The floodwaters reached the roof. The man was swept underwater and drowned.

When he arrived in Heaven, he sought an audience with the Lord. Standing before God, the man asked, “Why am I here in Heaven? I prayed for your divine intervention to save me from the flood.”

God replied, “I heard your prayers, my child. And I sent you a canoe, a boat and a helicopter.”

For too long, politicians across this country have been that man. Whenever a mass shooting occurs, our elected officials rush to Twitter to share their “thoughts and prayers” with those affected:

My prayers and condolences to the families of the victims of the terrible Florida shooting. No child, teacher or anyone else should ever feel unsafe in an American school.

My thoughts and prayers are with the 6 police officers shot last night in PA and FL. https://t.co/cWVFtPAAHZ

Saddened by the deadly shooting in Virginia this morning. My thoughts and prayers are with the family and friends of the victims.

These politicians seem to think that the only way to stop mass shootings is to just pray to God and wait for him to smite all of the guns with his laser beam eyes (or however it is that Republicans think God functions). But, it’s safe to say that this approach hasn’t worked thus far, judging from the, as The Washington Post tallies it, “more than 150,000 students attending at least 170 primary or secondary schools [who] have experienced a shooting on campus since the Columbine High School massacre in 1999.”

There is, of course, a lot they could do beyond sending hollow thoughts and prayers. They are public servants, after all, who have been empowered by their constituents to enact laws to keep us all safe. But they shrug and sit on their roofs as the floodwaters rise, waiting for diving intervention instead of enacting real change.

Much of this is due to the NRA’s masterful reframing of the gun debate. The National Rifle Association, which was once a humble club for gun enthusiasts, rebranded itself in 1977 as a far-right Republican lobbying group. Along with this new agenda, the group sought to reinterpret the Second Amendment in order to use it to weaken gun restrictions.

As this New Yorker article explains:

The re-interpretation of the Second Amendment was an elaborate and brilliantly executed political operation, inside and outside of government. Ronald Reagan’s election in 1980 brought a gun-rights enthusiast to the White House. At the same time, Orrin Hatch, the Utah Republican, became chairman of an important subcommittee of the Senate Judiciary Committee, and he commissioned a report that claimed to find “clear—and long lost—proof that the second amendment to our Constitution was intended as an individual right of the American citizen to keep and carry arms in a peaceful manner, for protection of himself, his family, and his freedoms.” The NRA began commissioning academic studies aimed at proving the same conclusion. An outré constitutional theory, rejected even by the establishment of the Republican Party, evolved, through brute political force, into the conservative conventional wisdom.

To continue my analogy, this re-interpretation of the Second Amendment is what caused the floodwaters to rise. Since this shift in the 1980s, gun laws and restrictions have been slowly eroded, offering average citizens more access to more powerful weapons, which has resulted in more frequent, deadlier mass shootings.

Fast forward to today, where the NRA’s version of the Second Amendment is so firmly entrenched in the public’s consciousness that we all just accept that the vaguely-written amendment guarantees Americans unfettered access to high-powered assault weapons. These politicians pretend like there’s nothing that can be done, when that obviously couldn’t be further from the truth. While they attempt to shift the blame to mental health or movies and video games, or offer asinine suggestions like arming our teachers, the truth is, God continues to offer them lifelines to pull us all out of this gun epidemic.

Our politicians have ignored the canoe and rescue boat, but the floodwaters are reaching our nation’s roof and it seems like God has provided us all with a rescue chopper.

That rescue helicopter? The brave, outspoken students of Marjory Stoneman Douglas High School in South Florida. They’ve done something amazing and unprecedented. After being victims of an unimaginable tragedy that saw 17 of their classmates and faculty lose their lives to a lone gunman, they are speaking out against the apathy of our elected officials and are calling for real change. Emma González and her fellow students have managed to keep this story in the public’s eye and, for the first time in a long time, have made real change feel possible.

The helicopter is hovering over the roof. The ladder has been dropped. Our “thoughts and prayers” politicians may be willing to be swept underwater, but God is offering the rest of us one last lifeline. I, for one, hope we finally take it. 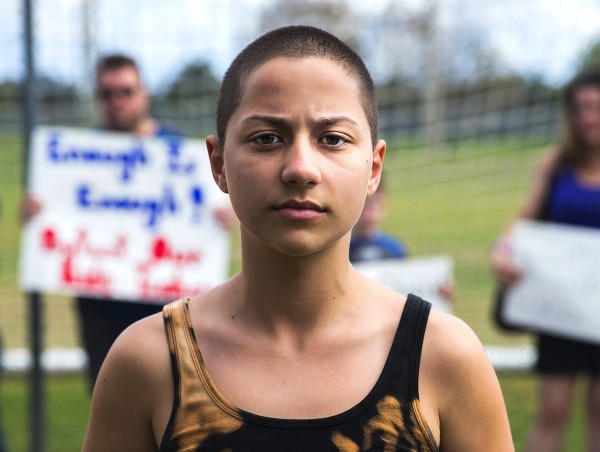