Infinity War captures the feel of those massive comic book crossover events that unfold across multiple issues of multiple titles. Having watched these heroes’ individual stories unfold, seeing The Avengers and Guardians of the Galaxy meet for the first time feels epic. With 10 years of history with these characters, the strong emotional bond I have to them adds massive stakes to their battle to save the universe from Thanos (Josh Brolin). And, perhaps most impressively, after 19 films in the Marvel Cinematic Universe, directors Anthony and Joe Russo managed to make the threat feel larger and more perilous than ever before.

There’s a moment in the film where Thor (Chris Hemsworth) is telling Rocket (Bradley Cooper) that, after over a thousand years of existence and several thousand epic battles, he’s convinced fate has kept him alive in order to defeat Thanos. Rocket asks Thor if he’s considered that he could be wrong; that this time he’ll lose. This possibility rattles Thor. It’s one he can’t bear to contemplate. But it is the central question at the heart of Infinity War: victory has always been a foregone conclusion, but what if this time our heroes are finally outmatched?

The plot is fairly straightforward. Thanos, the puppet master behind the events in The Avengers and father to Guardians of the Galaxy’s Gamora (Zoe Saldana) and Nebula (Karen Gillan) is traveling around the universe searching for six Infinity Stones, which, when wielded together, will allow him to wipe out half of all planets’ populations; a move he believes will save civilizations from overpopulation and the depletion of natural resources. Two of the stones are on Earth. The rest are spread across the galaxy. Our various heroes must team up in order to keep Thanos from acquiring all six stones. However, each stone he acquires makes him exponentially more powerful.

The Russos proved in Captain America: Civil War that they are adept at handling larger ensemble films with epic battle sequences where the individual characters aren’t lost in the shuffle. Infinity War is a much more ambitious undertaking, but once again they expertly interweave the various characters and plotlines.

Most impressively, the characters’ individual voices are kept intact. One thing that always bothered me about The Avengers is that Joss Whedon had all of the characters firing off Tony Stark-esque (Robert Downey, Jr.) zingers. But, in this film, Tony Stark’s humor feels different from Peter Parker’s (Tom Holland) or Peter Quill’s (Chris Pratt) or Dr. Strange’s (Benedict Cumberbatch). There is also new comedic gold to be mined from the pairings of characters who have never met before, like Starlord and Thor. 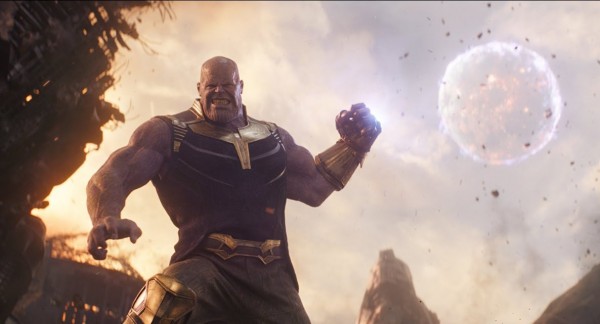 The characters’ motivations also all feel quite different as well. For Gamora and Drax (Dave Bautista), this is personal. Dr. Strange is primarily concerned with protecting the Time Stone, which he discovered and swore to protect in his standalone film. Vision (Paul Bettany) has the Mind Stone embedded in his forehead and is wrestling with the idea of destroying it (and himself in the process) in order to keep Thanos from obtaining it. The other heroes have less personal stakes, but are still motivated to save the universe.

The action scenes are all expertly shot and are fun to watch unfold. The battle at Wakanda, in particular, is a joy to watch. But all of the action scenes feel unique, visceral and satisfying.

The CGI, for the most part, is also well done. Thanos looks great. The various cosmic locales are vibrant and distinct. Elements like Dr. Strange’s cape or Iron Man’s suits are seamlessly woven into the film.

The one notable exception is Thanos’ loyal soldier, Proxima Midnight (Carrie Coon). Proxima Midnight is rendered surprisingly flat and lifelessly. She looks out of place in this film – like a rushed NPC from a video game that wandered into the movie. What’s baffling is there seems to be no reason the character couldn’t have just been played by a live action actor in pale blue makeup.

There are a few other minor quibbles I have with the film, but they are difficult to discuss without delving into spoilers. It also feels fair to warn you that some of you may find Infinity War’s dark tone off-putting; though personally I enjoyed it (and thought it was balanced by the genuine humor in the film).

Overall, I’m incredibly impressed by this ambitious, epic sage. If Marvel can continue to deliver at this level, I don’t think any of us will be feeling “Avenger fatigue” for a very long time.