It was on this day 13 years ago that HoboTrashcan was formed.

The site has changed a lot over the years – both aesthetically and content-wise – but we’ve always aimed to give you thoughtful, unique pop culture content.

To celebrate lucky number 13, we thought it would be fun to take a look back at some of the content that appeared on the site the day we launched.

Below are three of the first posts that ever appeared on HoboTrashcan, with the original preview text that appeared on our splash page.

You can also see what the site originally looked like in the screengrab below:

Michael K. Williams interview
In part one of this candid interview, the man who plays Omar on The Wire talks about his past and answers the question – Is Tupac still alive?

Murphy’s Law – The business of being cool
Joel Murphy knows a thing or two about being cool (or at least, he thinks he does) and he believes that society as a whole just isn’t as cool as it used to be. Has everyone given up on trying to be hip? Is everyone embracing their inner nerd? Murphy takes a look at some of today’s biggest trends and tries to find out.

Totally Wasted – The history of film
Every column written by Amber will be a drunk diary. You can read along as her night progresses and she gets Totally Wasted. It’s drunk dialing, HoboTrashcan-style. This week, Amber celebrates her sister’s birthday in style and educates us all on the history of film. Her boyfriend, Gary, even makes a guest appearance. 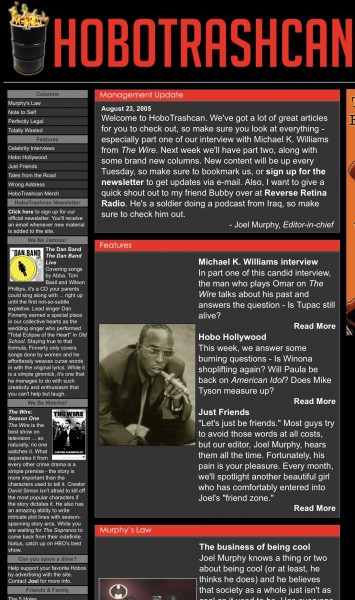