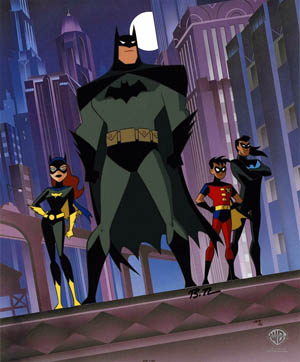 Most kids secretly dream of being Batman, so its ironic that the man who played the Dark Knight for the past 18 years grew up having no clue who Batman was.

Still, it seems like a role Kevin Conroy was destined to play. Like Bruce Wayne, Conroy’s unique childhood left him feeling isolated from his peers until he found his true calling and got his life back on track.

For Conroy, that calling was acting. He graduated from Juilliard and pursued a career in theatre and television before landing the role of Batman on Batman: The Animated Series. Since then, he has played the character in a variety of television shows, video games and movies, including the recently released Batman: Arkham Asylum and Superman/Batman: Public Enemies.

We recently talked to Conroy about the Caped Crusader, Mark Hamill and Christian Bale’s ill-advised Batman voice. This week, we bring you audio highlights from that interview. You can find the full interview here: http://www.hobotrashcan.com/2009/10/01/one-on-one-with-kevin-conroy/