As many of you know, I recently relocated to Baltimore, Maryland. Now that I’ve been here a few weeks, one thing I’m itching to do is to find out how to get invited to local movie screenings. In an effort to expand HoboTrashcan’s movie coverage, I’m trying to figure out who I need to contact to be part of the “in-crowd.”

Yesterday, I reached out to a number of different people in the area to see if they had any advice. One of the people I contacted was Roger Moore, a film critic who has his reviews published in the Baltimore Sun. This turned out to be a mistake for several reasons: a) Moore actually writes for the Orlando Sentinel and simply has his work syndicated in the Sun and 2) Moore is a pretentious douche who apparently has enough time on his hands to send dickish email responses to bloggers.

So a few hours after I sent my brief, polite email off to Moore, I got this pleasant response:

Joel;
Congrats on your blog, alas, I am syndicated out of Orlando, so I couldn’t help you even were I so inclined. Corporate policy also forbids it.
FYI, here’s the way those of us who do this for a living read inquiries like yours.
“Hey, I know you’re putting kids through college and all, and your pay is dependent on print work and web traffic to your reviews and your access to studio people, movie stars and all.
“But I would really like to take traffic away and maybe get your kids sent to a state school instead of Duke, which is your goal.
“So why don’t you forget how many years it took you to get that info and access and just give it to me so I can draw eyeballs away from your work right this sec, and just because I am an eager amateur and I want it? What say?”
My version reads funnier. To me anyway.
Just helping you out, pal. 😉
RM

I like to picture Moore kicking a puppy while typing this email. Picturing him shoving a little girl down and stealing her ice cream cone works too. But most likely, he simply practiced mean faces in the mirror for 20 minutes, wiped a tear from his eye and then fired off this angry missive.

I enjoy the ironic use of the word pal. And the winky, smiley face is a nice touch too; it lets me know that while Moore may look down on bloggers, he still understands Internet culture.

As much as I want to simply mock this email (especially the part where he writes the incoherent sentence: “What say?” Where’s a good editor when you need one?), I can’t help but feel like these are the sad words of a bitter, broken man who is scared by the ever-changing world around him. To mock him would be to mock the old man wandering aimlessly through the Safeway in a bathrobe, shouting about the ever-rising cost of peas.

Clearly, in his mind I’m a threat to him, as are all bloggers. Of course, what he fails to realize is that people will inevitable flock to the writers they like. I have no nefarious plan to “take traffic away” from Moore. I happen to think there’s enough room for both of us out there. If people choose to read my site instead of reading his reviews, it won’t be because of cheap tricks or evil intentions on my part. It will be because I’m a good writer and he’s a guy who gave Transformers: Dark of the Moon 2.5 out of 4 stars, the same rating he gave to Harry Potter and the Deathly Hallows: Part 2. (He gave 3 stars to Cars 2.)

He’s lashing out at me because the industry he loves is dying. I understand that pain because I love the industry too. I thought I wanted to write for a newspaper – hell, I even worked for one right out of high school – but I long ago realized that the newspaper business was a sinking ship. It’s not my fault that newspapers are dying; it’s the fault of Moore’s bosses, the guys who didn’t react quickly enough to the changing landscape.

If newspapers had long ago set up a feasible pay structure online, it would have saved them. With the emergence of new technology like iPads and Kindles, the online subscription business should be booming right now. But newspapers can’t offer profitable online subscriptions now because they have been giving away their content for free for all these years. Besides, their bullpens are so gutted these days that they don’t really have enough writers to put out the kind of quality local coverage that would justify the subscription costs.

Moore has watched the industry he loves crumble around him. He’s seen friends lose jobs. He’s been forced to start his own blog on the Orlando Sentinel website, something that must just kill him inside. Clearly, all of it has taken its toll on him, turning him into an insufferable douche. Sure, he’s one of the lucky ones who still gets paid a yearly salary to bitch about movies he watches for free, but that doesn’t mean he’s not still worried about the future.

To put it in terms film critics will understand: newspaper movie reviews are like silent films and the Internet is akin to “talkies.” Roger Moore know he’s John Gilbert and its only a matter of time before the world has completely passed him by.

But while he fears the Internet, I find it to be a beautiful thing. It’s like the wild west (sorry to mix my metaphors here). It gives everyone a chance to succeed. And some lucky newspaper critics will be able to make the leap to this new medium, becoming the Greta Garbos, Joan Crawfords and Lillian Gishes of their time.

I’m never going to get a job writing reviews for a newspaper; those jobs are all taken by a few lucky syndicated guys like Roger Moore (and clearly he is clinging onto his position with everything he’s got). Newspapers can only offer work to a select few who have been grandfathered in, but the Internet is a free market where anyone with talent can succeed.

What pisses me off the most about Moore’s email is there’s an assumption that he deserves to be a movie critic and I don’t. What scares him, I think, is that deep down he realizes the Internet is a game changer that rewards great writers who have simply been waiting for all these years for an outlet to showcase it. Now the audience gets to decide who succeeds and who fails, not a newspaper editor.

I’ve run this site since 2005. I’ve put a lot of hard work into it, building up relationships and “paying my dues,” as it were. Writing online is my only viable option if I want to write about this stuff, so I take my work here seriously. I’m not asking for handouts. I’m busting my ass and learning everything I can to try to make the most of this platform.

Roger Moore paid his dues, I’m sure. But along the way, I’m also sure he had help. People took him under their wing or offered him advice. His success is his own and I’ll assume earned, but he didn’t do it alone. He had colleagues and editors around him helping him along the way.

That’s why I naively thought that reaching out to other people in the field would yield positive results. After all, I’m perfectly willing to help anyone who emails me asking how I got the celebrity interviews, DVDs/Blu-rays I’ve reviewed or the TV screeners I’ve been sent. I’m confident in my work. I don’t worry about the next guy coming along and getting more hits than me. I know that if someone I help succeeds, its a good thing because it means that somewhere down the line he/she might be able to return the favor by posting a link and throwing some traffic back my way.

I guess I’m an optimist. Roger Moore is clearly a pessimist. So much so that he actually wrote this on his blog back in 2006:

It’s a great job, as anybody who meets you is quick to tell you. But as professional movie reviewing fades away and we all think long and hard about our fallback careers (or live in denial), my advice to every kid who emails from high school, or calls from college, or who angles into doing unpaid reviews for this website or that college paper, is the same.

Don’t even start. Don’t try this at home. It’ll break your heart.

But of course that’s what he’d say. The guy is clearly terrified of anyone coming along who is better than him at his job.

Moore didn’t have to help me. He had no obligation to, obviously. But he could have just ignored my email or stuck with the “Corporate policy … forbids it” line. Instead he decided to be petty and sarcastic to make him feel better about his sad, empty life.

So fuck you, Roger Moore. I look forward to me and my Internet brethren putting you out of business, pal. 😉 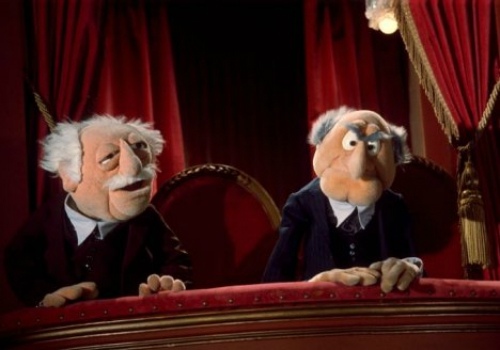