At the heart of Battleship, there is an epic war waging – and no, I’m not referring to the film’s central battle between the Navy and a group of sea-dwelling aliens. The real battle taking place features director Peter Berg, the creative force behind both the film and TV adaptations of Friday Night Lights, and his struggle to make an engaging and entertaining popcorn flick while handicapped by a ridiculous premise and an ulterior motive to sell board games.

I’m sad to say that Berg loses the fight. And he loses it quite badly.

Battleship, by any measurable standard, is a terrible film. The plot in general is one you’ve seen thousands of times before. Lieutenant Alex Hopper (Taylor Kitsch) is a screw up with a heart of gold and tons of untapped potential who is about to wash out of the military. Further complicating things is the fact that he’s in love with Samantha Shane (Brooklyn Decker), whose father just so happens to be the powerful and intimidating Admiral Shane (Liam Neeson), the guy looking to boot him out of the Navy. Through a set of incredibly contrived circumstances, Hopper is put in charge of a ship and forced into action against the alien spacecrafts and, lo and behold, it turns out that maybe he’s not such a screw up after all.

And when I say contrived circumstances, I mean contrived. The whole thing needs to take place in the water for the entire Battleship concept to work, so for reasons never truly explained the aliens hunker down in the ocean. The alien craft creates a force field that traps three ships inside with the aliens and everyone else, like Admiral Shane, stuck on the outside powerless to interfere. This keeps airplanes from getting involved in the firefight, since this is Battleship, not Top Gun, and it keeps Hopper in charge, since no higher ups can come in and relieve him of his duty.

If that wasn’t hokey and forced enough, the primary objective of this film still has to be to sell board games, so Berg is also forced to shoehorn in references to a really boring game involving immobile ships and little red and white pegs. So there is a very contrived sequence in the film where Hopper and his crew literally pull up a black and green grid and launch torpedos at random coordinates attempting to blow up the alien craft.

Further complicating things is the fact that the Navy no longer uses battleships in combat. Instead, they now use destroyers. But you can’t really call a movie battleship and not have at least one battleship in it, so the film must further contort itself and come up with even more ridiculous circumstances to allow Hopper and his crew to actually use a battleship to take on the extraterrestrials. I don’t expect much realism in a film involving force field-wielding aliens, but everything about the battleship sequence is so utterly unbelievable and nonsensical that I actually find it hard to believe someone was paid to write it. 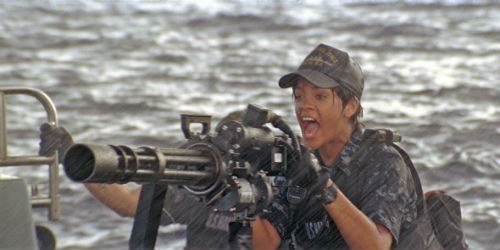 Plot holes and sloppy writing abound. During the film’s best moments, it’s just a loud, forgettable action movie. And during its worst, it seems to be actively trying to make you hate it. It’s hard to believe anyone thought this movie was a good idea to begin with, but the fact that it got made with such a poorly-written and poorly-conceived script blows my mind.

Making matters worse, the special effects all seem cheap and rushed and the performances by and large are quite lackluster. Liam Neeson is quite enjoyable, but he barely has enough screen time to make much of an impact on the film. Same goes for Alexander Skarsgård, who plays Hopper’s brother (despite the fact that he’s about a foot taller than Kitsch). Rhianna and Brooklyn Decker both come across rather wooden on screen. Taylor Kitsch is actually good in the central role and he definitely has the chops to be a lead actor, though he’s having a rough summer with this film and the colossal financial flop that was John Carter.

Battleship was a blatant money grab film designed to help sell board games. But in the end, it’s not even as exciting as the game its based on, which is one of the dullest and least strategic games ever created. I can only hope this movie tanks horribly to discourage Hollywood from making such a lazy and greedy film like this again. 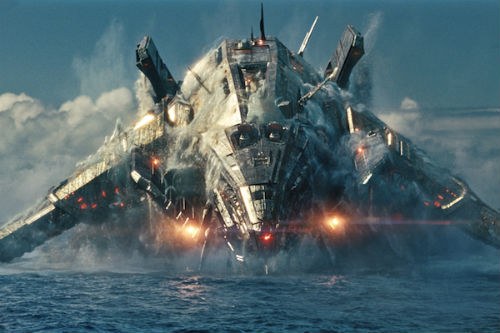