Last summer I explained why bashing the family reunion can be overrated, especially when your in-laws’ reunion takes place in the hills of West Virginia. (As opposed to the plains of West Virginia? Nice redundancy, Bitters.) I went back for the 32nd edition of this annual hoopie-fest. This was perhaps my 12th appearance at the gala that keeps on giving. Here are a few of this year’s highlights.

Temperature at game time for part one of this shindig on Friday evening was a miserable 97 degrees. A frazzled mother had just spent over ten minutes holding her screaming, crying three-year-old son Jackson. The kid finally ended his conniption and was soon off playing with other kids. The mother, still sweating and reeling from the episode, sat down next to me with a plate of food, went to begin eating, and said, “Oh shit. I had a fork, but I don’t know what happened to it.” After a pause, she said, as if regretting not doing what she apparently fantasized about for the past ten minutes, “Maybe I left it in Jackson’s thigh.”

I was one of the first arrivals that night, and as soon as I parked the car I cracked open a beer and started walking across the huge yard, which was littered with all kinds of balls and games for the kids, the purpose of which was to keep them entertained so that the adults could start getting plowed.

I gently – or so I thought – kicked a miniature soccer ball. It began rolling. And rolling. And rolling … all the way across the yard and down a steep hill and into a creek. No adult saw this, thank god. However, four little kids who were trying to play badminton did. They came running over, watched the ball make its sad journey across the stream, then looked up at me in unison with a group expression that said, “You are either the world’s biggest dumbass or its most mean-spirited prick.”

I just took a swing of Bud Lite and said, “Sorry. The grass is cut too low, like when a groundskeeper wants to speed up an infield.” You know, as if five-year-olds understand what the fuck I was talking about.

For the rest of the night, every time a new kid would spot the ball across the creek, I’d see him run to some other kids and ask about it. They’d point at me across the new-mown expanse, say something to the kid and then they’d all stare at me for a few seconds before they resumed playing. (What were they playing? Not soccer, thanks to me.) You know your life is in a bad place when five-year-olds look at you not with anger, puzzlement or curiosity. No, they had nothing but pity in their eyes.

The next day was another scorcher, but thanks to calming, cooling powers of Bud and Miller Lite, everyone was somehow enjoying the day. People sat under tents, drank, moved as little as possible and generally enjoyed what once again was turning out to be the most laid-back, relaxing day of the summer.

And then SHE took over. I’m referring to a late 40ish member of the New Jersey contingent, a ballbusting scold of a woman who shows up about every four years intent on seizing power and inflicting structure and Nazi-like obedience on the buzzed, laid-back masses.

Around 4, the major food spread was laid out, and this woman called – with a screech that could scare a herd of wildebeests – to all us famished reunioners to come gather round for the first-ever official blessing, which would be conducted by the visiting priest. Everyone began the trek toward the food, but because none of us are named Usain Bolt, our own Eva Braun grew impatient and began screaming for us to hurry our asses up. We gathered near the grub. She introduced said priest and thanked him for agreeing to do a blessing. She then asked us … okay, ordered us … to hold hands with our neighbors for this blessing.

At this point, this atheist had his non-believing world rocked, because at that moment some merciful, benevolent deity whipped up a nice gust of wind which toppled our tent, so instead of having to hold sweaty hands with a similarly uncomfortable reunioner, I seized upon the opportunity to play Tent Saver and ran over to attend to this vital matter with a couple of other quick thinking holding-hand-aphobes.

While everyone (except the four of us … whew) joined hands by order of the Blessing Nazi, it was time to hand over the official prayer duties to the priest, as he is, you know, a professional in such matters as thanking god and blessing the chicken and consecrating the coleslaw. Instead, she stunningly went right into her own blessing, which lasted roughly as long as Cecil B. DeMille’s The Ten Commandments.

While I was tending to the tent (as slowly as possible, so as to avoid the hand chain), and the priest stood idly by, his power of prayer usurped by the self-anointed lay minister, I actually heard the line, “… and forgive them lord, because there is going to be a lot of drinking of alcohol and gambling and …” After she listed 27 other possible sins that the good lord would need to get all merciful about, my somewhat homophobic brother-in-law, who had been grasping the calloused, very manly hands of two very male relatives, finally yelled out, “You DO know I’m holding hands with two dudes out here, right?” The nervous laughter finally spurred our prayer giver into (begrudgingly) wrapping up her pre-forgiveness pleas to the Almighty.

This control freak also muscled her way into running the big raffle giveaway in the early evening. She began this fun part of the evening by screaming at the assembled, ticket-wielding guests that it was “really hot out here so when your number is called get your butt up here fast and don’t be fooling around because we want to get this over with!” Because a fun prize give-away should always be hurried along, as who wants fun to last, right? When the first winner dawdled ever so slightly, he was subjected to a very public scolding from the sweaty Sataness, and thereafter the rest of us Usain Bolt-ed our way up to the prize area when called, even poor old Uncle Bert, a kindly septuagenarian who got called out by name, “C’mon Bert, faster! It’s hot as hell out here!” Fortunately, he did not suffer a heart attack or heat stroke, although I believe he did come down with an abiding hatred for the New Jersey Banshee, an affliction that was contagious, no doubt.

Perhaps the most bizarre moment of the day involved the aforementioned priest. After dinner he made his way over to my wife’s parents, whom he knows well. Since all of their kids and their kids’ spouses were sitting in the same circle, introductions ensued. This is Alan [Hello] … his wife Beth [Nice to meet you] … our daughter Mary and her husband Ned [Pleasure] … and my son Clint [Oh, you’re the one who lives near the Poconos, right?] … and his wife Estrella. And this is where it got weird.

See, Estrella has a black father and mother from Spain. Mix together and you have one pretty fine looking lady. Apparently, Father Blue Balls likes the ethnic look, for he blurted out lustily, “Oh! wow … I’d take you to the Poconos, too!” No one batted an eye at that point, but of course, by 11:00 that night we had drunkenly turned it into His Horniness saying, “Damn, youngun! Turn around and let me scope out that fine backpiece! Oh yeah, I’d be glad to give you the body of Christ, sweet thang!” Or variations thereof.

And finally, we have the potato gun segment of the day. Around 5:30 I heard this “poomf” sound and looked up near the lake to see about a dozen kids, three huge sacks of very edible potatoes and two big, black homemade potato guns. A steady firing of those potatoes into the stratosphere ensued. This looked like it might be fun for about the first four or five shots, as the space-bound spuds rocketed up until they were mere specks in the sky, then they’d hurl back toward the lake at frightening, meteoric speeds.

Which is why portly seven-year-old Carson decided that it would safe, challenging fun to run to the other side of the lake and try to catch these skull-crushing potatoes as they raced earthward. Fortunately, Carson’s father saw his son and screamed, “Carson, what the hell you doin’ over there?” Carson replied, “I’m tryin’ to catch the potatoes!” His father mystifyingly found this response satisfactory and paid the matter no more mind, allowed his son to continue his potentially lethal game of Tater Roulette.

After about a half an hour of shooting potatoes into the sky, the kids got bored and started walking away, because monotony soon won the day. Yet for another half an hour, one hearty soul remained on the hill, his steady, tuber barrage of the lake continuing with military fortitude and persistence. Perhaps I should tell you that this lone holdout was no autistic child seduced by the repetitive and mind-numbing boringness of the routine. Nope. It was a 50-something, roly-poly, uber-nerdish New Jersey man, the very husband of the raffle and blessing Nazi, having all that fun. He not only built the guns, but he brought all the attending supplies, which included a rubber mallet and even hair spray, which apparently lubed the tube for more effective potato launching.

He stayed until the last potato was expelled into the hot, sticky air, then trooped down the hill with all the dejection of a man filled with self-loathing. I don’t think he was angry about wasting an hour of his life. I think he hated himself for bringing just three sacks of potatoes instead of six. 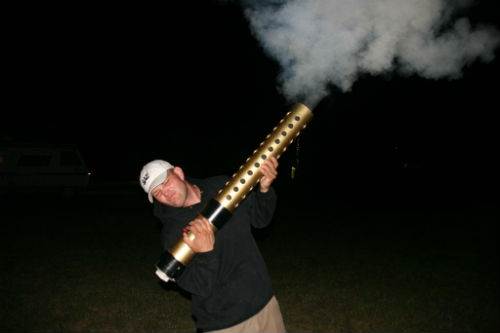