Hey-oh!!! Big news, bitches! The new season of It’s Always Sunny in Philadelphia starts this week!  The premiere of season nine will be airing on September 4th on FXX.

If you haven’t heard, that’s not your regular FX. It’s a new channel that FX is premiering in September. (They are using It’s Always Sunny to give it some legs to stand on.) So make sure you don’t miss it.

That was my public service announcement. Now we can get into the delicious shit. Now, for those of you who do not read my bio at the bottom of my columns, shame on you … and I’m from Philly. And, as most Philadelphians, I have tremendous amounts of pride in my city. It has food, art, culture, nightlife … and most importantly, ME.

I love-love-love that It’s Always Sunny films a lot of their outdoor shots here. That’s Rob McElhenney’s pride showing through. I even tried to meet Charlie Day and Glenn Howerton once when they were filming outside of my office. Glenn saw me and literally ran away, abandoning poor Charlie with the crazy fangirl. It must be the Charlie-work. But he was very sweet and he took a picture with me. Regardless of Howerton being terrified of me, I love the whole cast and I really love the show.

So here I am, honoring them and gettin’ all worked up about the new season starting. I wanted to come up with a real good recipe for you guys. I thought about doing milk steak. I thought about doing chimichangas. I thought about opening up a can of cat food and calling it a day. But when it comes down to it, I’m a Philly girl and I had to do Philly proud. So I took the two best foods that our city does and I combined them into one ooey, gooey, meaty, cheesy, hearty mess.

Here you go guys. The Soft Pretzel and Cheesesteak Strata. (A strata is a casserole, typically consisting of bread, eggs and cheese.) It’s a mass-cultivating dish that screams Philadelphia and tastes better than human meat. You’re going to have a hard time putting it down. Make it for the premiere, make it for the season finale, make it every Wednesday.

I’m just gonna leave you with three Sunny rules to follow in making this recipe: 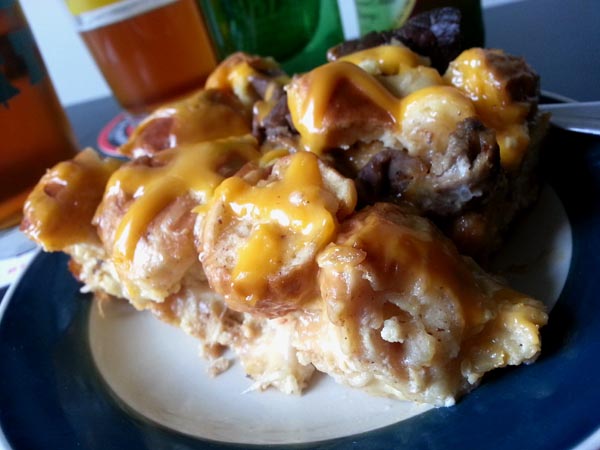 It’s Always Yummy in Philadelphia
(A Pretzel and Cheesesteak Strata)

In a skillet, melt butter. Add onions and pepper. Cook until just brown. Add in meat. Cook through. Let cool.

In a large bowl, whisk together eggs, milk and half and half.

Dump in soft pretzels, meat mixture and provolone. Toss to combine. Pour the custard evenly over your shit.

Cover and refrigerate. Be patient. Wait at least an hour (or up to overnight if you can) so the pretzels can absorb the custard.

Put Cheese Whiz in a pastry bag** and pipe over the top of the strata. (I used a criss-cross pattern.) Keep uncovered and return to oven for another 20 minutes, or until a toothpick comes out clean.

Let cool before serving. Serve with ketchup if you like. (I’m not one of those anti-ketchup snobs.)

*You can use Steak’ums (if you must).
**If you don’t have a pastry bag, us a freezer bag, just cut the tip off the corner and fill’er up. 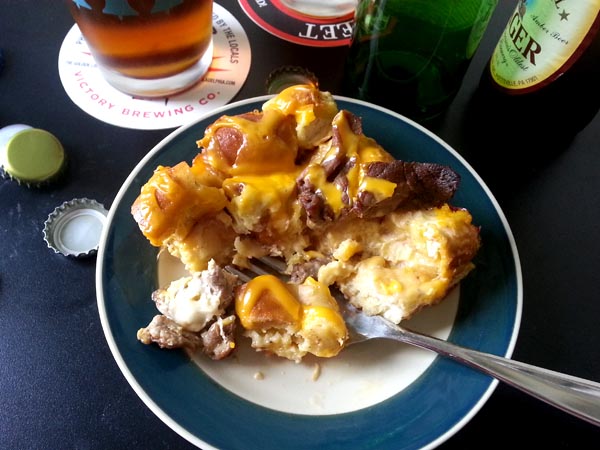