Anomalisa was never meant to be a film.

As co-director/writer Charlie Kaufman explained in an interview with /Film: “It was done as what we call a stage sound play in 2005. It was actually done on stage with [composer] Carter Burwell and a foley artist and the cast reading the script. That was the end of it, as far as I was concerned.”

It was Dino Stamatopoulos, founder of Starburns Industries, and co-director Duke Johnson (who had worked with Stamatopoulos on Community‘s stop-motion Christmas special) who approached Kaufman about adapting his play.

While the medium may not have been Kaufman’s first choice to tell this story, it does feel like the right one. The stop-motion doesn’t feel like a gimmick or a distraction. Instead, it helps to amplify the protagonist’s struggle with reality as he desperately attempts to find something real in what is, quite literally, an artificial world.

Anomolisa is the story of Michael Stone (David Thewlis), a successful self-help author who travels to Ohio to speak at a conference for customer service representatives. It is immediately clear that, despite his professional success, Stone is a profoundly unhappy man.

Everyone Stone encounters sounds exactly the same. Not similar, exactly the same. (All of these characters are voiced by Tom Noonan.) Even Michael’s wife and child sound like everyone else to him. As does his former lover, who lives in Ohio, who Stone calls out of the blue while there on his business trip. Stone’s interactions with these people range from empty to painful, but in every case, he is clearly detached. It all becomes white noise to him. 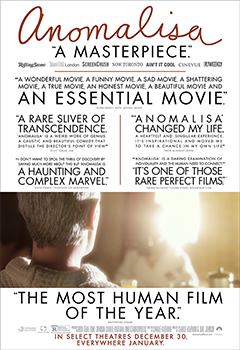 Then, he accidentally meets Lisa Hesselman (Jennifer Jason Leigh), who is the first person he encounters with a unique voice. Lisa and her friend Emily are both in town to hear Stone’s talk and both clearly have a crush on him. Emily is beautiful and charming and both she and Lisa assume she will end up hooking up with Michael, but instead he asks Lisa back to his room.

Both women are baffled by this, but Lisa most of all. She is meek and overweight and hasn’t been in a relationship in eight years. And even that last relationship was with a married man twice her age who kept her a secret. She can’t fathom why Michael is so infatuated with her.

It is Lisa’s name that gives the film its unique title. She is an anomaly in Michael’s life; the only person with a unique voice. She, too, feels like she’s an anomaly, someone who doesn’t quite fit in with the rest of society. Thus, she is “Anoma-lisa,” which becomes Michael’s pet name for her. But after their shared night together, it begins to seem like everyone else is determined to keep them apart.

Using stop-motion puppets does a few really clever things to the story. For one, it really helps to sell the fact that everyone sounds the same. They also all look quite similar – while their bodies and physical attributes may differ, they all have the same face. This would have been more distracting in a live-action film (and likely quite similar to a bizarre scene in another Kaufman film, Being John Malkovich, where Malkovich goes inside his own head and everyone looks just like him). With puppets, it is easier to accept the “reality” that everyone sounds the same.

Another cool effect of using puppets is that it completely neutralizes Lisa and Emily’s beliefs about their appearances. While Lisa’s puppet is portrayed as slightly overweight, she doesn’t look that much different than Emily. So there’s a disconnect between their belief that everyone would choose Emily over Lisa. In that sense, we are able to see things closer to the way Michael sees her. She is the one who stands out because of her voice. So to Michael, and to us, she is the more intriguing friend.

What’s amazing is the “performances” Kaufman and Johnson get from the puppets. The film feels really grounded and real. With the great voice acting performances and the fluidity of motion in the puppets (and the very realistically bland settings), it is easy to forget that you aren’t watching real people.

As much as I loved the visuals and the performances in Anomalisa, there was an ambiguity to it that left me feeling a bit hollow. When the film ended, I wasn’t sure how to feel about what unfolded. It very perfectly captures one moment in a troubled man’s life, but it’s focus was so narrow that it ultimately felt a bit unfulfilling. I couldn’t shake the feeling that something was missing, though it’s hard to say exactly what that thing is.

Still, like all of Charlie Kaufman’s work, it is a fascinating, heartfelt film that feels unlike everything else being made today. 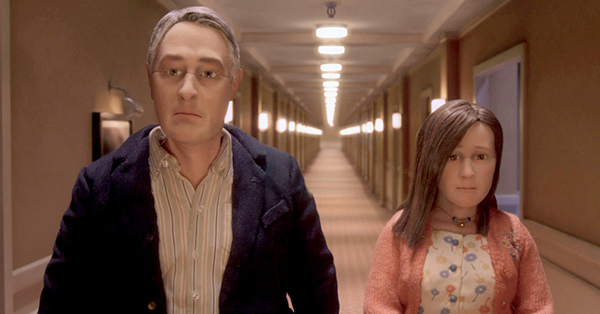