I woke up earlier than I would’ve liked today, but I knew it was coming. Anxiety kept me tossing and turning last night and, at one point, I had to practice breathing exercises to calm myself from a panic attack. I had a breakthrough seizure – something that has a number of triggers but, I can promise you, stress was a major factor. I felt awful last night, and I still did today. I am far from the only one.

I decided to rewatch the “Recall Vote” episode of Parks and Recreation this morning. It’s been a major comfort to me over the last year. Facing job losses, health crises and the eventual loss of our home, I would sit with Joel and tell him we were Ben and Leslie. Our lives had completely fallen apart, but we had each other, and that was what mattered. I have quoted “You just gotta keep climbing that hill” so many times it’s ridiculous. But it helped me keep faith, and it helped me again today.

What happened last night is not only disheartening, it is terrifying. I have seen so many friends – primarily people of color or LGBTQ – profess their very legitimate fear for their safety. I have seen women advising each other to go get an IUD as soon as possible because we don’t know what the next year will hold. I myself have have been despairing over the fate of my medical care – something I have only begun to get a handle on. I wonder what will happen to my disability claim. Joel questioned what may become of this website and the freedom of the internet if Republicans finally defeat Net Neutrality. There is a lot of grief and despair on my social media accounts.

There are also those who are ecstatic about the results. I am trying to turn my anger into compassion and, lord knows, it’s really fucking hard. I feel a great deal of sadness for the poor, white, working class individuals who will suffer greatly from this administration. They truly believed they would be better off. They believed the lies. They let their fears win. How very, very sad.

What do we do now? That is the prevailing question. I don’t know if I can honestly answer that. Today feels like a bizarre fever dream and rational thought seems out of reach. Everyone is entitled to feel what they need and cope how they must. Some may feel better soon, for others it may take a while. That’s completely fine. But what we can’t do is give up.

Today is a new type of desperation for me, but I am by no means new to desperation. I struggle daily to cope with anxiety, depression, PTSD and the minefield of chronic illness. I have felt like giving up so many times. One dark day, I actually attempted to end it all. I am very well acquainted with the crushing feeling that things will fall completely apart. That things will never be better. Through my years of therapy, I have worked hard to practice mindfulness and develop coping strategies for these feelings. At times it seems that nothing helps. But every time I feel like giving up, I search for any and all inspiration to stay in the game. I keep climbing that hill.

Giving up is an option. It’s very attractive right now. So many people are looking to flee that Canada’s immigration website crashed last night. This is certainly a way to go and I don’t blame anyone who feels it is the right way. There are a lot of people in very real danger right now.

But I don’t want to give up. I don’t want to tell my future children that, when so many of my friends were paralyzed by fear, I decided to tune out. That is not the person I want to be. We are allowed to grieve for a period of time. But we have to keep fighting. The livelihood of the LGBTQ community, POC, women, immigrants, veterans, indigenous people and countless others is at risk. You can’t be a savior for everyone, but you also cannot absolve yourself of responsibility.

I have quite a bit of hope right now. Progress has prevailed in the face of seemingly insurmountable hurdles. We are the people who have continuously put our lives at risk in order to preserve the basic rights of those around us. Donald Trump was elected by fear, but he will be defeated by the fearless. In the midst of sorrow, I have already seen efforts to mobilize people to ensure the safety of marginalized groups. I have hope that maybe, just maybe, the shock of this election will persuade people who have shielded themselves with privilege to finally listen to the grassroots movements that have been struggling to be heard. Perhaps those who have felt unaffected by injustice will finally open themselves up to the fight. There is hope.

Today is a terrible day. Grief, despair and confusion are all understandable. But this doesn’t have to be the end. We do not have to accept this reality. It’s going to be an arduous journey, but we have to keep climbing. It is who we are. I have faith. 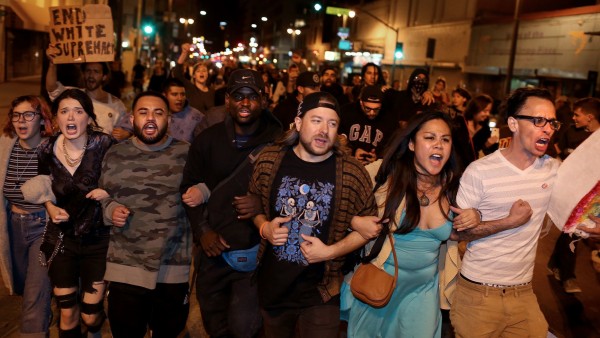