Over the past week, many news outlets have been reporting about Allen and Violet Large, the elderly Canadian couple who won $11 million dollars in the lottery, then gave most of their winnings away to various charities, hospitals and churches. These media outlets have been falling all over themselves to lavish the couple with praise for being so generous with their winnings. It’s a classic feel good story, a nice palate cleanser in between the normal mayhem and carnage that permeates the evening news.

Everyone agrees they are a sweet old couple who did something benevolent and wonderful for their community.

Everyone, that is, except me.

If I have to be the asshole here, I’ll be the asshole, but I’m going to say the one thing no one else seems to have the courage to – Allen and Violet Large are wrong for doing this. By giving away the money, they are ruining winning the lottery for everyone else.

The Larges seem like a really sweet couple who are simply adorable together. Watching them talk to interviewers, it’s impossible not to like them. It’s really moving when you hear Violet is a cancer survivor who has endured chemotherapy. They are a generous, charming elderly Canadians who have overcome adversity – on the likability scale, they are off the charts.

But where they lose me is when I hear Violet say things like this: “Why spend money when you already have everything you need?”

You may think that’s a valid point. We’ve become a consumer culture, obsessed with owning things we don’t need. As Tyler Durden preached again and again, the things you own end up owning you. You are not your fucking khakis. So maybe Violet is right.

Why the hell was she playing the lottery then? Why bother to pick up a ticket every week if you feel like you don’t need any more money or possessions? (Worse than that, the couple said they still buy lottery tickets, even after winning $11 million. Do they not understand how the lottery works?)

As someone who buys lottery tickets from time to time, I can give a little insight into the thought process that goes on in your head when you hand over a hard-earned dollar on a little slip of paper that will be absolutely worthless in a few short hours. Anyone who plays the lottery knows how slim their chances of winning are (but, trust me, we never tire of having friends, family or the loud guy behind us in line at 7-11 reminding us of how slim those odds are while buying our ticket). But like Han Solo preparing to successfully navigate an asteroid field, the last thing we want to think about is the odds. We like to think we are somehow special, the exception to the rule. Maybe, just maybe, we believe, fate will smile upon us and bless us with winning numbers, forever changing our lives for the better.

The reason someone buys a lottery ticket is so that, for those few short hours until the numbers are drawn and the ticket is crumpled up and thrown across the room in disgust, that person can daydream about their new life as a millionaire. If you’ve bought a ticket, you know you’ve done this. You start planning the trips abroad you’ll take, the exact placement of the Olympic-sized pool you’ll put behind your mansion and all of the cars you’ll purchase. (I’m not really a car guy, but I do like to imagine purchasing my own General Lee or 1989-style Batmobile.)

Sure, you like to think you’ll give some of the money away to charitable organizations. Personally, when I win the lottery, my plan is to host a giant benefit concert for some worthy cause, where I get a bunch of awesome bands to show up and rock the house. (I haven’t picked the exact cause yet because first I need to make sure it’s not one Bono is interested in – the last thing I need is that guy showing up and ruining it for everyone.) You give some of the money away, but not all of it. It just seems like such a waste. How would you feel if you were one of the other people in Nova Scotia who bought a ticket and found out that not only did you not win, but the people who did just gave the money away?

I think if the Larges really didn’t want the money (but insisted on playing the lottery week after week for some reason); they should have at least had some fun giving it away. Instead of just donating it all at once and being done with it, why not make a game of it? You know all of those hypothetical situations you and your friends ome up with late at night when you’ve all had a few beers (like: “Dude, what if someone offered you a million dollars to lick the inside of that toilet bowl clean? Would you do it?”)? The Larges could have finally been the people to make all of those ridiculous scenarios a reality. They could have traveled across North America offering people large sums of cash to do ridiculous and degrading things. How awesome would that have been?

But no, instead they gave it all to charity.

Don’t worry though, my friends. When I hit it big, I won’t make the same mistake. I won’t be giving it away through a series of outlandish stunts either. No, I’m going to do the right thing with the money – I’m going to buy a bunch of completely unnecessary and awesome stuff.

Now, if you’ll excuse me, I need to get to 7-11 to pick up a ticket. Call me crazy, but I’ve got a good feeling about this one. 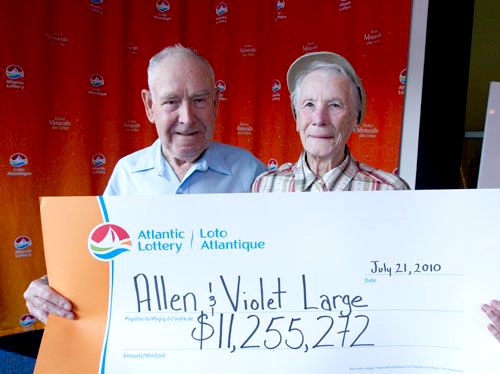