Ever since I was a kid, I’ve wondered what it would be like to be Batman. Rooftop showdowns with The Joker, last minute theatrical escapes from The Penguin, sharing longing glances with Catwoman – it all seems quite amazing.

Thanks to Batman: Arkham City, a vast open world, GTA-style video game, I’m getting my first taste of what being the Caped Crusader is all about. And it turns out that – if this game has it right – Batman’s life is a lot more mundane and ridiculous than we ever realized.

In the comics and on screen, all of the boring parts are cut out. When you only have two hours or 32-pages in which to tell the story, you tend to cut out the boring parts. Sure, one of The Riddler’s puzzles may vex The Dark Knight for a short time, but after a few pages, he’s going to crack the case. There isn’t much time devoted to Batman pacing around Ace Venture style, saying things like, “Finkle and Einhorn. Einhorn and Finkle.”

In the game – at least when I play it – that is not the case at all. Batman spends a lot of time wandering around aimlessly, not sure what to do next. And I’m not talking about being stumped by complex puzzles – for about 20 minutes yesterday, I couldn’t figure out how to get out of a room. That’s right, for a short time, Batman’s greatest nemesis was an unmarked exit.

Also, those famous inner monologues that narrate the comic take a bizarre twist in an open world environment. In the game, Batman talks to himself all the time, saying things like, “I need to find a way to get inside the precinct to confront Mr. Freeze,” but under my control he doesn’t actually know how to get into the precinct, so he just keeps muttering that line to himself over and over again every few minutes like a crazy person.

With all of the side missions in the game, you also get a sense of how tough it must be for Batman to prioritize things. Quite often, you’ll be heading to confront Joker or Penguin when all of the sudden you’ll hear someone shouting for help. Do you go see what’s plaguing them – putting your main objective on hold – or do you pretend you don’t hear them? How many muggers and small-time crooks get away with things because Batman has to go rescue a set of twins being held hostage by Two-Face at the Second National Bank on 22 street? You probably won’t last long robbing banks or blowing up hospitals, but if you want to run a low-key bootleg DVD business in Gotham, chances are you can do it without having to worry about any vigilante justice.

Of course, those moments when you do figure out where to go and you end up beating down five thugs at once or throwing down on a one-armed giant with a mallet, it is pure bliss. And luckily, no one is around to see the times when Batman is looking confused. The rest of the world only sees the good parts.

Perhaps the awkward parts are just me though. Batman spent most of his life training to be a crimefighter. He’s a highly skilled genius, so maybe he doesn’t spend as much time hopelessly lost as he does when my hands are on the controller. What I’m saying is – and trust me, this is hard for me to admit – maybe us average folks just aren’t cut out to be Batman.

I think that’s a lesson real life superhero Pheonix Jones recently found out the hard way. Jones is a vigilante in Seattle, a villainous place overrun by rogue grunge bands and nefarious legions of Starbucks employees. Last week, he got to recreate a scene straight out of the comic books – he unmasked himself on the steps of the courthouse, revealing his secret identity to the world.

But the reason Jones did it wasn’t one you ever want to face as a crime fighter. He didn’t do it to keep innocent people from getting hurt like Harvey Dent did in The Dark Knight or to get chicks like Tony Stark did at the end of Iron Man. Jones did it because he was facing charges for dousing four people with pepper spray. He thought he was breaking up a fight, but it turns it was just a group of friends playing around.

It turns out being a crimefighter is harder than you think. Making split second decisions sometimes backfires in the real world. But I do hope Jones – whose real name is Benjamin John Francis Fodor – keeps fighting the good fight. He has a background in MMA and a sweet flattop that makes it look like he’s auditioning for a Kid ‘n Play tribute band, so I I’m happy that he’s out there trying to make the world a better place.

As for me though, I think I’ll limit my crimefighting to my Xbox 360. I may not be the hero Gotham deserves or even the one it needs right now, but somehow has to keep this virtual world safe from unmarked exits. 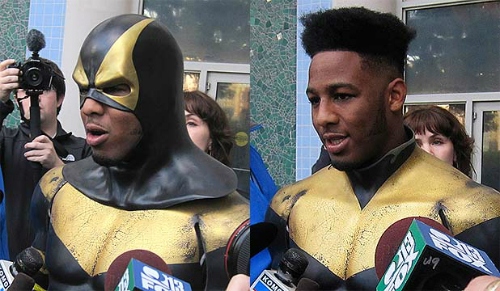