Along with friends and fellow actors Julianna Guill and Cyrina Fiallo, Brie performed as the opening act for Jones Street Station. Brie’s group, The Girls, backed by Jones Street Station, had their debut performance, covering everything from Bruce Springsteen to Hall and Oates to Childish Gambino.

We caught up with Brie moments before the show to talk with her about her newfound singing career, her adoring fans and her roles on two of the most beloved cult shows on television.

[As the interview was about to begin, a large group of fans came up to Alison to ask for autographs and photos. She was more than happy to oblige.]

Not often. [Laughs.] Not often enough for it to be annoying in any way. It’s still sort of very flattering and I’m just excited that people came out to see our show, you know?

With two big shows on –

I mean, would you call them big? [Laughs.] I would say that they have very intense followings, but not very large followings. Even Mad Men, which I think reached its highest numbers this year, comparatively it’s still a bit different.

[More people came up to talk to Alison and ask for autographs.]

As I was saying, this never happens. [Laughs.]

You paid all of these people to come by during the interview.

I hired them. I knew you were coming and I was like, “This is going to be great.”

We appreciate the attention to detail.

So how did this show come about?

Danny Pudi is good friends with the guys from Jones Street Station.

He was in one of their videos, right?

Then Danny and I did a couple of songs with them in LA when they were playing in LA during Thanksgiving. And then they were like, “You should come out.” They just sort of offered to have me come out and open for them.

I thought, “Oh well, my two best girlfriends and I like to sing in our private time” and I thought, “What a great opportunity when a band comes and says they’ll play as your backup band and come open for us and do our show.” Who doesn’t want to be a rock star for five minutes? So we just embraced it.

So this is the first time you three have sung publicly together?

What kind of music are you performing?

It’s all cover songs. We’re doing eight covers. It’s a mix. We each chose a couple songs that we really loved to sing in the shower or in our cars or songs that we really liked. Then we just learned some interesting harmonies to them. The band is sort of a bluegrass-esque band, so our take on these songs errs on the side of country and bluegrass.

We enlisted the help of Ludwig Göransson, who plays with Childish Gambino and is also our composer for Community. He does all the music for our show. And so he helped us come up with some interesting harmonies and arrangements for the music and it’s been really fun.

The shows I work on are so great. I feel like my day job is my passion project, so it’s been extra cool to have an additional passion project and it’s just a fun thing to do to get together on weekends. I think all of us are just kind of shocked that we’re actually doing it, that we actually followed through and this thing became real. It was sort of like I think us and the band just had a series of waiting to see if the other one was going to call each other’s bluff and nobody ever did, so now it’s happening.

So do you see you three doing more of this?

I think it’s really just sort of a one time thing. We’re really just doing cover songs, so we’re not delusional in thinking we’re like this band now. My album is not dropping anytime soon. I think it’s just that we love singing, we had this opportunity, we felt like we had to take it. We’re really excited. Then we’ll go from there.

I can’t imagine that we would not want to do this again. So we’ll just have to see how it goes.

Did you talk to Donald Glover at all about the show?

Absolutely. I got his permission because we’re going to sing one of his songs.

And, he was like, “Of course, that sounds fucking great.” So I talked to him a little bit about it. But honestly not as much as you might think. We’ve kind of been on our own.

So what can we expect for Community?

I wish I could say. I don’t know. For the rest of the season, amazing things. These last two episodes should be an indication to everyone of what’s ahead. We’re going to finish the season really strong with a lot of really solid, fun, adventurous episodes and then, I don’t know. We’re just waiting to hear about season four. It’s anyone’s guess.

Are you optimistic about it?

I am. I think we all kind of are. We’ve had strong numbers since we came back. There’s really no other way to be than optimistic. We all want the show to come back. It’s not going to do us any good to be condemning it in our minds.

With Community and Mad Men, what it it like to be on two acclaimed shows at the same time?

It’s incredible. I just totally lucked out. It’s totally amazing. I have days when I get to do both in the same day and it’s really fucking great. Sorry for swearing.

That’s got to make for a long day though when you are filming both shows.

Yeah, yeah, yeah. It can be intense, but I never feel like I’m living the dream more than when that’s happening, in the cheesiest possible way.

Do you have to switch your brain to go from one to the other?

Not really. The environments are so different on each set and the characters are so different and the wardrobe and hair and makeup is so different. It’s not a difficult transition. And also, by this time, I’ve been working on Mad Men for five years and Community for three, so you get in a groove with them and it’s not the same.

Although I do always get a little nervous coming back to Mad Men every season because it feels like it’s so long between seasons and this last season especially. It’s such a long hiatus that when we get back, there’s always that little bit of nervousness like, “Okay, hope I remember what Trudy’s like” and then I always do. 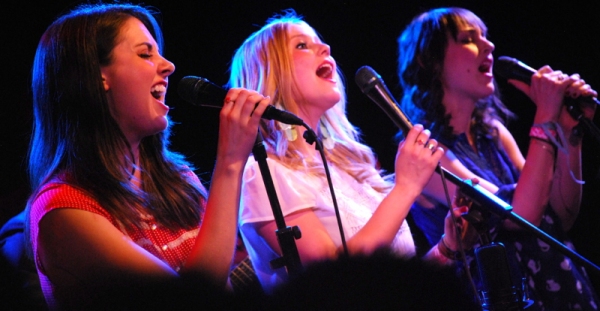