“… neither idiots, lunatics, paupers, felons nor women shall be entitled to vote.”

It’s history lesson time. My only regret is that I’m not completely drunk and recording this for Comedy Central. (I’m just a little drunk.)

So. August 26th, 1920. The 19th Amendment to the Constitution gave women the right to vote. So each year, the President makes this proclamation that it’s Women’s Equality Day and everyone gets excited that women are no longer being shat upon in that regard. So like, Happy-that-day-is-today.

I’m not going to give you the full boring history of the movement. I’m sure many of you learned all about it in – I don’t know when they teach this shit – middle school? And if your interest is sparked, that’s what Wikipedia is for. But the gist is, over the course of many decades, there was this grand awakening that women are people too. Crazy, right? So a bunch of men in the Liberty Party (cause, obviously men had to get this started since women had no pull) made it a plank in their platform. Then over the course of like 70 years, it finally made it’s way to being a Constitutional amendment. The freaking length of time is such a depressing part about this story, but … it happened and we’re all grateful.

That’s the broad overview. Here’s where we are going to zoom in on some of the more fun things that I bet you didn’t learn about in middle school AND are actually relevant to why you guys come here and read my column.

There’s this stigma against cooking, in terms of feminism. The whole “a woman’s place is in the kitchen” attitude has really ruined shit. I’m hoping we’re pulling away from that as cooking has become more of a respected art. Being a “foodie” is a growing trend, there are multiple television networks dedicated to it, chefs are celebrities and the Internet has made it possible for fools like me to distribute recipes right to your faces. So for the sake of this column, we are going to eliminate the attitude that women-in-the-kitchen is something we need to fight. Instead we’re going to embrace it and look at how women used cooking as a way to fight back.

In 1886, Hattie Burr pulled together The Woman Suffrage Cook Book. It was used as a fundraising tool for the movement. It was jam packed full or recipes, some of which were even designed to get you all riled up such as their “Rebel Soup” and “Election Cake.” (Recipes below.)

After this, tons of suffrage cookbooks started making their way into existence and with each passing year, the tone got a little more bitey. The 1909 Washington Women’s Cook Book was dedicated to “the first woman who realized that half of the human race were not getting a square deal” and the 1915 Suffrage Cookbook gathered important public figures to make statements and recipes in support of the movement. It also included a very special recipe, “Pie for a Suffragist’s Doubting Husband,” ingredients of which include human kindness, impure food and poisonous water.

I love it. Publishing cookbooks with this much voice in a time when they were being told they shouldn’t have a voice was bad-fucking-ass. It’s no coincidence that they were doing it through food, through the things that they knew. Looking back on it, they grasped onto the stigma that was holding them down and used it to elevate and empower them … and that’s a beautiful thing.

I wish I could end this on a nice note, about how everyone in this country has equal rights and about how far we’ve come. I respect, appreciate and adore everyone who fights for the causes of the past and what lies ahead of us. But there’s still more work to do. Equal rights across the board is a constant struggle. How people could possibly believe that some people deserve more than others is sickening to me.

So I encourage you. All of you. Get barefoot. Get in the kitchen. Make some rebel soup and some election cake. And fight for equality.

Rebel Soup
Heat one quart of milk to the boiling point, add one cracker rolled fine; to one cup of tomatoes add one-fourth teaspoonful soda, stir, and while foaming add it to the boiling milk; put butter, salt and pepper in the dish and pour the soup on them.

Election Cake
Five pounds flour, six eggs, two pounds sugar, one pint yeast, three-fourths pound butter, one quart sweet milk, three-fourths pound lard, six nutmegs. Take about three pounds of the flour, and about one-third of the sugar, and stir up with the yeast and two-thirds of the milk, to rise over night, or until it begins to fall on the top; then add the rest of the ingredients and bake in loaves about the same as you would bread. 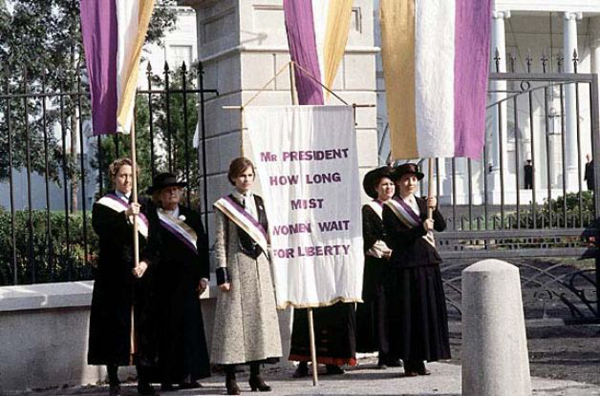