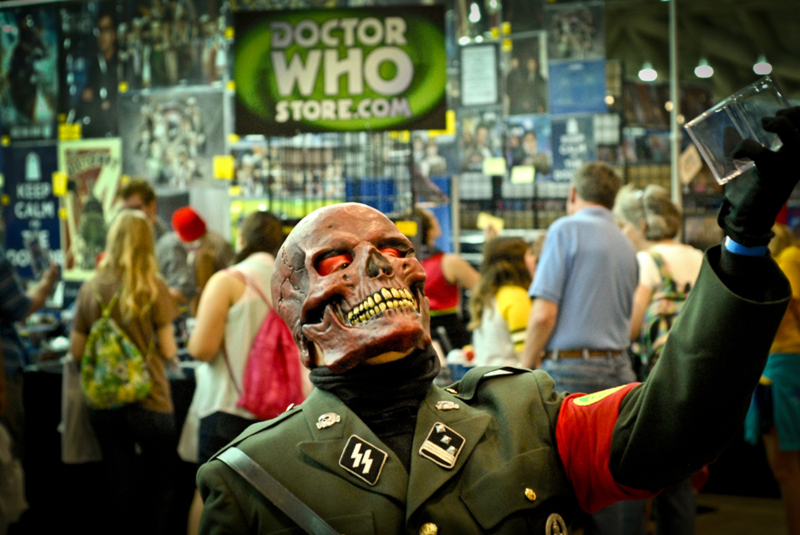 The San Diego Comic-Con has become synonymous with Hollywood, as studios use the annual gather as an outlet to promote their newest TV shows and movies. But at the Baltimore Comic-Con, held this past weekend at the Baltimore Convention Center, comics are still king.

“Baltimore has always been really art heavy,” said Sara Richard, one of the artists who rented a booth to display and sell her work. “A lot of the other shows, they have a lot of celebrities, so most people are drawn to that. But Baltimore has been consistently a lot of people who appreciate art.”

The 14th annual Baltimore Comic-Con, hosted by Cards, Comics and Collectibles of Reisterstown, Maryland, featured an impressive list of established names in the comic book industry, including Neal Adams, George Perez, Amanda Conner, Frank Cho and Mark Waid. It also featured a host of indie artists like Richard and local comic book stores who rented tables in hopes of meeting fans, promoting their brands and making some money. However, in a sign that Charm City isn’t completely immune to the Hollywood invasion, this year’s convention also featured an appearance by Kevin Smith and Jason Mewes, who hosted a screening of Jay & Silent Bob’s Super Groovy Cartoon Movie and filmed a segment for Smith’s AMC reality TV show Comic Book Men with the show’s cast, Walt Flanagan, Mike Zapcic, Bryan Johnson and Ming Chen.

For comic book artist and writer Mike Mignola, who created the series Hellboy for Dark Horse Comics, the mainstream attention Hollywood can bring to these comic book conventions can be a double-edged sword.

“It’s nice to get a chance to see people and hear what people think of the stuff,” said Mignola. “Unfortunately, it seems like shows are getting bigger and bigger. Especially if it’s a show you haven’t done in a while, you end up with a crowd – which is great, don’t get me wrong – but you don’t really get a chance to talk to anybody. You’re just grinding out signatures.”

On top of that, Mignola says that increasingly he has people coming up to him that only know of his work because of the two Hellboy films starring Ron Perlman. He said the most common question he is asked at conventions is whether or not there will be a Hellboy 3. And often times, he runs into “fans” who aren’t actually familiar with the comic books.

“There was a guy here today, he had me sign every single thing that had anything to do with all of the DVDs – all the DVDs, plus the booklets, plus the animated thing,” Mignola said. “So I signed this whole pile of stuff, but it’s like, ‘Have you ever read the comic?’ He’s like, ‘No.’”

But Mignola still appreciates the notoriety that Guillermo del Toro’s films have brought him and would very much like to see a Hellboy 3 (which is something he has absolutely no control over).

“The movies have done so much good though as far as introducing a lot of people to the comic. I’d never complain. But it’s funny when people say, ‘I’m a big fan of Hellboy, but I’ve never read the comic,’” said Mignola.

While Mignola spends most of his time at conventions fielding questions about future movie adaptations of his franchise, Richard spent a lot of time at the Baltimore Comic-Con doing sketches for paying customers. Richard, who lives in New Hampshire, travels to around 15 to 20 conventions a year as part of the artist collective Station (which is a nod to Bill & Ted’s Bogus Journey). She normally does around 10 sketches in a convention weekend, but at the Baltimore Comic-Con she did around 15 original pieces of artwork.

Many fans ask her to do My Little Pony sketches for them, since Richard has been doing variant covers for IDW’s My Little Pony: Friendship is Magic microseries. But she also got requests to draw characters she has no affiliation with, like Rocky Raccoon, Kaylee from Firefly and Kitty Pride. The sketches take anywhere from 10 minutes to an hour and a half to draw, depending on her familiarity with the character and the complexity of the request. Sometimes she uses her phone to find reference images to make sure she gets the little details right.

Using iconic characters as a bridge to introduce fans to a creator’s original work can be an effective tool at a comic book convention, even for established artists like Ron Randall. Randall, who works out of Periscope Studio in Portland, Oregon, is a freelance artist who has been in the business for over 30 years, doing work for DC and Marvel, as well as commercial gigs for companies like Disney, Nike, SeaWorld and PlayStation. The banner behind him at his booth at Comic-Con featured artwork Randall did of Supergirl and Wonder Woman. But what he is most proud of, and what he hopes to get more exposure for, is Trekker, the series Randall created for Dark Horse Comics back in the 80s.

Trekker, a sci-fi comic telling the story of troubled bounty hunter Mercy St. Clair, was published intermittently throughout the 80s and 90s, though Randall admits that at times it was hard for fans to find every issue and keep up with the serialized elements of the series. After laying dormant for a number of years, Randall has revived the series. The Trekker Omnibus was released last month and TrekkerComic.com makes it easy for fans to read previous stories and to stay up to date on new chapters. Randall hopes that events like the Baltimore Comic-Con will help spread the word about the series.

While part of doing the convention circuit is selling people on your brand, some of the artists take a very relaxed approach to it. Jessica Grundy, who lives outside of Houston, Texas, has been doing conventions for two-and-a-half years and she prefers a laissez-faire approach to sales.

Grundy says that she does conventions almost every weekend of the year. During the week, she draws, paints and manages the online store she runs through Etsy. She does it all while raising two small kids, who occasionally have their own requests for artwork.

“Right now, my son is really interested in drawing circles and trains, which is not what I draw, but it’s fine. I’ll draw it for him. I like when they get artwork sent home from school and I can see whatever they want to draw,” said Grundy.

Artists and writers just starting out in the industry can use Comic-Con as a way to make important connections. One of the booths on the floor was for Creator’s Edge Press, an independent publishing company based out of Washington state. They are always on the lookout for new artists and used the Baltimore Comic-Con as one way to get a foothold on the East Coast. Creator’s Edge’s art director and submission’s director Travis Bundy explained that the company is made up of comic creators who are looking to use their experience to help new artists and writers follow the path to success.

“We try to get them to avoid a lot of the pitfalls that we did because we’re just a group of comic creators that have been doing this our whole life,” said Bundy.

Bundy said the company carefully reviews all of the submissions sent into them, trying to give specific feedback on rejected submissions of what worked and what needs to be improved. According to Bundy, this is a far cry from what the bigger companies do when artists and writers submit their work. When he submitted his first comic to Marvel, all he got was a letter back explaining that his submission had been incinerated. Bundy said the letter simply stated: “Because your book doesn’t have any Marvel characters, it has been destroyed.” He saved the letter, hoping to frame it and put it up in his office one day when he makes it big.

Artists that Creator’s Edge Press does accept retain the rights to their property and they split the profits from their published books 50/50 with the company. Creator’s Edge also goes to conventions in the towns that their creators live so that the artists and writers can be there at the table meeting fans and promoting their books. They don’t have any writers or artists from Baltimore published yet, but Bundy is keeping his eye open for local talent.

Whether you are an aspiring artist looking to break into the business, a collector looking to score some original prints or hard to find out-of-print comics or simply a cosplay enthusiast looking for an excuse to wear your Judge Dredd costume, the Baltimore Comic-Con continues to be one of the purest comic book conventions left in the country. At least, for now.