If you only know Mike Patton from the influential alt rock band Faith No More, or even from his days in Mr. Bungle, then you don’t really know Mike Patton. Since seeing Faith No More disband in 1998, Patton has had an eclectic career with a number of projects and bands such as Tomahawk, Lovage, Fantômas and Peeping Tom.

Patton recently took some time out of his busy schedule to talk to us about his life, his career and what it feels like to be in a video game.

What inspired you to get into music?

Nothing in particular. We were just a bunch of high school kids that wanted to goof off. Boredom.

During the early Mr. Bungle days, did you think that making music was something you could do for a living?

Oh my god no! I worked at a record store. I think that is what I expected making a living would entail. I did not drink or do drugs back then, I just did music for a goof.

Did playing music, singing and composing come naturally to you or was it something you had to really work at to become proficient?

Oddly, it just came naturally. I never trained or anything. I guess I was lucky. I thank the good lord every night when I drop to my knees.

Although you have had quite the prolific career, you are probably most well-known as the singer of Faith No More. What is it like now when you think back on the Faith No More period in your life and what did you take away from that experience?

I have almost completely great memories. It was a lot of fun and a great experience. But to be honest I don’t reflect that much. I still got too much to look forward to and I’m always working on something. I was pretty young so it was cool to be able to travel the
world and discover.

Your choice in projects has been rather eclectic. How do you choose these side projects and what drives you to do them? Is it simply a desire to try new things as an artist, or is there something more to your choices?

Most of the time it just happens. I get sounds in my head and put them on tape. At this point it is pretty obvious to me which band they should be for and how it should develop. I honestly don’t try to be eclectic or difficult, it just happens that way. I make music
for myself and hope others dig it.

What artists or bands have influenced you?

You have worked with a wide range of talented artists, such as Rahzel, Jennifer Charles, Bjork and Kool Keith. Are there other artists out there who you have the desire to work with who you have not yet had the opportunity to collaborate with?

Of course! The list is endless. It is really what makes life interesting. Meeting and working with other musicians. Guys like King Buzzo, Duane Denison, Dan the Automator, John Zorn, Kaada and others who are now my friends. It is fascinating to see how others work. People like Bjork, who is so meticulous. It makes it all exciting.

Talk with us a little bit about today’s music scene. What bands or musicians out there today would you pay money to see? Who do you wish would just go away?

Ahhh, I don’t know how to answer that. There are a ton of great bands out there but even more that bore me to tears. The thing about these kinds of questions is that really, what do my opinions mean? Music is an art form and everyone has different tastes, so if I
say I love Sigur Ros and Melt Banana and hate all emo bands, that does not mean that any of them won’t affect you in a different way. I love all the bands on our label, Ipecac Recordings, I’ll tell you that!

What would you be doing for a living if you weren’t making music?

Either a taxidermist or a taxi driver or a junkie.

Do you see yourself pursuing film scoring and soundtrack composition in the future? What is your favorite film soundtrack? On a side note, what was your favorite track off The Director’s Cut from Fantômas?

I don’t limit myself. I’d love to do more film scoring, videogame scoring, acting, voiceover work. I really dig a lot of soundtracks. Not sure if I have one favorite and I certainly don’t have a favorite Fantômas track. I think they all work, obviously. I
just love how sound can really enhance any film. The masters know how to be subtle yet important.

You are the voice of the title character in a video game called The Darkness.
What moved you to take on that project, and how were you approached?

The company that made it approached me and made me an offer. It was a new challenge.

Can you tell us a bit about the game?

It is what convinced me to sign on. It is a dark horror adventure game. I’m a mysterious force that inhabits the main character and leads him on a violent murder spree. Family fun!

What is it like to play a game that you are in?

It is pretty cool. I love videogames. A little trippy to hear oneself. But I have done a couple more games since then and am about to do a huge one.

What do you do to unwind?

Eat, play videogames, watch sports, tend to my llamas, watch movies, read. Same things you probably do. I need to get better at unwinding though. 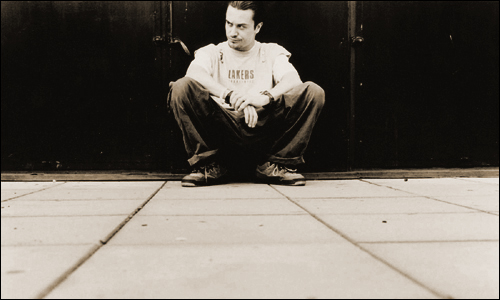