Bolt is a computer animated film from Walt Disney Animation Studios, but if I didn’t know better, I might think it was the latest release from the king of computer animation, Pixar. As most of you know, Disney acquired Pixar in 2006 and it seems that since that time they have been learning all of the company’s secrets and have used them to make a beautiful and thoroughly entertaining film.

Bolt is the story of Bolt the dog (voice by John Travolta) who, after being adopted by a young actress (voiced by Miley Cyrus), is cast as a genetically-altered superdog on a popular television show. In the show, Bolt has a variety of powers, including superstrength, superspeed, lasers that shoot out of his eyes and a sonic bark. He uses these powers to protect his owner, Penny, from the evil Dr. Calico (voiced by the always phenomenal Malcolm McDowell).

The Director (voiced by Inside the Actor’s Studio’s James Lipton) wants Bolt’s performance to be as convincing as possible, so he does everything he can to keep Bolt from finding out that he doesn’t actually have superpowers, because, as he puts it, “If the dog believes it, the audience believes it.” So Bolt doesn’t know he is on a TV show; the cameramen and crew hide just out of sight and secretly film him. Week after week, Bolt believes he is actually saving Penny’s life again and again.

Everything goes along fine until the makers of the show decide to spice things up and give the show a cliffhanger ending. For the first time ever, Bolt doesn’t save Penny at the end of the day, so when production shuts down for the weekend, Bolt is left alone in his trailer and he believes Penny’s life is still in danger. So he escapes the set and runs off to save a girl who doesn’t actually need saving, and he plans to rescue her using superpowers that he doesn’t actually have.

Along the way, Bolt takes a tough alleycat named Mittens (voiced by Susie Essman) hostage, since he believes that she is secretly working for the evil Dr. Calico. Throughout the film, the two are tethered together by Bolt’s leash. They eventually encounter a hyperactive hamster named Rhino (voiced by Mark Walton). Rhino has been watching Bolt on television for years (and believes that everything he sees on TV is real), so he begs the superdog to take him along on his latest adventure. Together, the three travel across the country in search of Penny.

Overall, Bolt is a really funny and entertaining film. Having Bolt believe that he really has superpowers and having him run off to rescue someone who doesn’t need rescuing is a fresh twist on what would otherwise be a standard cross country journey. Also, all of the characters are well-thought out and they all add something to the film. Mittens works great as Bolt’s foil since he has been living in a fantasy world and she has been living on the streets, doing whatever she can to get by. Rhino works great as a sidekick and he offers comic relief throughout the film. Even the minor characters, like Veteran Cat (voiced by Diedrich Bader), Penny’s sleaze ball agent and the New York and LA pigeons, are amusing and memorable.

The voice acting is top notch as well. While the trend in recent years has been to just go out and get big-name stars for animated films, you can tell the makers of Bolt went out and found the right big-name stars. John Travolta and Miley Cyrus both add something to their characters, instead of just reading the lines and cashing their paychecks. Susie Essman absolutely nails the role of Mittens – making the character both tough and lovable at the same time. Malcolm McDowell has one of the greatest voices in Hollywood today, so he gives Dr. Calico a lot of personality, even though we don’t see much of the villain in the film.

The one voice actor who isn’t a big name star is Mark Walton, who portrays Rhino in the film. Walton is a story artist for Walt Disney Animation Studios. He originally recorded all of Rhino’s lines for a temporary audio track given to the animators while they were looking for someone else to play the part, but Walton did such a great job with the temporary track that he was given the role. It’s great that they were willing to take a chance on him since he isn’t a known actor and it was absolutely the right move, since Rhino is one of the best characters in the film thanks to the charisma and energy he brings to the role.

Visually, the movie is incredibly impressive, especially on Blu-ray. As I said before, it seems like Disney has learned a lot from Pixar and they have managed to put together a beautiful film. All of the characters and set pieces are magnificently rendered. One of the nicest touches is that they managed to match the lighting conditions in LA, New York, Las Vegas and Ohio, which makes it look like the various cross country scenes were actually shot on location at the states they are taking place in.

The one odd choice visual choice the filmmakers made was to use matte paintings for the backgrounds in long shots, instead of actually rendering the backgrounds in 3D. The filmmakers said that using painted backgrounds was their way of paying tribute to Disney’s rich animated history, but I can’t help but wonder if it was actually a cost-saving move that kept them from having to render complex 3D landscapes. Either way, the matte paintings feel out of place in the rich 3D world they created and ultimately I wish they hadn’t used them.

However, the fact that matte paintings are my only real complaint about the film should tell you just how great Bolt really is. Walt Disney Animation Studios might not be ready to surpass Pixar just yet, but the fact that they can now be talked about in the same conversation as the reigning king of animation is an achievement in and of itself. 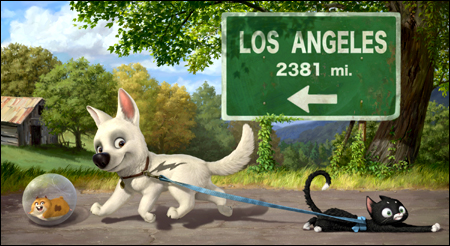 Written by Joel Murphy. Bolt is available on Blu-Ray and DVD now.

The Blu-ray version of the film comes with a DVD and digital copy of Bolt, which seems like overkill, but you’ll certainly be able to enjoy the film no matter where you are.