Sin City is a dark place filled with corrupt politicians, heroic fall guys and an army of hookers who keep the peace down in Old Town. It’s a city where you can be shot, bludgeoned with a sledgehammer and electrocuted and can live to spout off a witty one-liner. It’s a black and white metropolis where it always rains and the only splashes of color come from things like blood and yellow child-molesting monsters. In short, it’s not the type of place you would ever want to live.

It is, however, a very wonderful place to visit. Comic book fans have been visiting Frank Miller’s Sin City for years, but in 2005, Miller teamed with director Robert Rodriguez to bring his dark city to life in a collection of memorable film noir stories. Using green screen technology and cutting edge special effects, the two co-directors were able to faithful adapt Miller’s original vision to the big screen, creating a unique and visually-stunning cinematic experience. And now, that cinematic experience has been re-released in a special two-disc edition.

Sin City is a collection of four separate stories.

The first story, “The Customer is Always Right,” is a brief vignette that unfolds at an upscale party. A beautiful woman (Marley Shelton) is standing on the balcony when she is approached by a mysterious stranger (Josh Hartnett), who offers her a cigarette. The woman quickly learns that this is not a chance meeting.

The second story, “That Yellow Bastard,” is broken up into two parts in the film. In it, police officer John Hartigan (Bruce Willis) is trying to protect Nancy Callahan from Roark Junior (Nick Stahl), a child molester and killer who is being protected by his powerful father, Senator Roark (Powers Boothe). Hartigan is willing to do whatever he must do to protect the girl, no matter the cost.

“The Hard Goodbye” is the third story in the film. It centers around Marv (Mickey Rourke), a tough guy with a face only his mother could love, who makes love to a beautiful woman named Goldie (Jaime King). Marv later wakes up to find Goldie dead next to him as police sirens approach his hotel. Knowing he’s been framed, Marv rushes out to find the men responsible and to avenge Goldie’s death, since she was the first woman to treat him so lovingly.

The final story is “The Big Fat Kill,” which centers around Dwight (Clive Owen) and the aforementioned “army of hookers.” Dwight is dating Shellie (Brittany Murphy), who is being harassed by her ex-boyfriend Jackie Boy (Benicio del Toro) and his friends. Dwight embarrasses Jackie Boy, who storms out of Shellie’s apartment and heads to Old Town to aggravate the hookers in order to make himself feel better. However, things quickly take a bad turn and the hookers are forced to make a tough decision that threatens their peace with the cops and the mob. They must act fast to keep from losing control of Old Town.

In the original theatrical release, “The Big Fat Kill” is followed by the second part of “That Yellow Bastard” and an epilogue featuring John Hartnett’s character. However, on this new version of the film, in addition to the theatrical release, all four stories can now be viewed separately in extended unrated versions. So if you just want to watch all of “That Yellow Bastard” without watching the rest of the film, you can. It’s a nice idea. The only story that doesn’t really stand alone well is “The Customer is Always Right,” which has the epilogue with John Harnett tacked on to the end of it in the stand-alone version, but the epilogue doesn’t really make much sense without watching the rest of the film.

In addition to the unrated versions of the four stories, the two-disc Blu-ray comes with quite a few extras that allow you to delve deeper into the film. There are a series of 8-10 minute featurettes that each focus on different aspects of the film, including the costumes, the props, the cars and the make-up. The two most interesting featurettes are “How It Went Down,” which reveals how Frank Miller was convinced (or, how he puts it, “seduced”) by Robert Rodriguez to make the film and “Special Guest Director,” which gives a behind-the-scenes look at the one scene in the movie that Quentin Tarantino helmed as a special guest director. The other featurettes are still worth watching and they help you to appreciate the attention to detail Miller has in his drawings, since the cars and props used in the film all came directly from his comics.

The two-disc collection also has two separate commentary tracks, one with Rodriguez and Miller and one with Rodriguez and Tarantino. If you are a fan of manic rambling explanations of trivial things, I suggest going with the Tarantino track. There is also an audio track that features the Austin audience’s reaction to the film. On the Blu-ray version, there is also an exclusive interactive comic book called “Kill ’Em Good.”

However, the most exciting bonus content is grouped under a subcategory called “Rodriguez Special Features.” Any aspiring filmmakers or anyone interested in the behind-the-scenes aspects of filmmaking will definitely benefit from watching these special features. In “15-minute Flick School,” Rodriguez gives fascinating insight into the making and editing of the movie. The director explains things in a very down-to-earth way and tries to show you how you can make a film on a tight budget. It’s very inspiring to watch.

Rodriguez also includes an “All Green Screen Version” of the film, which shows you what the movie looks like without all of the special effects added in. The green screen version is sped up 800% so that you see the entire movie in around 10 minutes. There is also a feature called “The Long Take,” which shows you a 14-minute take directed by Quentin Tarantino. “The Long Take” gives you a feel for what it’s really like on a movie set and it’s the kind of thing you don’t usually get a chance to see.

There are also a couple of fun featurettes included under the “Rodriguez Special Features.” “Sin City: Live In Concert” is a high-def recording of a song by Bruce Willis and the Accelerators, who performed at a special concert with Rodriguez’s band Chingon during the filming of the movie. There is also “10-minute Cooking School,” which features Rodriguez sharing two different recipes for breakfast tacos (which looked delicious).

Sin City is a visually-stunning film that was definitely meant to be viewed on Blu-ray. The film, and the large amount of quality special features that come along with it, make this special edition worth the price. I definitely recommend picking up a copy today. 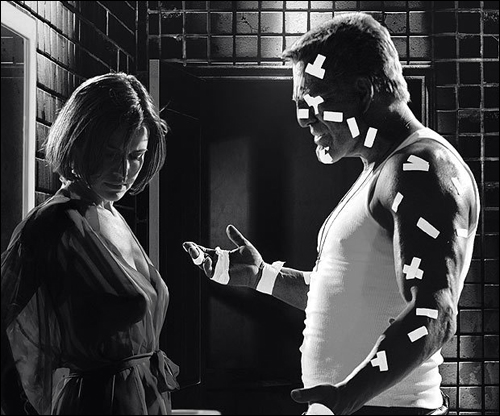