“You tell them I’m coming. And hell’s coming with me.”

If you are a fan of authentic Westerns, all-star casts or bushy mustaches, then Tombstone is your huckleberry.

Set in 1879 in the town of Tombstone, Arizona, the film tells the story of Wyatt Earp and Doc Holliday’s confrontation with The Cowboys, a battle of wills that eventually lead to the infamous shootout at the O.K. Corral. The film prides itself on being as historically accurate as possible. As such, all the characters are presented in shades of gray. Wyatt Earp (Kurt Russell) is depicted as a businessman who reluctantly becomes a marshal again in order to appease his brothers. The Cowboys, the bad guys in this film, are well-rounded characters who are actually likable and charming at times. While I can’t speak to the film’s historical authenticity, it does feel more realistic than other Westerns, though at times during the gunfights, it definitely seems like a liberty or two was taken in the name of showing a kick-ass action scene. Honestly though, it’s a worth taking a few liberties, since the fight scenes really are exciting to watch.

Historically accurate or not, where the film is less successful is on the romantic front. The writer was presented with a problem, since Wyatt Earp is already married when he falls in love with actress Josephine Marcus. The solution the writer came up with was to marginalize Earp’s wife and to just sort of pretend like Earp’s infidelity isn’t that big of a deal. Making matters worse is the fact that the romance between Wyatt and Josephine just isn’t very well-written. Wyatt stares longingly at her a great deal in the beginning of the film, then the two go on a horse ride/picnic and … well, that’s about it. Dana Delaney does her best to make Josephine sexy and interesting, but the storyline just sort of falls flat.

The film was originally released in theaters back in 1993, but it was just released on Blu-ray last Tuesday. When any film from almost 20 years ago is given a high-def rerelease, the two most important questions are always 1) How does the film hold up over time and 2) How does it look and sound on Blu-ray? The answer to the first question is – the film holds up surprisingly well. Being a period piece to begin with and being a film without any big special effects, there’s nothing about it that screams early 90s. Outside of the fact that all of the actors in it look a bit older now than they did back then, there isn’t anything that gives away the fact that this film is now 17 years old. It also looks and sounds great in high-definition. There are a few times when the film is a bit grainy, but overall it looks great and the colors (particularly the reds on the Cowboys’ sashes and the tans of the desert) really pop on Blu-ray. And the music and gunshots all blare as loudly and as clearly as you hope they would.

What’s really fun about going back and rewatching this film now is seeing just how many name celebrities are in it. It was conceived as an ensemble piece and many of the actors in Tombstone were well-known at the time, but there are also a number of actors who have gained more notoriety since this film has been released and, as a result, you may not have even realized they are in this movie. As mentioned above, Kurt Russell plays Wyatt Earp. Wyatt’s two brothers, Morgan and Virgil, are played by Bill Paxton and Sam Elliott (and Sam Elliot’s mustache, which should really have separate billing). Wyatt Earp’s good friend Doc Holliday is played by Val Kilmer, who is great in the role, even though his “Southern” accent leaves something to be desired. Powers Boothe (who went on to play memorable bad guys in 24 and Deadwood) and Michael Biehn play the lead villains in the film (Curly Bill Brocius and Johnny Ringo). In addition to Dana Delaney, who I mentioned above, the supporting cast also includes Charlton Heston, Thomas Haden Church, Billy Bob Thornton, John Corbett, Billy Zane, Terry O’Quinn, Michael Rooker and Jason Priestley. Seriously, look at all of those names – I’m sure you didn’t know that a few of those guys were in this movie.

The film has a few bonus features, but nothing too exciting. The original trailers and TV spots are included, as well as the director George P. Cosmatos’ storyboards. There is also a making-of featurette, creatively titled “The Making of Tombstone.” It is broken up into three parts – “An Ensemble Cast,” “Making an Authentic Western” and “The Gunfight at the O.K. Corral.” The featurettes have a few little interesting tidbits in them, but overall, there just isn’t much to them. Anyone looking for any in-depth documentaries or a myriad of bonus features will definitely be disappointed.

So if you haven’t seen Tombstone in a while (or if you have never seen it), I recommend revisiting it on Blu-ray. It’s a solid Western with a great cast that stands the test of time. But if you already own it on DVD, I can’t really say it’s worth the upgrade. 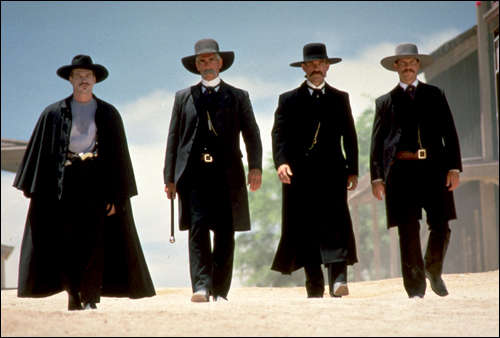 Written by Joel Murphy. Tombstone is available now on Blu-ray.